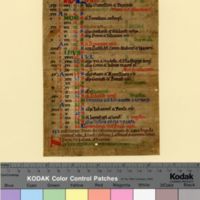 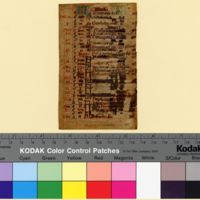 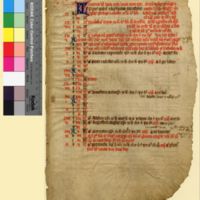 Contents: May: line 9, "secundum usum sarum.," line 11, "in festo reliquiarum eiusdem ecclesie sarum." Lessons counted up to nine; the "capitulum" of the feast is cited.

Calendars were important features for both religious and secular works. They could be found in the openings of liturgical books, histories, and theological treatises. The calendars helped medieval people organize their crop planting and harvesting and also helped ensure they observed religious holidays on the correct day. Religious holidays varied by region because many local churches chose which saint feast days to celebrate. Medieval Christians followed the calendar of ancient Rome, known as the Julian calendar (after Julius Caesar). The Julian calendar is a solar calendar that measures the passing of a year based on the number of days it takes for the sun to end up in the same position in the noonday sky, which occurs every 365.25 days. Months are then assigned an arbitrary number of days and these days are further adjusted to fit within the assigned seasons.

Medieval calendars use the Roman numbering system. The abbreviation KL appears at the top of medieval calendar pages. KL stands for kalends, which was the first day of the month. The calendar also includes nones, either the fifth or seventh day, and ides, the middle of the month. Holidays were counted by measuring how many days they fell before or after kalends, nones, or ides.[1] 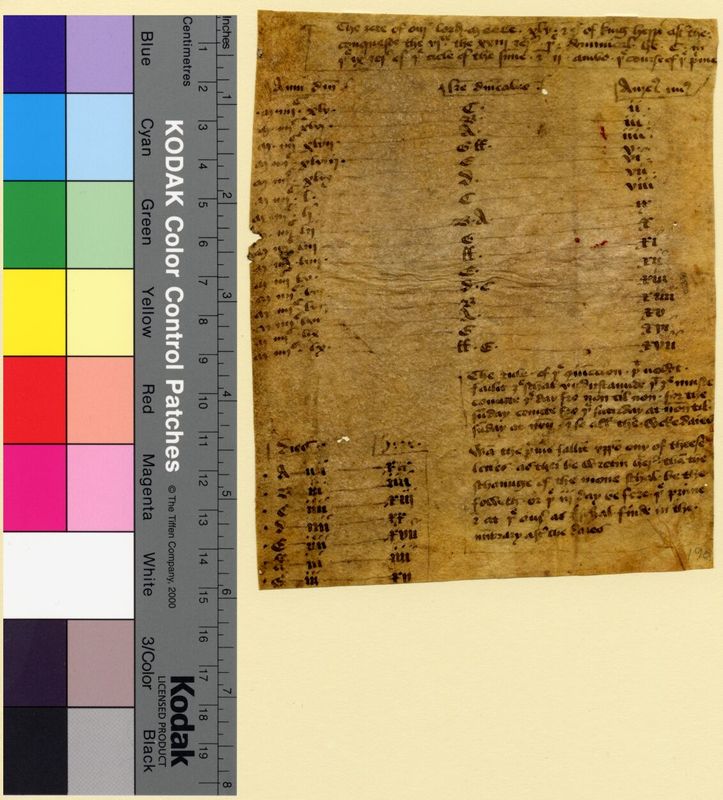 Many medieval calendars also contain the Golden Numbers. The Golden Numbers help find the date of Easter since it was not a fixed holiday. The date is dependent on the lunar cycle, rather than the solar. Easter was celebrated on the first Sunday after the first full moon following the Spring Equinox. The Golden Number provides the date of the new moon followed 14 days later by the full moon. The Golden Numbers appear in the column all the way to the left and are given in Roman numerals from one to nineteen. Dominical letters, from the Latin Dominica for Sunday, are used to track Sundays throughout the year. They appear in another column and are lettered from “a” to “g.” The letters begin on January 1, if that day is a Sunday, then each time the “a” appears on the list indicates Sunday (an exception to this is during a leap year).[2] 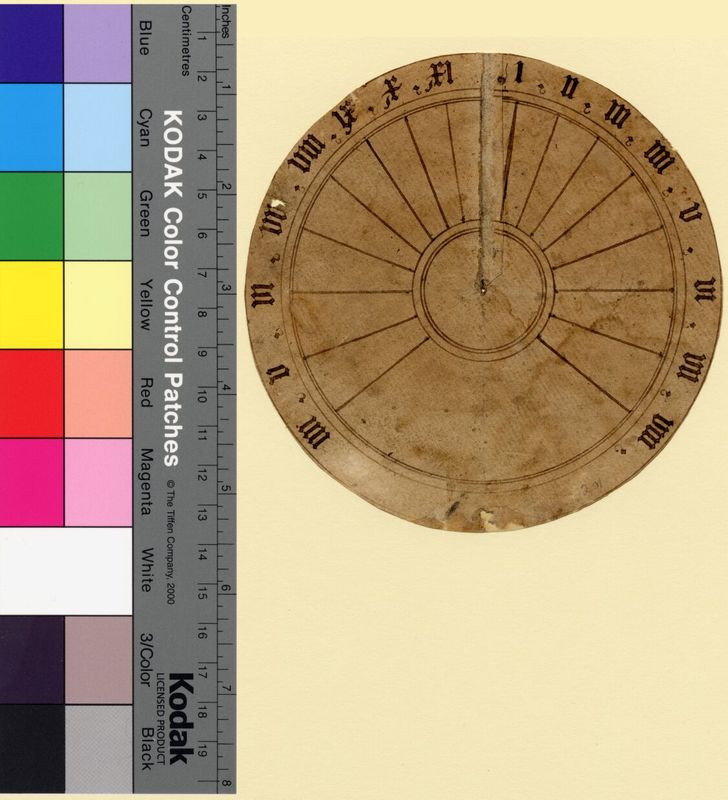 A volvelle is constructed of a series of paper or parchment circles with rotating parts (the term volvelle comes from the Latin volvere, to turn). The introduction of volvelles to the medieval west came through Spain, which—at the time—was a multi-cultural hub, with areas controlled by Christian rulers and Muslim rulers. Philosophers and intellectuals living in Spain gathered a compendium of knowledge from ancient Greek, Roman, and Near Eastern sources. The Christian, Muslim, and Jewish populations of medieval Spain lived in convivencia, a term meaning peaceful coexistence. The Muslim rulers allowed all religions to worship, so long as they paid a tax. Although certain areas of medieval Spain seemed more accepting of other religions and cultures, Christians attempted to reconquer lands in Spain ever since the establishment of Islamic control in the eighth century.

The first example of a volvelle is illustrative of this history. The philosopher Ramon Lull (1232/33-1315) wrote a work called the Ars (the Art) and included a volvelle as one of four figures. The volvelle consisted of three concentric circes with letters "B" to "K" that were representative of attraibutes of God and principles shared by Christianity, Islam, and Judaism. Lull used the volvelle as a missionary tool to bring the Muslims to the Christian fold.[3]

Volvelles were more commonly used to keep time. For isntance, Matthew Paris included a volvelle in the Chronica Majora (Major Chronicles), a chronicle of events in Europe between 1235-1259. A volvelle appears in a thirteenth century copy of Chronica at Corpus Christi College, Cambridge.[4] Paris’s volvelle includes eleven rotating concentric circles that were used to calculate the date of Easter.

These examples show the many roles volvelles could take. Volvelles were also used as ciphering systems and as “wheels of fortune,” which showed the changing fates of people as the wheel changed position.[5] The Fragmenta Manuscripta volvelle appears to have been used as a time keeping method like the one in Matthew Paris’s Chronica. Unlike the example in the Chronica, the Fragmenta volvelle was not used to calculate the date of Easter, but instead appears to have been used as a sundial. 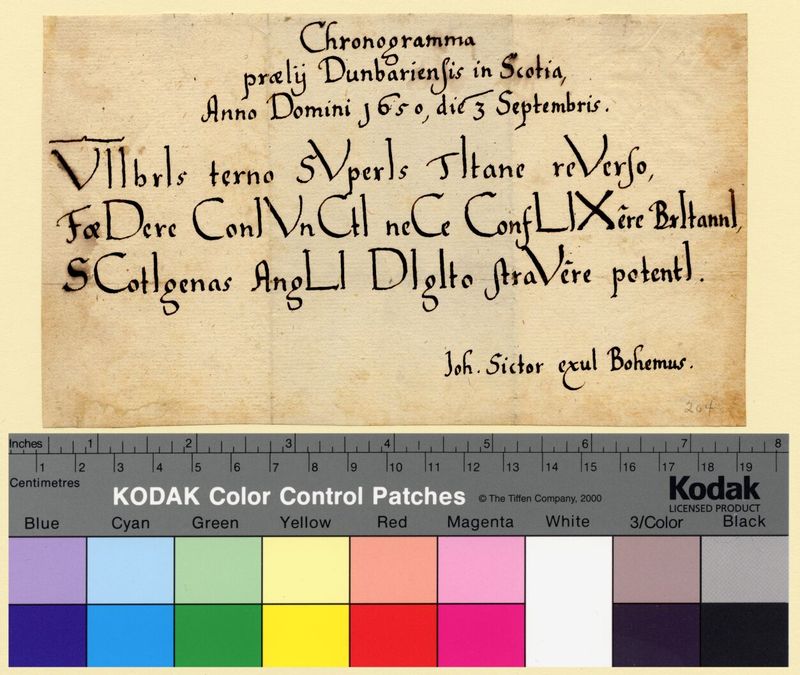 A chronogram is another method of time keeping. Chronogram derives from the Greek words chronos meaning time and gramma meaning letter—a chronogram is “time writing.” The words in a chronogram contain Roman numerals that form dates. Chronograms were first used in Europe by the Romans who recorded important dates in their epitaphs. They reached the height of the popularity in Europe from the sixteenth to eighteenth centuries. One example commemorates the death of Queen Elizabeth I in the year 1603. The chronogram reads, “My Day Closed Is In Immortality.” The first letter of each word gives the Roman numerals: MDCIII (1603).[6] Elizabeth’s chronogram is easy to read, since the first letter of each word is the corresponding Roman numeral. In other chronograms, the capital letter can appear in any part of the word, as it does in the Fragmenta Manuscripta example. When you remove the capital Roman numerals from the words, you get the date: VIII+VI+IV+D+C+IV+CI+C+C+LIX+I+S+C+I+LI+DII+VI= 1650. This is the date of the Battle of Dunbar that marked the beginning of civil war in Britain between those who wanted to restore the monarchy after the execution of King Charles I and others who supported the parliament of Oliver Cromwell. The supporters of the monarchy lost the battle, but warfare continued until the monarchy was finally restored with King Charles II (son of the executed King) in 1660.

[3] Gianfranco Crupi, “Volvelles of Knowledge. Origin and Development of an Instrument of Scientific Imagination (13th-17th Centuries),” JLIS. it 10, 2 (May 2019): 3-5; Rheagan Martin, “Decoding the Medieval Volvelle,” The iris. Behind the Scenes at the Getty. July 23, 2015. https://blogs.getty.edu/iris/decoding-the-medieval-volvelle/.

[6] Susan Reed, “It All Adds Up: A Quick Look at Chronograms,” The British Library, European Studies Blog, 19 February 2019, https://blogs.bl.uk/european/2019/02/it-all-adds-up-a-quick-look-at-chronograms.html.