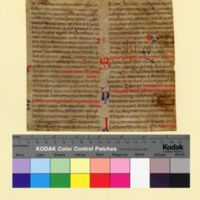 Gratian (d. before 1159) was an Italian monk and scholar known for his contributions to canon law. He became a Benedictine monk and was a lecturer at the Monastery of Saints Felix and Nabor in Bologna. During his time there, he compiled the Concordia discordantium canonum or the Decretum, a compendium that gathered together the sets of rules—or canons—for the church. [1] The Decretum was consulted by Church officials to ensure that they were telling members of their communities the appropriate courses of action for their transgressions.