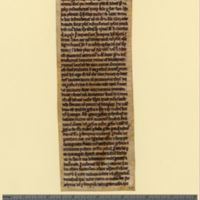 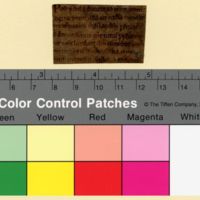 Peter Lombard (c. 1100-1160) was bishop of Paris, teacher of theology, and canon of Notre Dame, Paris. He wrote the Sententiarum libri IV (The Four Books of the Sentences), which soon became the central textbook for theology in the Middle Ages. Two leaves in the collection contain passages from this crucial text.

Peter organized the four parts of the Sentences by theme. Book I concerns the nature of God, predestination, and evil. Book II covers the creation, angels and demons, grace and sin. Book III deals with the incarnation, redemption, virtues, and the ten commandments. Finally, Book IV discusses the sacraments, the last judgement, and heaven and hell.[1] Peter used the popular quaestio technique in which a problem is posed in the form of a question and answers are given for and against the problem. After considering the supports given for each response, Peter then provides his conclusive answer on the subject. The Sentences provided students with a quick reference guide to the accepted orthodox doctrine.[2] All students were required to write a commentary on the Sentences to obtain a Doctor of Theology.[3] Peter Lombard was influential to the scholastic thinkers like Thomas Aquinas and Bonaventure. See Philosophy and Theology for a larger introduction to the topics discussed here.