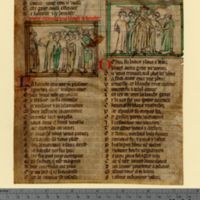 Jean de Meun and Guillaume de Lorris are the authors of the popular romance Roman de la Rose or Romance of the Rose. Guillaume de Lorris was the initial author, composing about 4,000 lines of the allegorical poem around 1225-1230. His name tells us that he came from the town of Lorris in France, however, nothing else is known about his life. His name only survives thanks to the second author of the romance—Jean de Meun.[1] Like Guillaume, little is known about Jean’s life. He was a scholar who is also known for translating works from Latin into French. Jean picked up after Guillaume’s death and composed the remaining 17,000 lines of the poem between 1269-1278. His continuation engaged with ancient texts, incorporating the stories of Venus and Mars, Dido and Aeneas, and Pygmalion and the statue. He also shows an interest in current scholarly debates regarding such things as celibacy as the most virtuous path to heaven. Jean relegates this debate to Genius and Nature in his poem. Nature finds that chastity is unnatural, because if everyone was chaste, all species would eventually die out (an argument supported by leading philosophers at the time like Thomas Aquinas). There is no resolution to the matter in the poem, Genius finally exclaims, “Let Theologians come and theologize about it: they will never reach a conclusion.” Though it is clear from the amount of space Jean uses to discuss this issue that he found the idea of chastity for all to be untenable.[2] For more on the Roman de la Rose, see Poetry and scroll down to "Chivalric Romances."