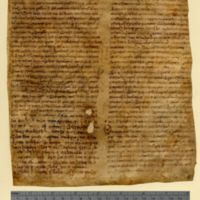 Bede (673-735) was an Anglo-Saxon scholar and teacher from Jarrow, Northumbria. His best-known work Ecclesiastical History of the English People earned him the sobriquet “father of English history.” He also wrote commentaries on scripture and grammatical treatises, like de Orthographia, featured in FM 002. He was influenced by many Greek writers in de Orthographia including Diomedes, Caper, and Agroecius. The first part of the work contains what is known today as orthography—the conventions for spelling within a language. The rest of the rest of the work contains an alphabetical handbook of usage.[1]