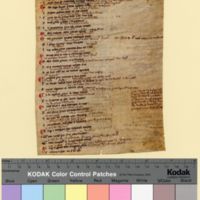 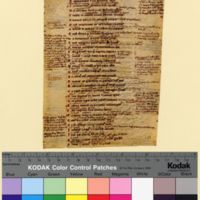 Alexander de Villa Dei(c. 1170-1240) was born in Villedieu in Normandy (he is also known as Alexander of Villedieu). He was a grammarian, poet, and mathematician.[1] He studied in Paris, became a Franciscan, and a Master of the University of Paris. He wrote the Doctrinale puerorum (Teaching manual for Boys) around they year 1200 to instruct boys on the laws of grammar in 2645 lines.The Doctrinale became an important book for teaching Latin grammar at schools and universities.  The text was divided into four parts. The declensions and conjugations constitute Part 1 (chapters 1-7); agreement and syntax form Part II (Chapters 8-9); prosody is in Part III (Chapter 10); finally, Part IV (chapters 11-12) discusses placement, figures of speech, and faults of style.[2]

There are over 400 surviving manuscripts that contain the entire work or a portion of it.[3] The folia in the Fragmenta Manuscripta collection provides some evidence for the popularity of the text. FM 068 contains several lines (1668-1721) from Part III, Chapter 10 on prosody. The text of the Doctrinale is supplemented with a commentary on FM 138, showing that the text was so well-known that other people wrote additions to it. [4]