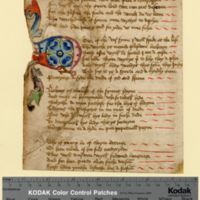 Peter Idley (d. c. 1474), an English poet, wrote the didactic poem Instructions to my Son c. 1450. The first part of the poem is based on two treatises by Albertano da Brescia (consolationis and Liber de amore Dei). The second part includes a reworking of Robert Mannnyng of Brunne’s Handlyng synne and John Lydgate’s The Fall of Princes.[1] There are a few extant manuscripts of the poem.[2] The leaf in the Fragmenta Manuscripta collection has been identified as the missing folio that once rested between ff. 132 and 133 in the manuscript held at Magdalene College Library, Cambridge.[3] The Fragmenta leaf contains Book II, B, verses 2486-2541.[4] For more on medieval poems, see Poetry.

[4] The leaf is transcribed in Jones, “Peter Idley’s Instructions to his son.”