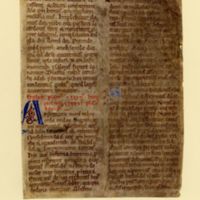 Flavius Magnus Aurelius Cassiodorus (c. 487-583) was a statesman and scholar. He was a consul in Rome in 514, and in 526, the Ostrogothic king Theodoric appointed him chief of his civil service. Cassiodorus composed several works that serve as propaganda to Theodoric’s reign, providing justification for the Ostrogothic takeover of Italy. Perhaps his greatest influence on the later medieval period was his pedagogic manual where he divided the seven liberal arts into the trivium (consisting of three disciplines: grammar, logic, and rhetoric) and the quadrivium (arithmetic, geometry, music, and astronomy).[1]

Fragmenta Manuscripta 014 features a passage from Cassiodorus's Commentary on the Psalms (In psalterium expositio), written between c. 538-548, with later sections added between 560-570. The commentary was meant to be a helpful reference for monks in the reading of the psalms.[2] The text is divided into three volumes that each contain commentary on fifty psalms.[3] The Fragmenta Manuscripta leaf contains psalms 135-136.