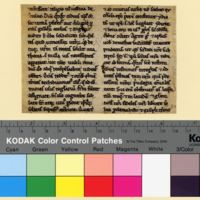 Arnulf of Lisieux (1104/1109-1184) was born in Normandy, was Bishop of Lisieux, a crusader, and an advocate for several kings and popes during his lifetime. He supported King Stephen of England during the period known as The Anarchy when the throne of England was fought over between two cousins, Stephen and the Empress Matilda. Arnulf also intervened during the controversy with King Henry II (the Empress’s son) and Archbishop Thomas Becket. Arnulf’s waffling support to the king and to the archbishop in this matter aided in the decline of his popularity in his later life. Arnulf had more success supporting Pope Alexander III during another catastrophic event that pitted the papacy and Lombards against Emperor Frederick Barbarossa and his attempted conquest of Italy. Barbarossa supported another pope, and was therefore excommunicated. After burning the city of Milan in 1162, Barbarossa was defeated by the Lombards in 1176 and submitted to Pope Alexander III. Arnulf of Lisieux wrote letters (or epistulae)  in support of Pope Alexander III during this conflict (for more click here). He also wrote the Invectiva in Giradum Engolismensem episcopum, a pamphlet written against the antipope Anacletus II. The Invectiva was circulated by other ecclesiastical authorities including Bernard of Clairvaux.[1]