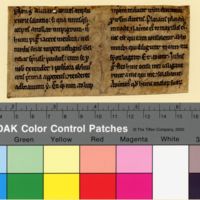 Ambrose of Milan (c. 340-397) is one of the Fathers of the Church, noted for his defense of the Catholic faith against heretics. He became bishop of Milan in 374 and held the office until his death around 397.

This fragment in the collection is part of Ambrose’s work de Poenitentia or Concerning Repentance. Ambrose wrote against what became known as the Novatian heresy after Novatus, the bishop of Rome. Novatus and his followers refused the administration of penance to those who had left the Christian Church. Ambrose wrote against this extreme view, citing the merciful character of God.

See "Penitential" under Canon Law for more on penances.