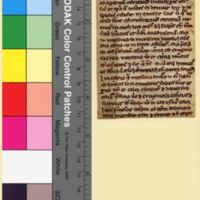 Greek philosopher and scientist Aristotle (384-322 BCE) was one of the most influential philosophers of the Middle Ages (though he lived centuries before its inception!) Aristotle studied under Plato (c. 428-c. 348), another influential Greek philosopher. Plato's texts were more widely known in the early medieval period. The spread of Aristotelian teaching in the west is indebted to Islamic philosophers who had translated Aristotle’s original Greek into Arabic. Working from the Arabic, Spanish translators produced Latin editions, with most of the works being available in Latin by the end of the twelfth century. The translations included many of Aristotle’s works that were not previously known in medieval Europe, including the logical writings of the Organon, the Metaphysics, and the Physics. Translations of the commentaries of the Islamic philosopher Ibn Rushd, known as Averroes (1126-98), were also fundamental to the rediscovery of Aristotle in the west.[1] The circulation of these new translations formed the basis of the curriculum at the emerging universities. Aristotle was the first philosopher to formulate a system of logic, which influenced the development of Scholasticism that sought to blend classical texts with the teaching of the Church and promote piety and scholarship. Scholastics were encouraged to pose questions regarding religion, provide opposing answers, and a resolution that logically considered all the points and provided profs. Using this system of logic, Scholastics like Thomas Aquinas wrote proofs of the existence of God.[2]

For more, see Philosophy and Theology.

[1] Averroes is also possibly the means through which Galen’s texts were transmitted in the west of Europe during the Middle Ages.