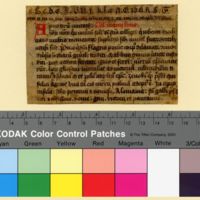 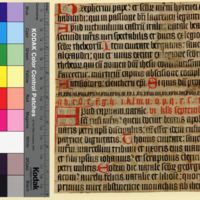 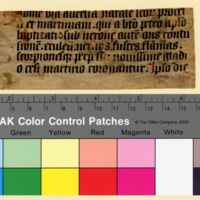 Usuard (d. c. 877) was a monk at the Benedictine Abbey of Saint-Germain-des-Prés. He wrote the Martyrology in 858 and continued to make additions to the text until his death in 877. It is dedicated it to the Emperor Charles the Bald, who may have also been the patron. Martyrologies are liturgical books that are organized into calendars that record the feast day of the saints. Usuard added short accounts of the saint's life that would be read during services on the saint’s feast day. The Martyrology includes over one thousand saints.[1] Martyrology was a very popular text, as evidenced by the nearly 200 surviving manuscripts and its influence on the later Roman Martyrology.[2] Usuard also wrote a grammatical treatise called Ysagoge or Artis grammaticae introductions.[3] See Grammar Instruction for an introduction to medieval grammar.