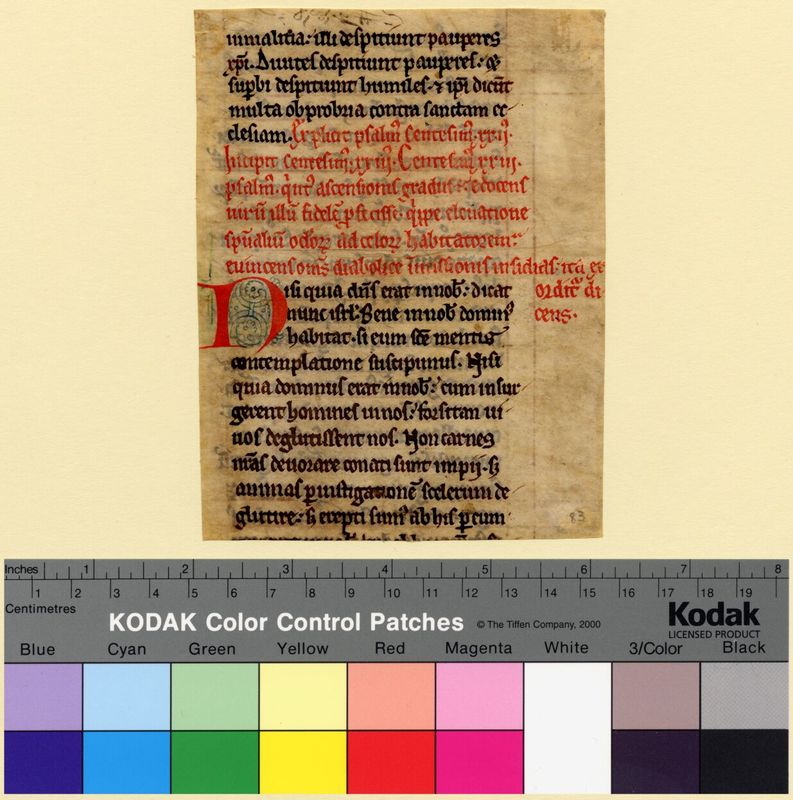 Forming the Fragmenta Manuscripta Collection and How it Came to Columbia, MO.

The history of the collection begins with John Bagford, an English book collector around the turn of the eighteenth century. Bagford had a collection of manuscript fragments and had ambitions to write a history of the development of printing from handwritten manuscripts to the invention of the moveable type. In an essay dated to 1707, Bagford writes that he gave his collection to the Archbishop Tenison Library at the church of St. Martin-in-the Fields in the center of London. In the letter, Bagford wrote that the collection was, “perhaps the first of that kind that ever was done in any part of Europe.” The collection showcasing the development of printing that Bagford left to the library included two volumes with manuscript fragments ranging in date from the eighth through the seventeenth centuries. One of these volumes contained Fragmenta Manuscripta.

The two volumes sat on the shelves of Tenison library collecting dust for over a century and a half before the librarian at the time wrote to the trustees stating that the books and the manuscripts in the collection were, “in a state of great derangement.” The fragments were apparently pasted down on blank pages so that only one side of the folio could be viewed. the librarian from 1847-1854, Reverend Philip Hale, urged for rebinding.  By 1853, Fragmenta Mansucripta was rebound along with its sister volume, Fragmenta Varia, and both were given their current titles (perhaps for the first time).  Fragmenta Manuscripta eventually came to Columbia, MO, while the second volume is located at the University Library at Cambridge.

From the Tenison library Fragmenta Manuscripta parted ways with Fragmenta Varia and ended up in the great library of manuscript collector Sir Thomas Phillipps in 1861. In 1913, Sir Sydney Cockerell, the director of the FitzWilliam Museum in Cambridge, bought the collection. Cockerell and his consultants reasearched the leaves in the collections and left their marks in the margins by numbering the leaves and leaving miniscule notes.[1]

Fragmenta Manuscripta left Cockerell’s collection on April 3, 1957 at a Sotheby’s sale and included 207 pieces. From 1957 to 1968, the collection was passed on from one collector to the next. In 1968, Fragmenta Manuscripta arrived at its current home at the Special Collections and Rare Books Library at The University of Missouri, Columbia. At some unknown point after the Sotheby's sale in 1957 the collection gained ten additional leaves. The 217 leaves now exist removed from the nineteenth century binding for better conservation and display.

Fragmenta Manuscripta has now entered the digital age.  Digital Scriptorium, hosted at the University of California, Berkley Library, has a record of manuscripts from participating universities across the United States. Digital Scriptorium has pictures and basic information for each fragment in Fragmenta Manuscripta as part of a collection of over 8,000 manuscripts.[2]