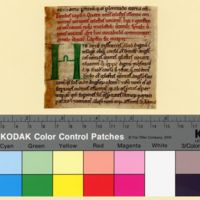 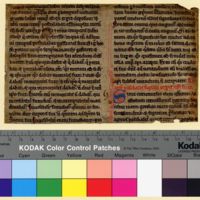 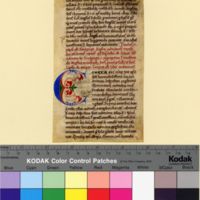 Hugh of St. Victor (c. 1096-1142) was a theologian and an Augustinian canon in Paris. Little else is known about his life. The collection contains a fragment of his most influential work De sacramentis christianae fidei (On the Sacraments of the Christian Faith), often regarded as the first theological summa (a summary of a subject) in the Middle Ages. Hugh compiled the works regarding the sacraments from all authorities, including Augustine (354-430) and the Pseudo-Dionysius (5th century).[1] He also wrote a commentary on the Pseudo-Dionysius’s De Coelesti Hierarchia (On The Celestial Hierarchy) (FM 026, 071), which organizes the angels into three hierarchies with each hierarchy further divided into three. The first hierarchy (the one closest to god) contains the seraphim, the cherubim, and the thrones. The second hierarchy contains the dominations, the virtues, and the powers. The final hierarchy includes the principalities, the archangels, and the angels who are most concerned with humans.[2] Hugh of St. Victor’s commentary On the Celestial Hierarchy shows its continued relevance in the eleventh and twelfth centuries. Other intellectuals also referenced the Celestial Hierarchy, for instance, Thomas Aquinas used it in his Summa Theologica.[3]

[3] For more, see Philosophy and Theology.