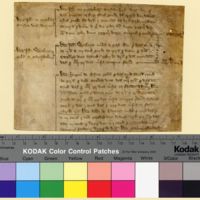 Edward III, King of England from 1327-1377, inherited the wars of his father and grandfather (Edward II and Edward I). One problem close to home was the warring Scots who sought to maintain the independence of their kingdom. During the Scottish War of Independence, the French assisted the Scots in their fight against the English, an alliance which created more hostilities between France and England. The hostile relationship exploded in 1337 when England and France entered into what would become known as the Hundred Years War—even though it was waged over one hundred years, from 1337-1453. These two wars provide enough context to understand why a royal document of Edward III, Fragmenta Manuscripta 137, discusses his soldiers serving in France.

Barrow, G.W.S. Robert Bruce And the Community of the Realm of Scotland. Edinburgh:Edinburgh University Press, 1965.