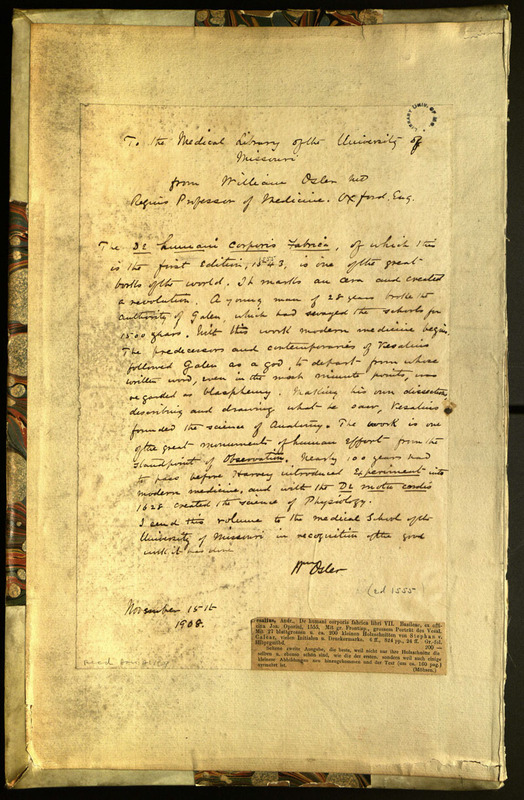 Letter from William Osler donating the 1555 copy of De Humani Corporis Fabrica to the University of Missouri Medical Library, 1908.

Often called "the Father of Modern Medicine," William Osler was a Canadian physician, pathologist, and internist who established the programs of clinical clerkship and medical residency still in use in medical schools today. One of the four founders of Johns Hopkins University School of Medicine in Baltimore, Maryland, he continued his career as the Regius Professor of Medicine at Oxford University and later was conferred a baronetcy and knighted.

Osler donated a copy of Vesalius' seminal work, De Humani Corporis Fabrica, to the University of Missouri Medical School Library in 1909. In his entry on Vesalius in the Bibliotheca Osleriana, a catalogue of the books in his extensive collection, he mentions donating a copy to the University of Missouri "to my old student and friend Calvert, at that time Professor of Anatomy." He indicates in the Bibliotheca that at the time, copies of the De Fabrica were "numerous and very often appear in sale catalogues at prices ranging from 10 to 20 varying with the condition." It is safe to say that the days of buying a first edition of Vesalius' work for $30-$40 are long over.

There is a bit of mystery involved with the MU De Fabrica. In his original letter to the Medical Faculty, Osler mentions that he is sending a first edition, published 1543. In fact, the volume he sent was a second edition, published in 1555, as evidenced by the frontespiece and the number of lines per page. The 1543 edition has 57 lines per page, the 1555 has 49. There are also differences in the frontespiece between the first and second editions, the most notable being the staff held by the skeleton in the center of the image, which changes from a pole to a scythe, as well as content differences between the two editions. The MU De Fabrica was rebound sometime in the 18th or 19th century, however, and the spine was stamped 1543 in Roman numerals. Whether this was a mistake or was done to fool unwary buyers is unknown.

Osler purchased a number of De Fabricas in his lifetime, and was a well-known and expert collector of rare medical texts. It is unlikely that he would not have known the difference between the 1543 and 1555 editions of the book. It is equally unlikely that he would have deliberately sent one volume masquerading as the other. Perhaps he simply grabbed and sent the wrong one. At any rate, the gift was a priceless one in honor of a much-favored student and friend, and is a wonderful addition to the MU Library collection.

Osler was known to buy works for libraries whose collections were lacking particular volumes, or to encourage other philanthropists to donate them. His own library eventually numbered 8000 volumes, which he detailed in an extensive bibliography called the Bibliotheca Osleriana. Osler's collection was donated to McGill University upon his death where it forms the core of the Osler Library of the History of Medicine.