A Tale of Two Title Pages 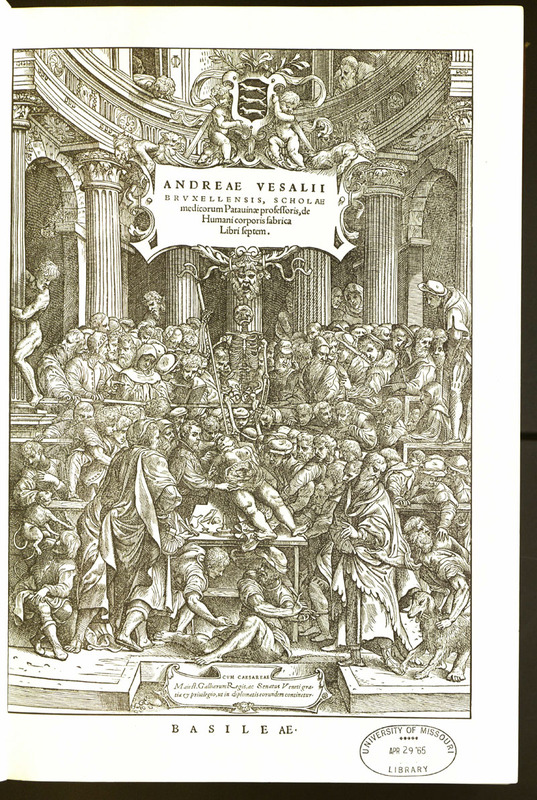 The title page of the 1543 edition of Vesalius' De Fabrica is famous in its own right. Depicting an anatomical theatre  in Padua, it is both a subtle rebuke of the traditional form of anatomical teaching and a celebration of the art dissection.

Prior to anatomists like Vesalius, dissection was taught by a professor seated above the cadaver in a throne or pulpit-like chair while reading from Galen, the Greek anatomist who strongly influenced the medicine of the time. Barber-surgeons did the actual cutting and dissection work as the professor pointed out various structures. Vesalius believed that anatomy was the foundation of medicine and that only through hands-on dissection could one properly learn the anatomical structures of the human body. The title page of the 1543 celebrates the ascension of dissection, by bringing the body to the center of the work.

Vesalius is pictured dissecting and lecturing, as the bearded figure to the left of the cadaver. The cadaver, which is female, is unusual because of the difficulty in obtaining female corpses. According to the text of Book V, she was "in fear of being hanged and falsely declared herself pregnant." Determined by midwives to not, in fact, be with child, she was presumably hung and handed over to Vesalius for use as an anatomical specimen. Underneath the dissection table, the unused barber-surgeons are now reduced to sharpening the anatomist's razors.

The central figure of the skeleton occupies the place of honor where normally the anatomist would sit and lecture, emphasizing Vesalius' belief not only in learning-through-doing but also his conviction that the skeleton should be the beginning of any study of anatomy. In the first edition, the skeleton holds a pole as directed by Vesalius "for a more picturesque appearance." Directly around the table are Vesalius' students, and the large figure to the left of the table in front is believed to be Augsburg patrician Wolfgang Herwart. The man turning to catch the pickpocket with the dog on the right is philosopher Marcantonio Genua; Hewart and Genua were both friends of Vesalius who helped with the preparation of the De Fabrica. The dog on the right and the rhesus monkey on the left represent Vesalius' non-human dissection work, and the nude figure clinging to the pillar on the left may represent the surface anatomy of the human body.

The anatomical theatre itself is filled with gawkers and onlookers who would attend public dissections, including a nun in religious garb and a bearded figure wearing Jewish attire who may be Vesalius' friend Lazarus de Frigeis, a physician. At the top, a frame encloses the title, reading "Andreas Vesalius of Brussels, scholar, Professor of Medicine at Padua, Seven Books on the Fabric of the Human Body." 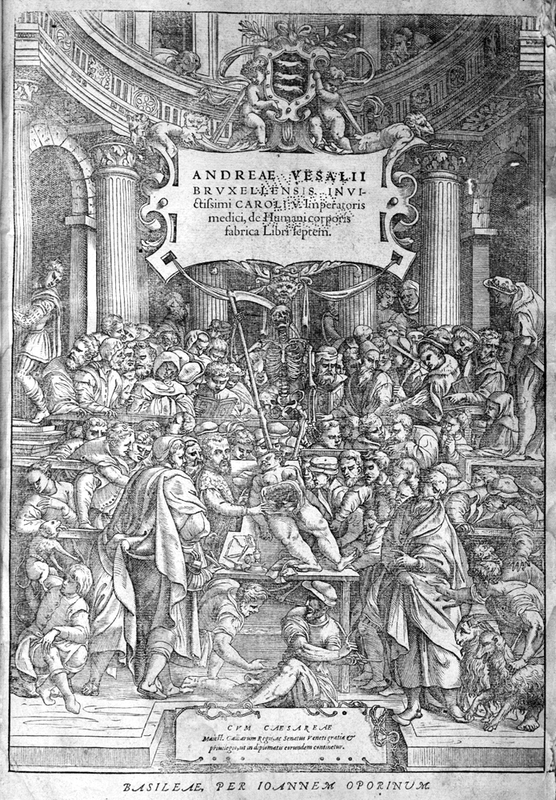 The second edition of the De Fabrica replaced the original title page with a new one, perhaps commissioned on behalf of the printer Oporinus. Why he chose to replace the title page is unknown; the original wood blocks were in existence until their destruction in an air raid on Munich in 1944, so they were not lost or broken. Although the title page is similar in outline to the original, there are some striking differences.

Perhaps most noticeable is the replacement of the pole held by the skeleton with a scythe, commonly used in the iconography of death. Vesalius' head has grown to impossible proportions in comparison with the rest of his body, and seems to have been copied from his portrait in the original 1543 edition. The anatomical tools on the dissection table have been changed into a piece of paper with writing on it, possibly because the engraver did not understand what they were supposed to represent. The nude figure in the first edition has been inexplicably clothed, and a sheep has been added next to the dog in the lower right.

Aesthetically, the lines are more coarse and the engraving is far less fine than in the original. The title is presented as "Andreas Vesalius of Brussels, doctor of medicine of the invincible Charles V, Seven Books on the Fabric of the Human Body," reflecting Vesalius' new position as physician to the court of Charles V. The name of printer, Joannes Oporinus, appears as well at the bottom of the page, a fitting concession to the quality of his work.