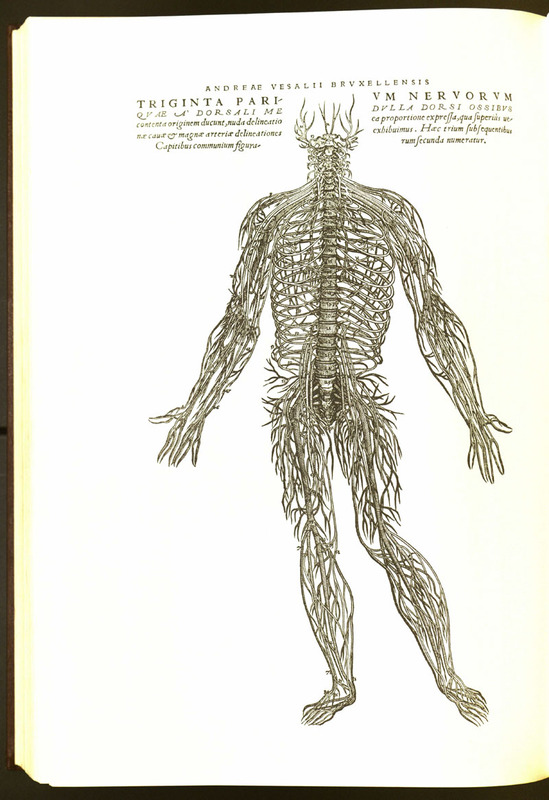 Upon its publication in 1543, the De Fabrica was both a commercial success and the subject of immense criticism. 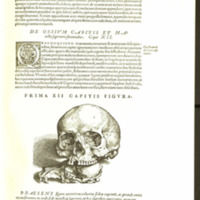 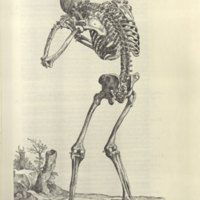 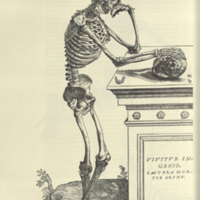 Sometime around 1540, Vesalius began work on what was to become one of the most influential and famous anatomies ever published. Feeling that anatomy was the basis of the practice of medicine, he set out to produce a text that would both illustrate the major anatomy of the human body and contain detailed instructions for dissections. Detailed illustrations were included both because of the scarcity of dissection materials and because the work was planned to be a teaching tool.

Vesalius worked closely with the Venetian artists who illustrated the De Fabrica. Although the individual artists are not known, the woodcuts are now attributed to the studio of Titan. The process was undoubtedly exacting and fraught with conflict, as Vesalius stated in his work "Letter on the China Root," where he states "[No longer] shall I have to put up with the bad temper of artists and sculptors who made me more miserable than the bodies I was dissecting."

Upon completion of the wood blocks for engraving, Vesalius sent them to the renowned printer Joannes Oporinus in Basel, Switzerland. Although this required that the delicate wood blocks from the Venetian artists and engravers had to be sent over the Alps, Oporinus was chosen because of the quality of his work and the international reputation of his printing house. Oporinus himself was a scholar and his published texts were free from errors. Vesalius traveled to Basel in 1543 and stayed to personally oversee the publication. The type was set and the book was finished in June or July of 1543, and was dedicated to the Emperor Charles V.

The volume itself is arranged in seven "books" or chapters, each focusing on one aspect of the human body. It did not follow the normal progression of the medieval anatomies, but began with the bones, which Vesalius felt to be the beginning of any study of anatomy. It then proceeds through the ligaments and muscles, veins and arteries, digestive, urinary, and reproductive systems, heart and respiratory organs, and the brain. Aside from the illustrations, the book itself is aesthetically beautiful, incorporating whimsical initial capitals and an engraved frontespiece that is famous in its own right.

Upon its publication in 1543, the De Fabrica was both a commercial success and the subject of immense criticism, due to its refutation of many of Galen's anatomical observations. Many critics, including his former professor Jacques Dubois, from whom he had ironically learned the importance of hands-on dissection and observation. Upon his return to his teaching post at Padua, he relinquished his post and was appointed to the post of physician at the Imperial Court of Charles V. The criticism of the new "Vesalian anatomy" caused him so much grief at Court that before leaving, he burned all his papers.

"As to my notes, which had grown into a huge volume, they were all destroyed by me...I was on the point of leaving and going to Court; those physicians of whom you know had given the Emperor and nobles a most unfavorable report of my books and of all that is published nowadays for the promotion of study; I therefore burnt all these works mentioned, thinking at the same time it would be an easy matter to abstain from writing in the future. I have since repented more than once of my impatience, and regretted that I did not take the advice of the friends who were then with me." Andreas Vesalius, Letter on the China Root