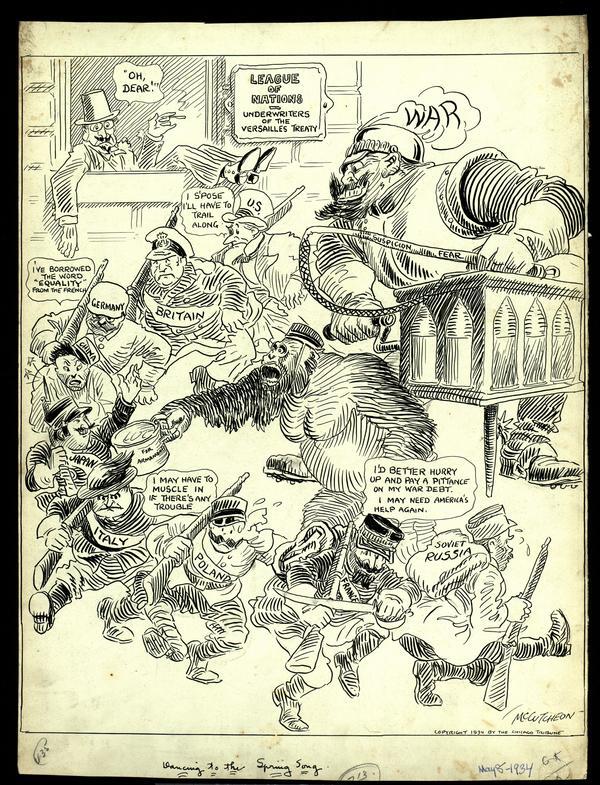 Title from caption, “Dancing to the spring song”

This editorial cartoon is depicting men who represent the United States, Britain, Germany, China, Japan, Italy, Poland, and Soviet Russia dancing around “War” who plays the organ grinder. The League of Nations watches the event from a window and says “Oh, Dear!” Traditionally an organ grinder plays the instrument as monkeys dance around in a circle.[1] In this cartoon the nations are the ones dancing round. The dance is led by Soviet Russia and followed by France who is worried about needing America’s help if there is another war. Italy is following behind and worries that they may have to get involved if there is any trouble. At the very end of the trail is Uncle Sam who is worried that the United States might have to trail along and get involved in the second World War. The League of Nations watching from the window, is seating next to a sign that reads “underwriters of the Versailles Treaty.” This provides context for why the League of Nations would be shocked at the possibility of a second World War given that the Treaty of Versailles ended World War I. Within the treaty, Nations would be responsible for paying their war debts which is depicted in the statement given by France, “I’d better hurry up and pay a pittance on my war debt. I may need America’s help again.” Additionally, the monkey next to the War organ grinder is collecting money “for armaments.” This alludes to the concept that armament for war is the main concern for the next World War.

McCutcheon was no stranger to making cartoons on political matter. However, in approaching the subject of a second World War, he was careful in his constructs. This cartoon was published to the Chicago Tribune on May 8, 1934 which is five years prior to the start of World War II. In covering global politics and speaking of another World War, McCutcheon was attempting to get his audience concerned on the topic. In 1934, many Americans were beginning to see a hopeful future. The Great Depression had come to an end and the last thing on the minds of Americans was another World War. The Americas were aiming for neutrality on any foreign issue and did not seek involvement in any issues. However, America was too strong to be impartial in the matters.[2]