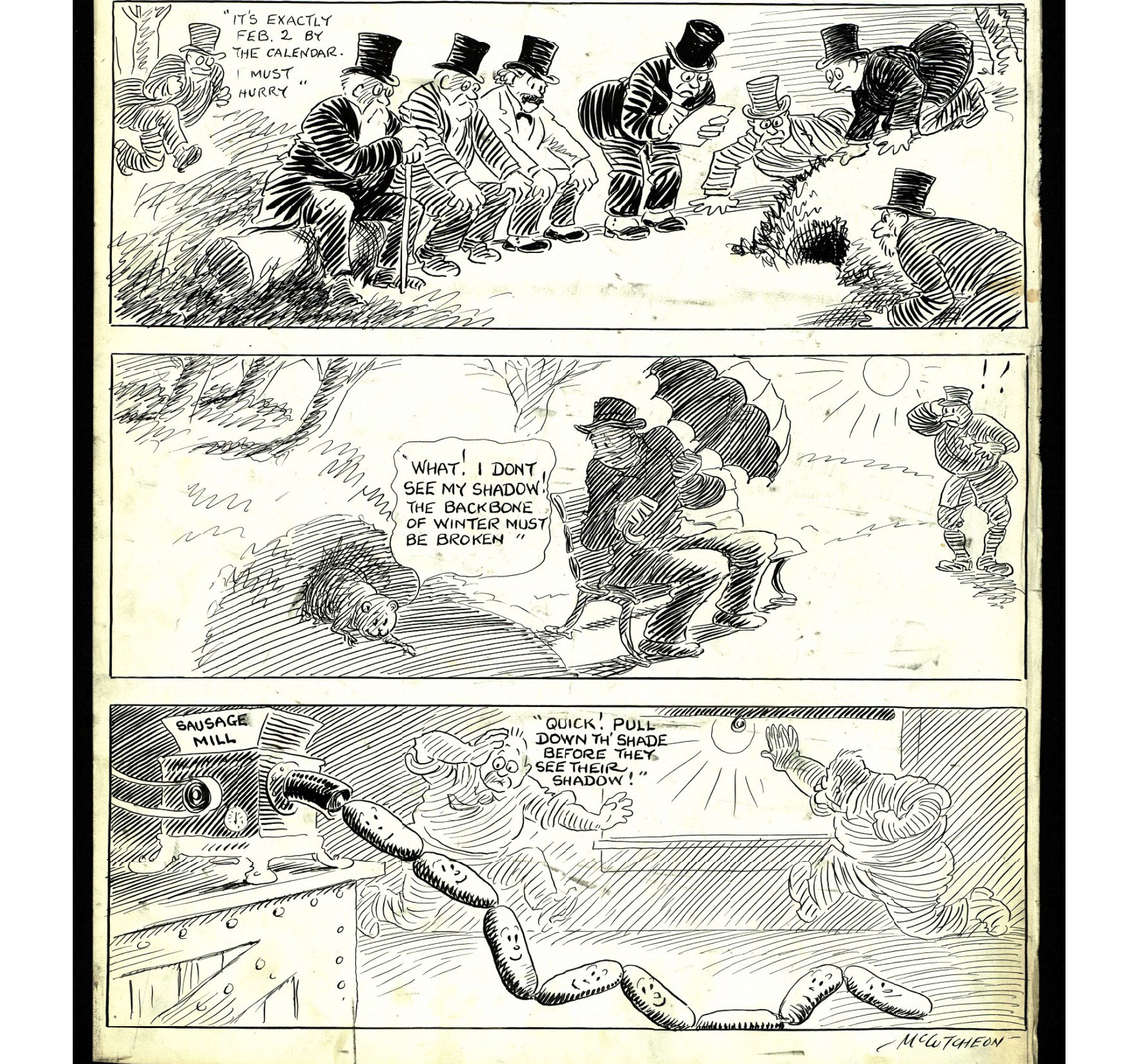 Published in the Chicago Tribune in 1931.

On January 31st, 1931 this untitled cartoon was published in the Chicago Tribune. The cartoon is three panels on the subject matter of Groundhog Day. In the first panel, men are gathered around a calendar that reads February 2nd and they are expressing the need to hurry. In the second panel, a man is holding an umbrella over a groundhog so that the groundhog will not see his shadow. The groundhog states that “The backbone of winter must be broken.” In the final panel, two employees at a sausage mill are rushing to pull the blinds down so that the sausages are not able to see their shadow. While the topic of Groundhog Day is significantly less important than other topics McCutcheon covers, it speaks to his great ability to create relevant cartoons that represent everyday life and activities.

Interestingly enough McCutcheon stressed the importance of making cartoons on current information. In McCutcheon's autobiography, he states, “Editorial cartoonists on the big American dailies try to draw their cartoons as near the hour of publication as possible.”[1] This cartoon was published just a few days before Groundhog Day and depicts the urgency to prepare for the holiday. While it seems, this cartoon is obviously pertaining to Groundhog Day, it can also be said that McCutcheon understood the desire for winter to end. A shorter winter is almost always more desirable, however, in the case of 1931, it was more important than before. A longer winter means less time for farmers to profit off of their crops. With many people unemployed during the Great Depression, a longer winter meant cold weather and the challenge of fighting hunger in addition to the elements. The mill workers not wanting the sausages to see their shadows are a funny inclusion that likely made people smile. It could also be acknowledging the idea that if the sausages see their shadows that they would go back in the mill and the food source would disappear. While less obvious, this cartoon is pertaining to the challenges of the Great Depression and the lack of stability that people feared. His ability to make a successfully published cartoon on a topic other than politics and economics shows that his work covered a large artistic range and that he was appreciated no matter the subject.