McCutcheon's Career Prior to the 30s 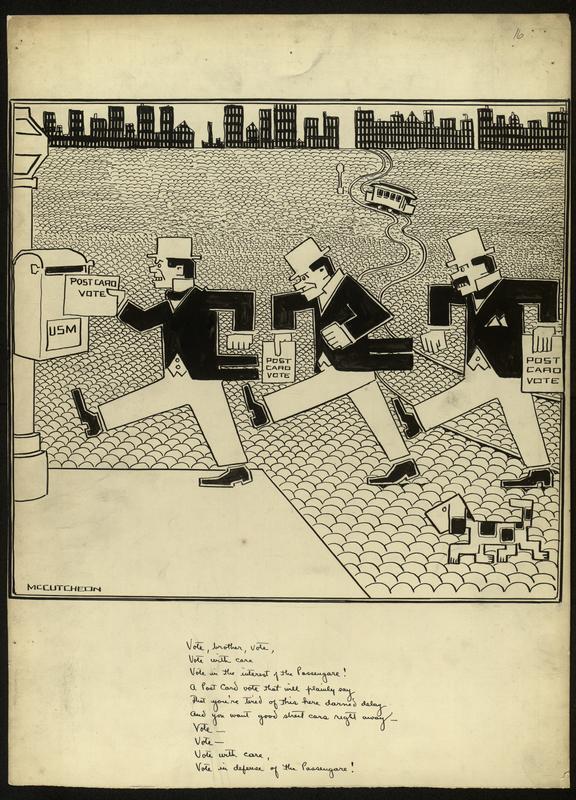 Pencil and ink on board

Title from the first line of poem written under cartoon.

Before his national success at the Chicago Tribune John McCutcheon created some of his most memorable works at the Chicago Record-Herald. Published in approximately 1896, “Vote, Brother, Vote” was a cartoon in support of William McKinley’s presidential campaign. McCutcheon often focused on cartoons that demonstrated politics, social issues, and daily life for Americans. However, this cartoon stuck out and is forever known as one of the few cartoons that attached the name of the artist to the work. To be a cartoonist in the late 1800s and early 1900s meant that you were responsible for creating a laugh, a relationship, or pointing out the urgency in a current events issue. Additionally, this job description did not come along until artists like McCutcheon created a standard for quality cartoons.

When referring to McCutcheon’s large fame, it is important to note his wealth as a result. It is unclear what McCutcheon’s salary would have been once he transferred from the Chicago Record-Herald to the Chicago Tribune, but it is clear that he made more than the average Chicagoan as he was able to afford a private island in the Bahamas in the year 1916. He and his wife referred to their home away from home as "Treasure Island" and made many memories on the beautiful island. Additionally, his island getaway became a popular location for other stars of the era which alludes to his fame. Amongst that list were people that belonged to “European royalty and American luminaries.”[1] It is clear that many political alliances and friendships were formed as a result of McCutcheon's wealth and high-profile life.

“Vote, Brother Vote” depicts three men marching toward a mailbox with their “postcard vote” in hand. In addition to the three men, there is a dog in the corner. The dog sparked nationwide curiosity and had everyone talking about the cartoonist McCutcheon calling him, “the fellow that draws the dog.”[2] Years later in his autobiography McCutcheon had much to say about his infamous dog stating, “About the middle of the campaign I had a cartoon ready for the paper which had some space left untouched in a lower corner. I might have put in a bush or a fence post, but without any purpose except to fill the space I finally drew a little dog--not a valuable one, just a harmless-looking little dog whose architectural lines were more friendly than good.” This is a great example of John McCutcheon and his desire to bring a smile to the face of each reader. The lighthearted addition of the friendly dog was helpful in lightening the intensity of a presidential election. McCutcheon’s dog was enough to kickstart his long and successful career. How can a newspaper cartoonist go up from here? McCutcheon was sure to find out.

← Introduction
Economics →
Prior to the 30s