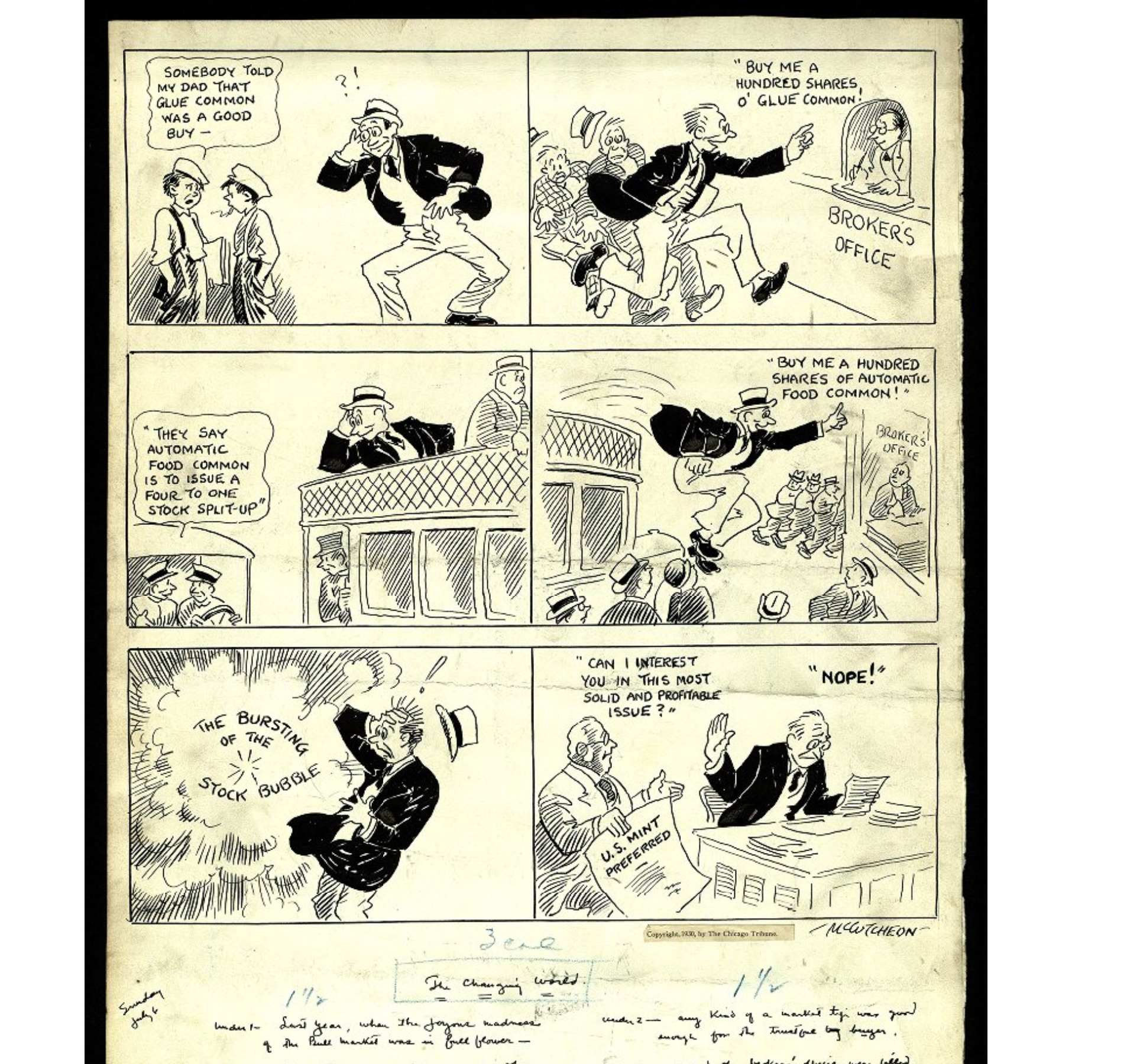 In the 1930s McCutcheon was focused on every aspect of American life. Why did John McCutcheon not just focus on politics? He was a man who prided himself on his ability to be more than a one-trick pony. Published in 1930, “The Changing World” depicts people in the first four panels rushing to buy all the stocks that they believed to be a great deal. The fifth panel shows a man being blown back by the “bursting of the stock bubble.” The last panel shows that man who had previously bought all the stocks to be no longer interested, even in the good deals. This cartoon is alluding to the change in the world and the way people interact with stocks and all things economics at the start of the Great Depression. Additionally, at the bottom of the comic McCutcheon’s handwritten captions are included. This comic in particular has a large handwritten portion that shows the viewer that McCutcheon was thoroughly engaged in the material he was constructing. In writing an extensive caption McCutcheon was able to explain everything to the Tribune employees as they had to transcribe the cartoon and transfer it into the newspapers to be sent to the masses. He was passionate about his work and hoped that people felt a sense of security in knowing that they were not alone during difficult times.

McCutcheon was able to create a comic that showed the change from pre–Great Depression to being in the heart of the devastation. The cartoon provides an example of the many ways that John McCutcheon was able to attract an audience. The cartoon was prominent to the times and many people were able to relate to the issue being presented in the cartoon. It is likely that viewers of the cartoon were able to put themselves in the position of the man starring in each panel. Many people lost their interest in investing after the stock market crash. Within this, McCutcheon represented the average American despite him being anything but average himself. By the 1930s, McCutcheon was a man of notoriety and wealth. He had friendships with many politicians and public figures which means he would have had insight into the government’s role in the events of the Great Depression. Despite his knowledge and personal experience of what the depression was like for high-class citizens, McCutcheon was able to depict the challenges of the everyday man. Additionally, he was able to speak through his cartoons and relay messages on a national level rather than to just the normal Chicagoan. While McCutcheon was economically secure during the Great Depression, he understood the urgency to communicate and let people know that they were not alone in these tough times.

← Prior to the 30s
American Holidays →
Economics