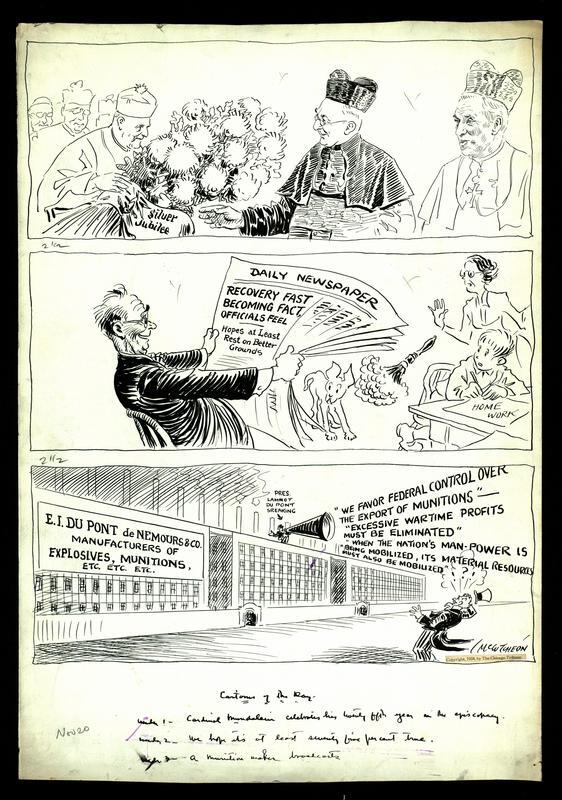 Published in the Chicago Tribune on November 20,1934.

This editorial cartoon, “Cartoons of the day” is comprised of three panels showing three different current events which are seemingly unrelated. In the first panel, Cardinal Mundelein is receiving flowers at his Silver Jubilee. According to the Chicago Tribune, the ceremony consisted of silver medals being given to distinguished prelates and guests in attendance of the celebration. This event brought many Cardinals and an influx of people to Chicago for the event. In the second panel, a man beams at a newspaper claiming economic recovery. Programs were being put in place as Roosevelt had recently entered office. The New Deal was providing hope for Americans and the federal government was becoming comfortable with their involvement in economic matters. People believed that things were looking up! In the third panel, DuPont explosives manufacturers are making an announcement that reads “We favor federal control over the export of munitions, excessive wartime profits must be eliminated. When the Nation’s manpower is being mobilized, its material resources must also be mobilized.” In 1934, a Senate Munitions Investigating Committee examined criminal, war profiteering practices of weapon companies during WWI. This cartoon is bringing light to the weapons industry being “merchants of death” and showing the American people that the munition people were only concerned with their own profits.

Interestingly enough these three panels show dramatically different events. The first is addressing more local news and explaining the flow of Cardinals and press to the Chicago area. Additionally, the second panel is addressing economics. Considering the time frame it makes sense that McCutcheon is often focused on economics and events in relation to the Great Depression. The cartoon in the panel pertaining to economics is directed at the average American. It is meant to provide hope that the hardships could be on their way out. America is figuring out how to cope with the massive issue that is economic uncertainty. Lastly, the third panel addresses the weapons industry. This is something that would likely have been of less interest to the average reader. However, in pairing this cartoon with two other cartoons of high relevancy, people were likely to concern themselves with the issue. The third panel addresses both National and Global issues pertaining to the weapons industry and WWI. McCutcheon was strategic in the cartoons that he paired together as it seems he reached several audiences in one editorial cartoon.