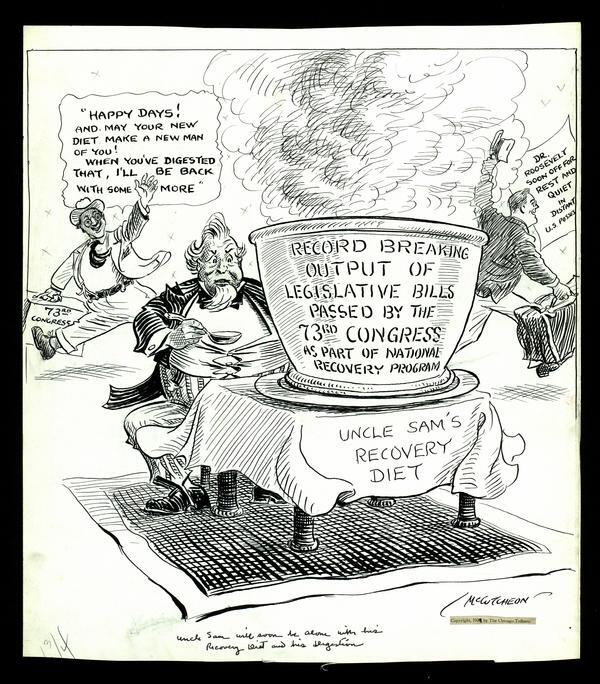 Published in the Chicago Tribune 1934.

“Uncle Sam will soon be alone with his recovery diet and digestion” published in 1935, is McCutcheon’s response to the large output of legislation by the 73rd Congress. The cartoon depicts a man who represents the 73rd Congress stating “Happy Days! And may your new diet make a new man of you! When you’ve digested that, I’ll be back with some more.” The 73rd Congress is talking to Uncle Sam who appears overweight and to is eating from the bowl titled “record breaking output of Legislative bills passed by the 73rd congress as part of the National Recovery Program.” Additionally, the weight on Uncle Sam is representative of the ways in which the Government and people in power were not starving as a result of the Great Depression. This very well could be a dramatization of inequality during the end of the Great Depression. Moving on, Uncle Sam continues to eat his “recovery diet” as “Dr. Roosevelt is soon off for rest and quiet in a distant U.S. Possessions.” This cartoon is referring to the United States National Recovery Administration Program that was put in place by President Roosevelt and the 73rd Congress. The goal of the program was to stimulate business recovery through fair-practice codes during the Great Depression. Uncle Sam was overwhelmed and panicked by the amount of food being presented to him, similarly to how the people of the United States were overwhelmed with the number of administrative programs and promises in the midst of reform. The uncertainty in Uncle Sam’s face is representative of the uncertainty of the American people in the federal government at the time. All while Dr. Roosevelt is at rest and leaving Uncle Sam to process the legislation.

McCutcheon made a cartoon focusing on the National Recovery Program and the way in which Americans might have felt overwhelmed with the many legislative bills being passed. Prior to the release of this cartoon, McCutcheon had made quite a few cartoons focusing on the economic impact the Great Depression had on American citizens. Now, he is approaching the end of the event and the way in which America is attempting to recover. This cartoon would have reached a large crowd and would have likely made readers interested in the legislative bills being passed. Additionally, the aspect including “Dr. Roosevelt” shows that McCutcheon had political interest and was not shying away from the President’s involvement in the topic. In the past, McCutcheon had shown support for the Republican Party. However, he attempted to remain neutral most times and portray comics from both perspectives. In his autobiography, he expressed his desire to include portions in his political cartoons that are free of political affiliation. Were average American citizens interested in this topic prior to McCutcheon’s cartoon? Or was he yet again responsible for bringing light to a topic that many were dismissing?