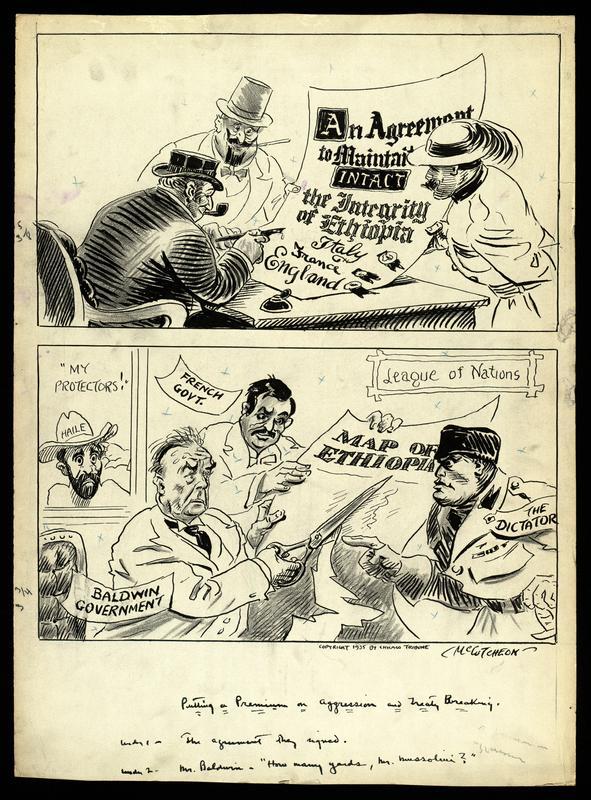 In 1935 at the time of this cartoon's publishing, the Empire of Ethiopia was facing an international crisis that also involved the Kingdom of Italy.[1] The two countries pursued a policy of provocation against each other. After this the League of Nations, as pictured in the first panel of the cartoon, are signing “An agreement to maintain intact the integrity of Ethiopia.” In the second panel, however, we see France, Italy, and England cutting up a map of Ethiopia. After Italy invaded Ethiopia, the empire demanded that the League of Nations protect them against Italy. Ultimately the League of Nations failed to protect Ethiopia as they did not wish to designate an aggressor.[2] In the second panel, Haile Selassie, emperor of Ethiopia, is watching the League cut up the map as he exclaims, “My protectors!”

This cartoon is McCutcheon’s way of addressing the broken treaty and the events of Italian aggression toward Ethiopia. While the Italo-Ethiopian War seems like an issue that had no effect on the United States, it was largely important in the grand scheme of World War II. In response to the Ethiopian appeal, the League of Nations condemned the Italian invasion and imposed economic sanctions on Italy. However, the sanctions were ineffective because they lacked support. Ultimately, by giving substance to Italian imperialism claims the tensions between fascists states and Western democracies only grew.[3] McCutcheon focused on the failure of the League of Nations and what happened when their decisions were not supported by the great powers. McCutcheon had the right idea to focus on this international issue of treaty breaking as it demonstrated to Americans what the League of Nations was truly about.