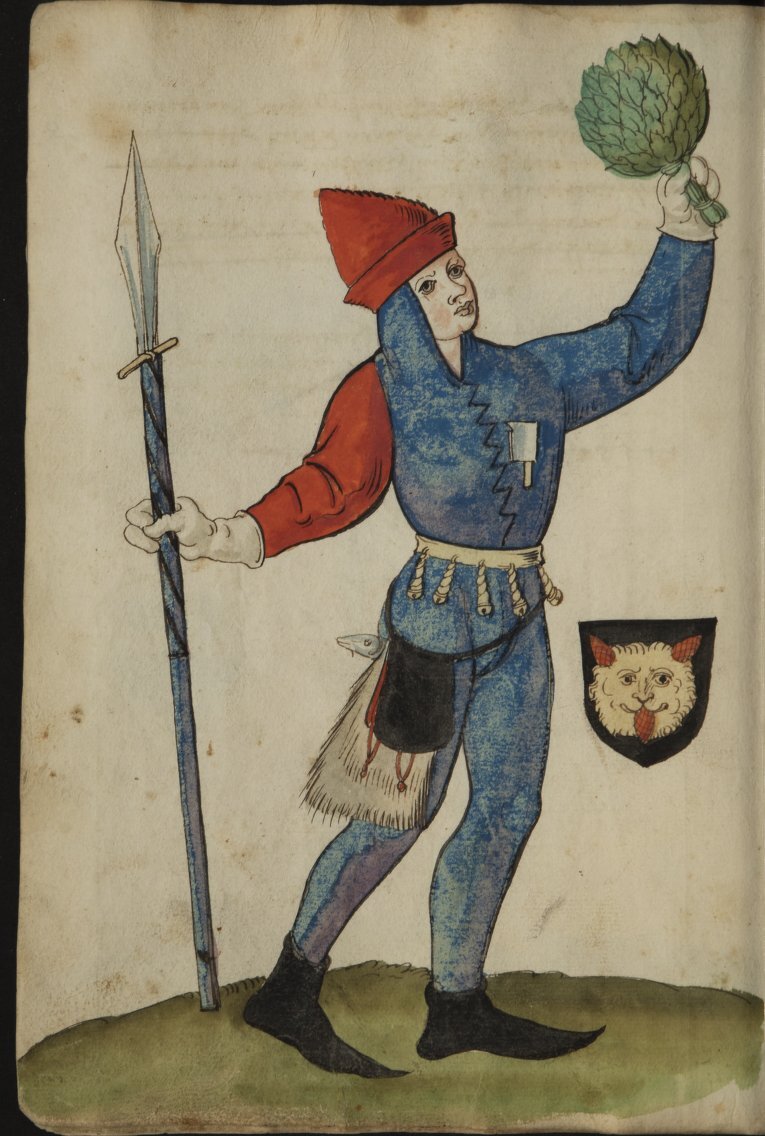 A Läufer in 1456. Note the fish sticking out of his sack, and the butcher's knife on his chest.

At some point, the butchers of Nuremberg were granted the right and obligation to perform a dance on Shrove Tuesday as part of the Carnival festivities. Medieval chroniclers asserted that this was a reward bestowed upon the butchers for abstaining from the failed artisans’ uprising in 1349. This story seems unlikely, however: other towns granted their butchers similar privileges even without artisans’ revolts.

The butchers’ dance was accompanied by a masked honor guard, the so-called Schembartlauf. The Läufer were dressed in finery provided by the butchers. They ensured that the streets were cleared before the dancing butchers and also collected fish and crabs, which were eaten by the dancers afterwards.

The Schembartlauf is first documented in 1449, though it is possible that some form of protection and street control for the butchers’ dance existed beforehand. 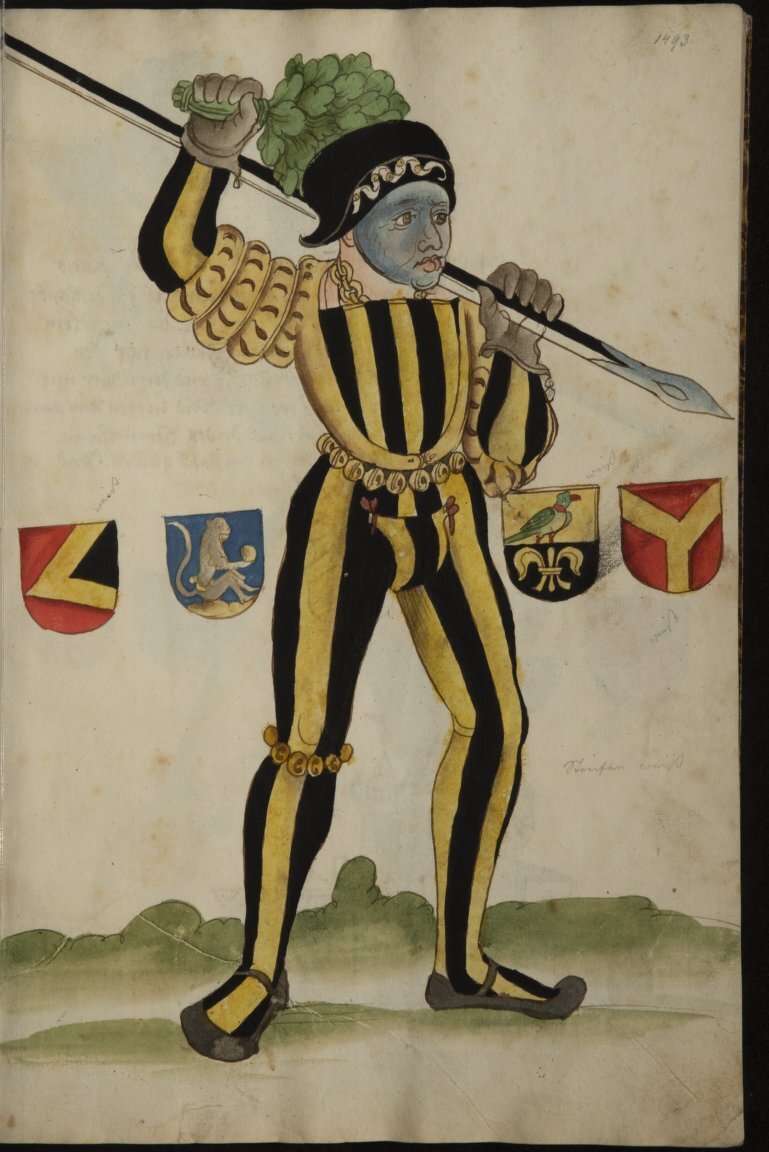 A Läufer in 1491. The coats of arms include the families Haller, Ketzel, and Paumgartner.

Over time, the Schembartlauf became increasingly independent of the butchers’ dance and more of a spectacle in its own right. While the first Schembartlauf had been comparatively modest with only twenty-four Läufer, it gradually grew so that in 1539, there were 150 participants.

In 1468, the butchers stopped paying the Läufer. Instead, the Läufer paid for the privilege of accompanying the butchers. This meant that although the first parades had been egalitarian with equal numbers of commoners and patricians, the parade became increasingly the province of the patricians. Since the butchers no longer had to foot the bill, the paraders’ costumes could also become more and more elaborate. 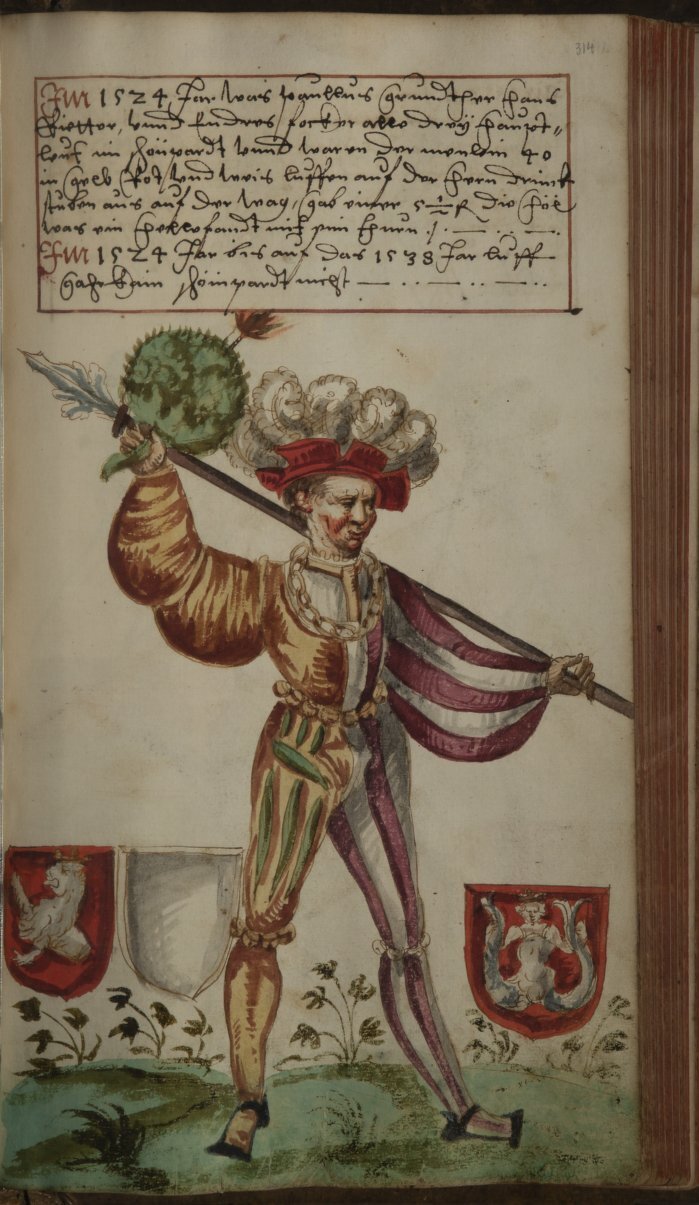 A Läufer in 1524. The coats of arms include the families Grundherr and Rietter.

The Schembartlauf occupied pride of place within the Carnival festivities. Other parades were periodically permitted by the city council and sometimes the parade of Läufer was accompanied by other costumed figures ranging from wild men to capering fools, but the Schembartlauf was special. Only the Läufer and the butchers were allowed to wear masks. This right was zealously defended, sometimes violently.

The Läufer were led by specially designated “captains,” who also kept order within the Schembartlauf, sometimes less successfully than one might have hoped. The captains for each year were called out by name in the later manuscripts documenting the parade. They were usually patricians, especially as the years went on and the Schembartlauf became ever more extravagant.