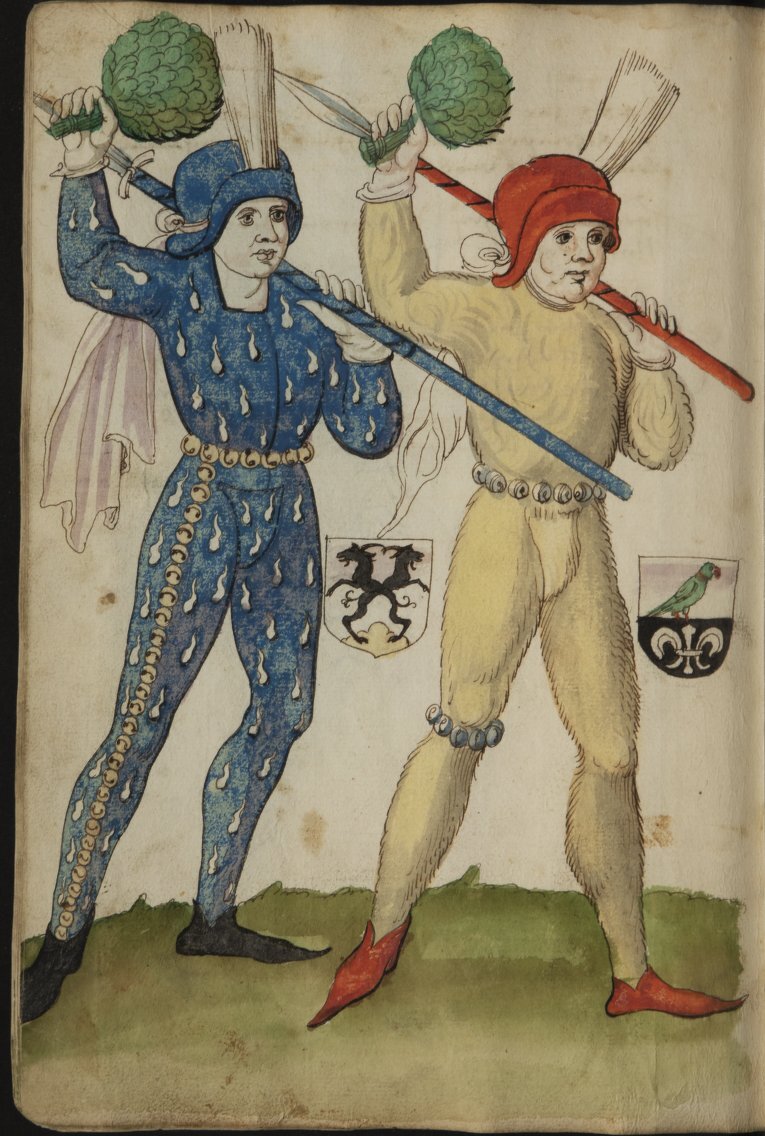 Two Läufer in 1463. The coats of arms are of the families Halpwachs and Paumgartner.

All Läufer wore the eponymous Schembart masks, which were designed to appear clean-shaven and youthful in appearance. Their costumes were based on contemporary fashions, especially the martial look of the Landsknechte, mercenary infantrymen prevalent at the time.

Landsknechte often wore clothing with slashed sleeves and hose. They were also known for wearing parti-colored clothing that was one color on the left and another on the right. While parti-colored clothing today is associated mainly with jesters or fools, originally it was a mark of station: it indicated that a person was freeborn and thus entitled to brighter clothing.

These styles were adopted as part of the attire of the Läufer, along with soft pointed shoes and strings of bells that could be worn tied around the knee or around the waist.

The costumes were intended to show off the virility of the Läufer. They were tight-fitting and often quite revealing. On more than one occasion the city council had to step in to forbid Läufer from exposing their genitalia during the parade. 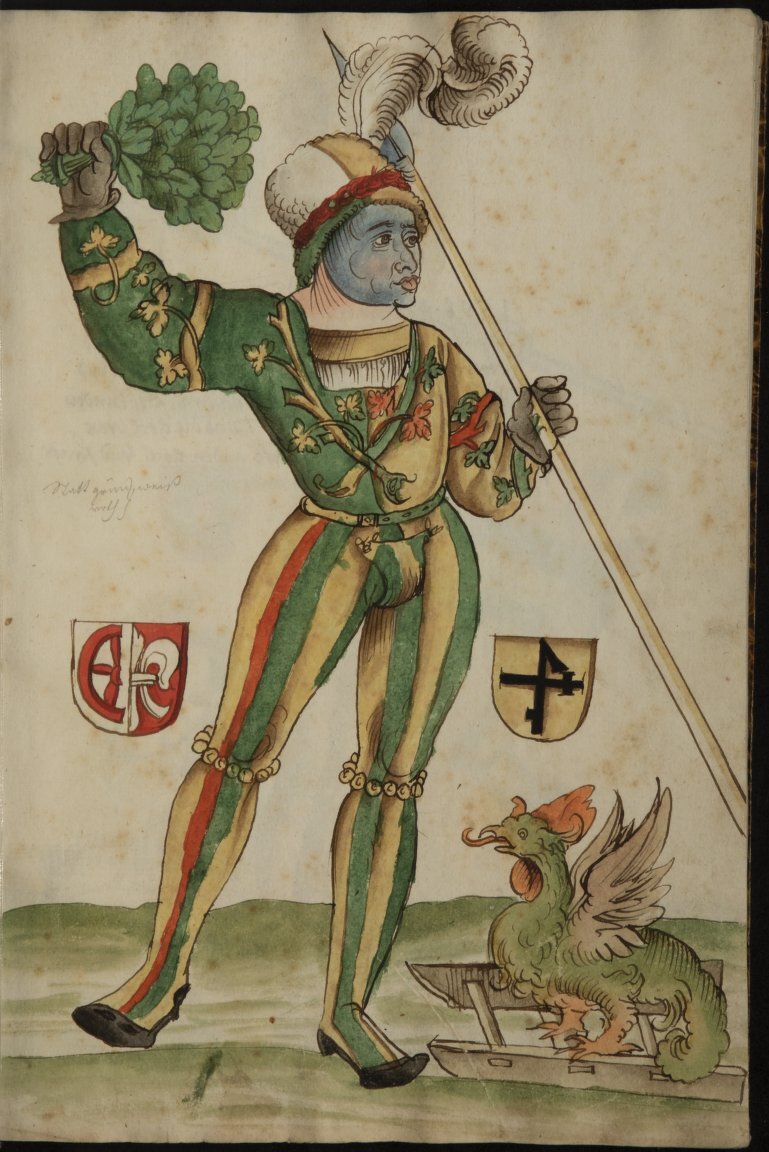 A Läufer in 1507. The coats of arms are of the families Fürer and Strobel. In the background, you can see the Hölle for that year, a basilisk.

In addition to remaining in tune with contemporary fashions, the costumes also incorporated allegorical symbols. Sometimes they were plain symbols like flames or flowers, which were repeated on one or both sides of the costume. On other occasions, they were an image of the Virgin or an axe, in which case it typically appeared on the Läufer’s chest.

Some Läufer carried axes to represent their affiliation with the butchers. Similarly, many carried wooden spears, both to help guard the butchers and to echo the pikes of the Landsknechte.

Läufer also often shot off fireworks out of handheld launchers. For aesthetic purposes, the launchers were shaped like bundles of branches and leaves. In the manuscripts, they often look like artichokes to a modern eye. 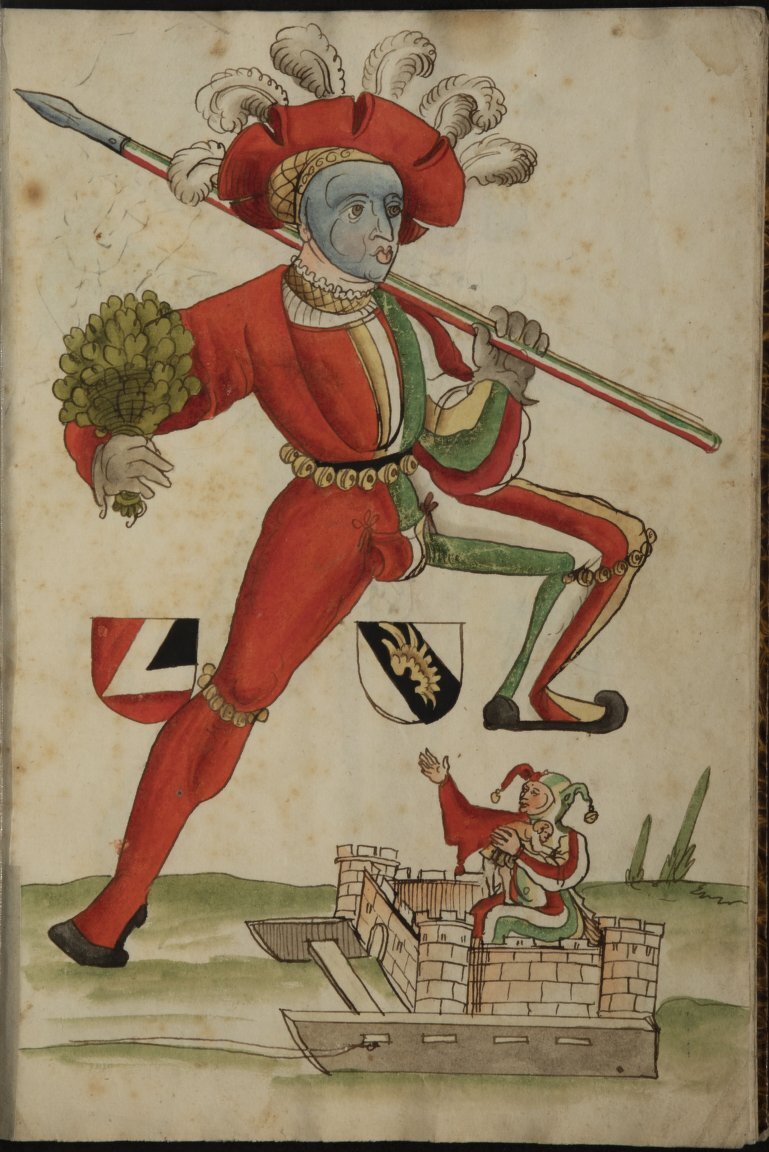 A Läufer in 1524. The coats of arms are of the families Haller and Engel. In the background, you can see the Hölle for that year, a fool with a child.

Between the sumptuousness of the Läufer’s costumes and their fireworks, to say nothing of other participants in the parade, the Schembartlauf must have been a massive spectacle.

Occasionally other groups would join in with their own costumed parades, though the Läufer did not share the spotlight willingly. In 1507, a group of sixty wealthy merchants dressed up as masked Turks in an opulent parade. After a brief strategic planning session, the Läufer responded with military tactics. They attacked their competitors and drove them off.

The so-called Schembartkrieg or Schembartscharmützel (Schembart war or Schembart skirmish) resulted in a premature end of the Schembartlauf that year. Given that the Läufer were technically correct in having the sole privilege of holding a masked parade, their punishment was limited to a sharp reprimand.