Apologetics are a form of theological writing that seeks to defend or justify religious faith in rational terms. In providing logic-based arguments rather than relying solely on scriptural evidence, apologetic writers sought to harness rhetoric in the service of religion. The staying power of apologetic works is impressive: Eusebius's arguments were over 1,000 years old by the time that the editions of his arguments included here were reprinted.

Special Collections holds three incunable apologetics, all printed in northern Italy. Two of them were written by Eusebius of Caesarea, an early Palestinian bishop living at the time of the Arian controversy. Eusebius was an extremely prolific apologist, historian, and exegete, though the clarity of his thought has sometimes been criticized. Though not an Arian himself, Eusebius got into trouble attempting to protect the Libyan heretic Arius but was exonerated at the Council of Nicea (325 CE). The third apologetic was written by the Dominican friar Thomas Aquinas, one of the great Catholic theologians of the Middle Ages. Aquinas pushed for the incorporation of Aristotelian philosophy into theology and was himself a prolific annotator of Aristotle's works, which were becoming more widely available at the time.

The apologetics held by Special Collections are fascinating on a number of levels, but particularly as books that were purchased with use in mind: all three have been annotated by their owners.  Eusebius wrote De evangelica praeparatione in the early 4th century CE and Aquinas' Summa contra Gentiles is from the mid-13th century, but both were sufficiently in demand in the late 15th century to warrant republication and attentive reading. Are there any works or kinds of works are relevant today with a similar time-gap? 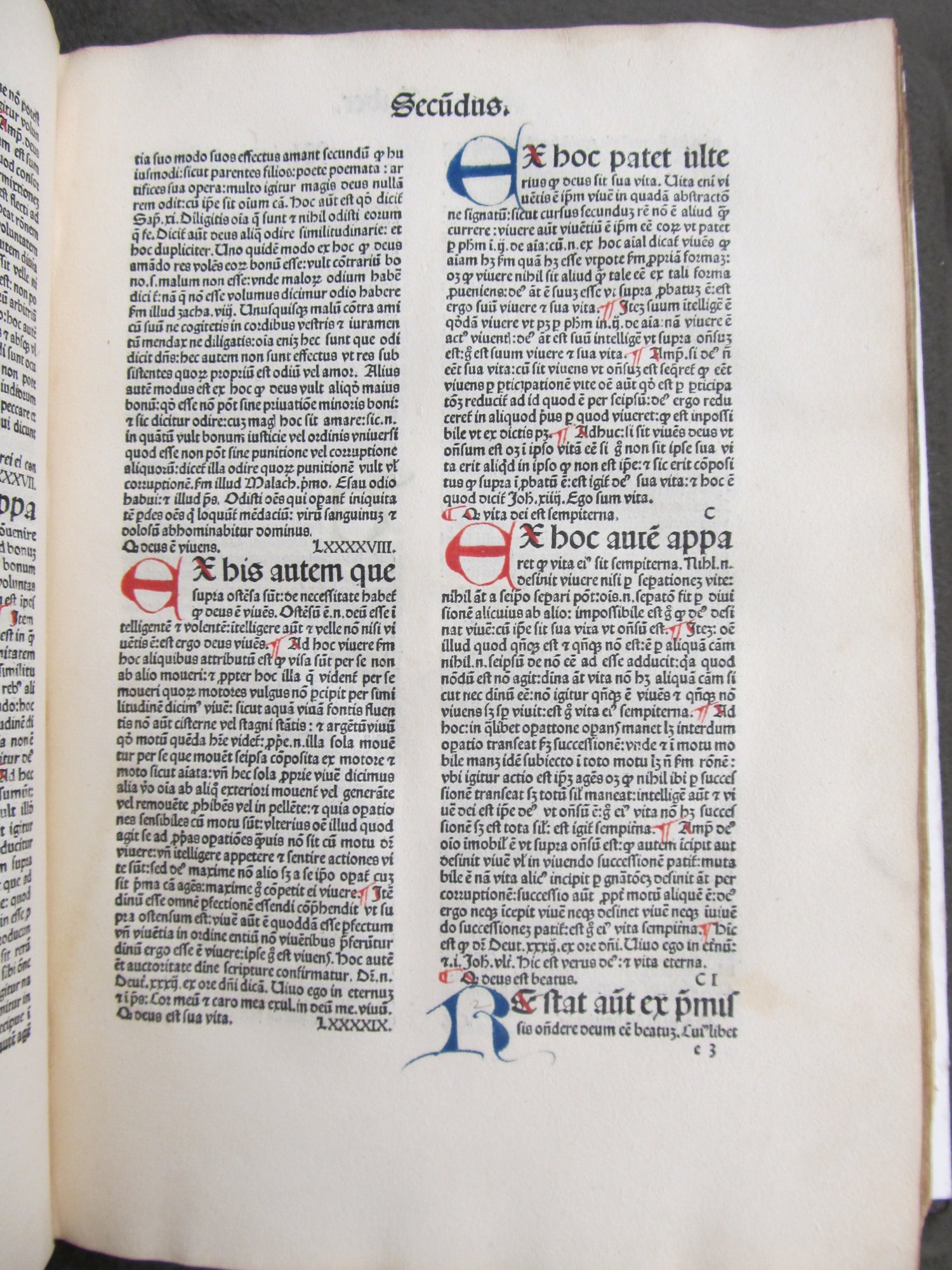 The Summa contra Gentiles was written to explain Christian doctrine to unbelievers, potentially partially motivated by the increasing contact with the Middle East that had begun towards the end of the 11th century with the Crusades. It demonstrates Aquinas's Aristotelianism and his desire to reconcile Greek philosophy with Christian theology. Unlike his mammoth Summa Theologica, the Summa contra Gentiles is not aimed at theology students and as such is sometimes more explicit in stating articles of the Christian faith.

Special Collections' copy of Aquinas's book has been thoroughly rubricated in red and blue. Its endleaves have been removed, exposing the interior of the covers so that the boards and sewing supports can be seen. The papers of the book show numerous different watermarks, which may be an indication that the printer was drawing on paper acquired for other projects in order to complete this one.

Nicholas Jenson is one of the giants of early printing. A French engraver, he traveled to Mainz in 1458 to learn about printing and settled in Venice in 1470. He was a master type-cutter and his roman type is justly famous. This would have been one of the last books he printed, as he died in 1480. Another book from his press held by Special Collections is an incunable edition of Plutarch's Lives. 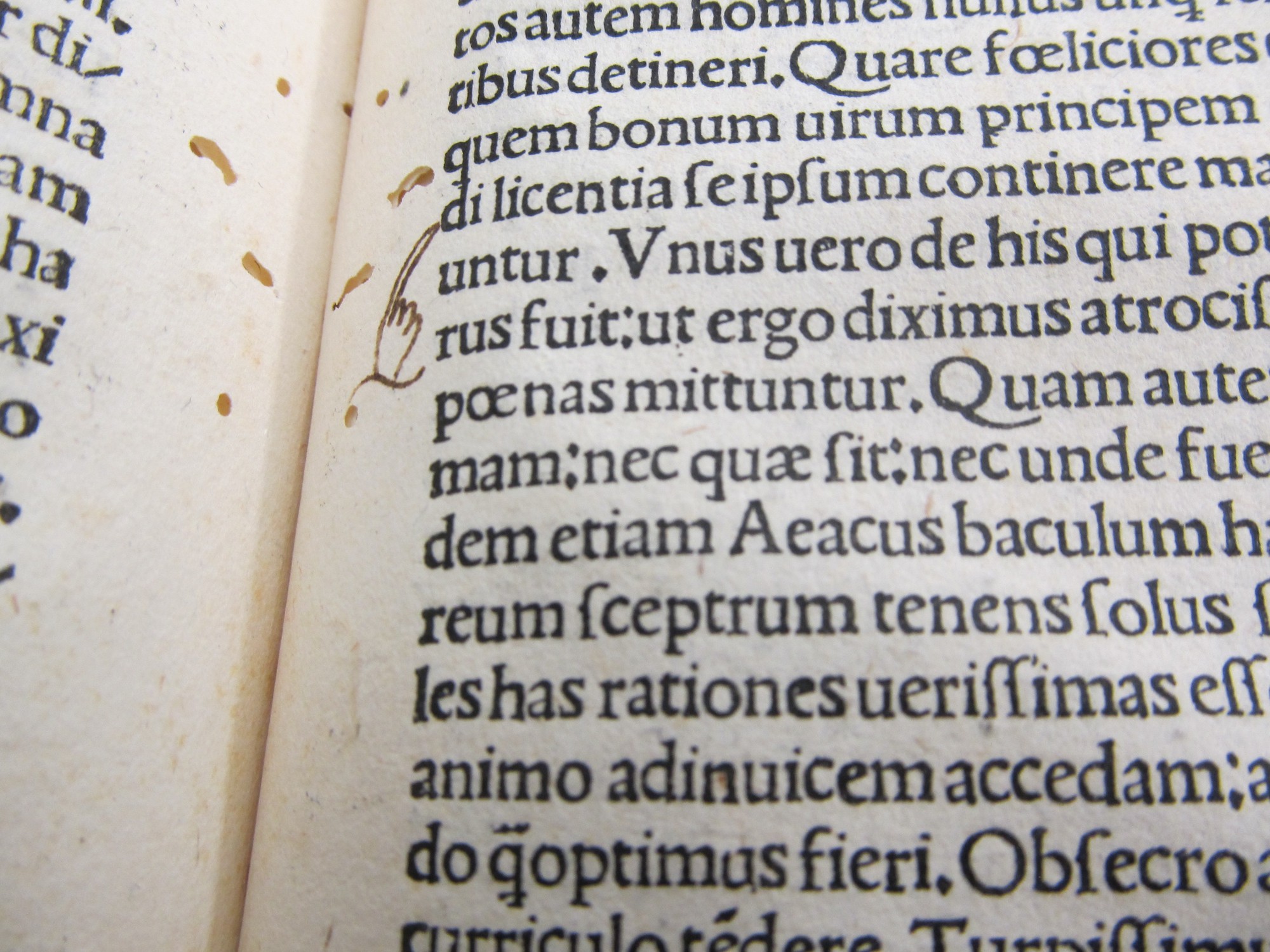 This book is a collection of Christian apologetics attempting to prove the excellence of Christianity over pagan religions and philosophies; a 1497 edition of the work printed by Bernardinus Benalius in Venice is also held by Special Collections.

Special Collections' copy has been attacked by literal bookworms, who have munched on its paper. A more metaphorical bookworm also seems to have enjoyed the book: it has been heavily annotated with notes in the margins. There is even a manicule on leaf N1.

Michael Manzolo was the second printer to operate in Treviso and was responsible for printing the Arte del Abaco, the first printed book on arithmetic. 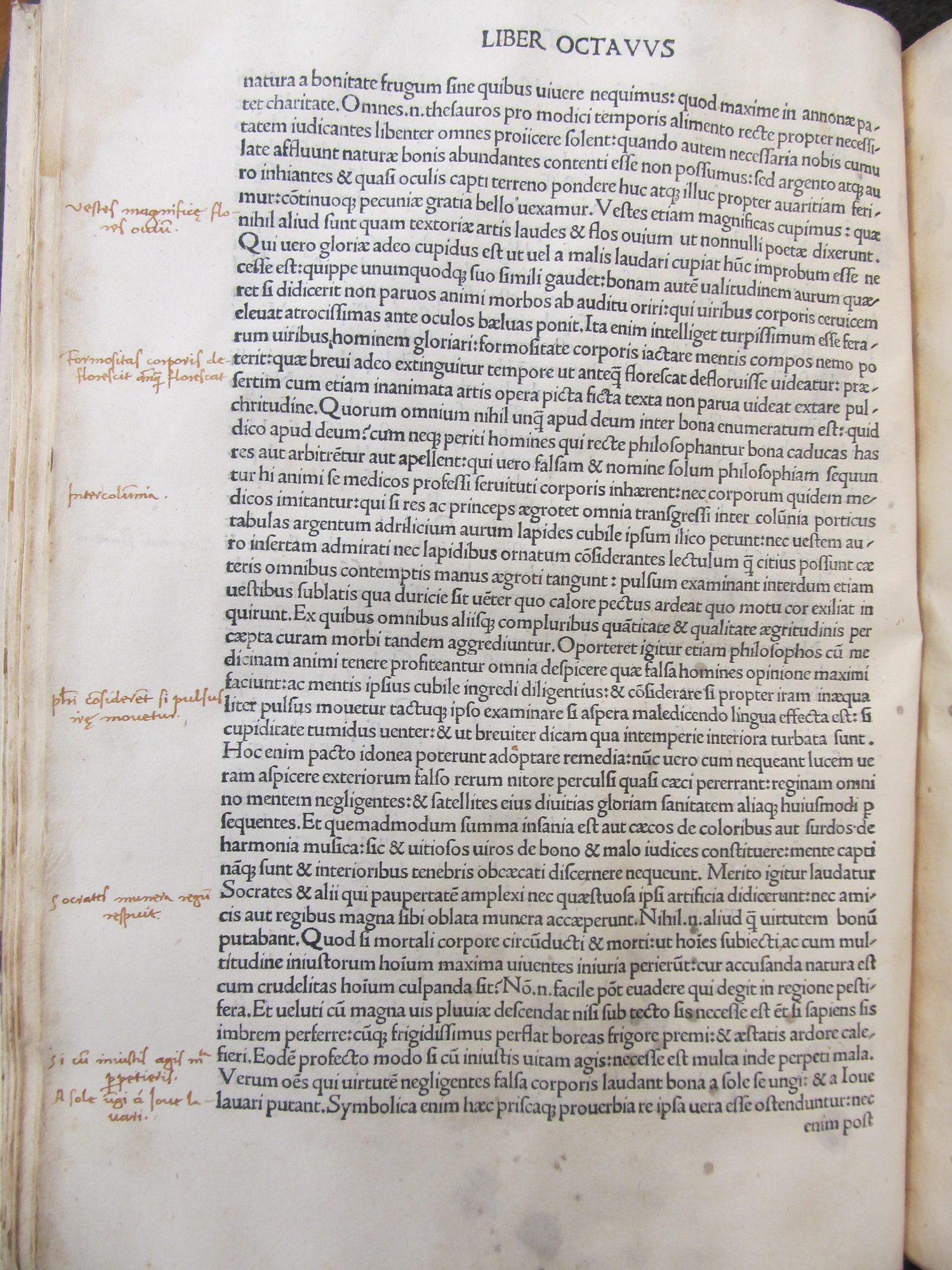 This book is a collection of Christian apologetics attempting to prove the excellence of Christianity over pagan religions and philosophies; a 1480 edition of the work printed in Treviso by Michael Manzolo is also held by Special Collections.

It also showcases a lot of the damage that a book may be forced to endure over the centuries: stains from mold and water damage abound throughout it.