Although the influence of the Catholic Church in medieval society is easily overstated, its importance for early printing was immense. Members of the Church acted as benefactors, editors, authors, translators, printers, and (of course) readers and collectors. Perhaps 42% of all incunable books were religious in nature. Theology alone made up 10% and liturgies nearly 9% of all publishing in the period. There was a market for religious books and early printers delivered.

Some 58% of Special Collections' incunable codices are religious in subject matter. In addition to Bibles, apologetics, and sermons, Special Collections also holds a variety of other books related to Christian religion, including a bibliography of religious writers, an annotated collection of liturgical hymns, an anti-clerical tract, a treatise on vice and immorality, and a pair of leaves taken from a Book of Hours. Their authors range similarly widely, from a book-collecting abbot to an irascible French lawyer, but they are united by an awareness of the Church as omnipresent in society.

The Catholic Church served as a focal point for much of the debate and thought in the medieval period. Even if you were against it, you could not help but be aware of it. Are there similar institutions or entities that occupy a similarly important place in today's society (and today's publishing)? 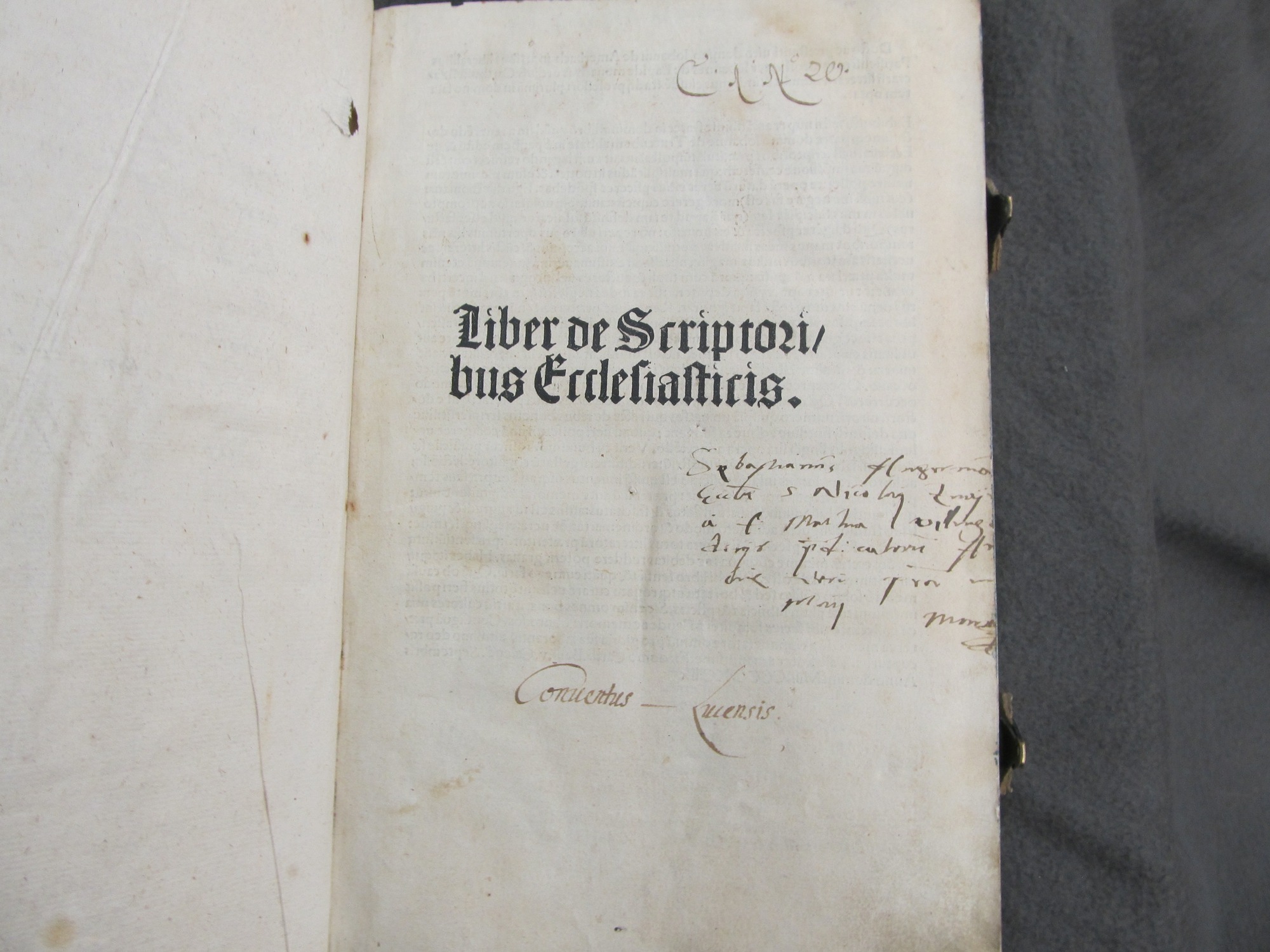 Johannes Trithemius, abbot of Sponheim, is perhaps most famous for his 1492 essay De laude scriptoribus (In praise of scribes) in which he dismissed the accomplishments of the printing press and expressed a preference for scribes writing on parchment. During his time as abbot, Trithemius expanded his abbey's library from 48 books to 2,000, which may have contributed to his impulse to write this book, which is a catalogue of almost 1,000 writers in chronological order with a listing of their works, some 7,000 items in all. It was the first specialized bibliography.

The book mainly includes ecclesiastic writers but also lists secular authors like the Italian poet Dante (folio 79 verso) and the German satirist Sebastian Brant (folio 134 verso). Trithemius could not resist including himself at the end of the book on folio 139, where he notes his authorship of De laude scriptoribus. Special Collections' copy has several ownership marks, including a pictorial bookplate and shelfmarks.

Amerbach also printed an edition of Francesco Filelfo's letters, which is held in Special Collections. 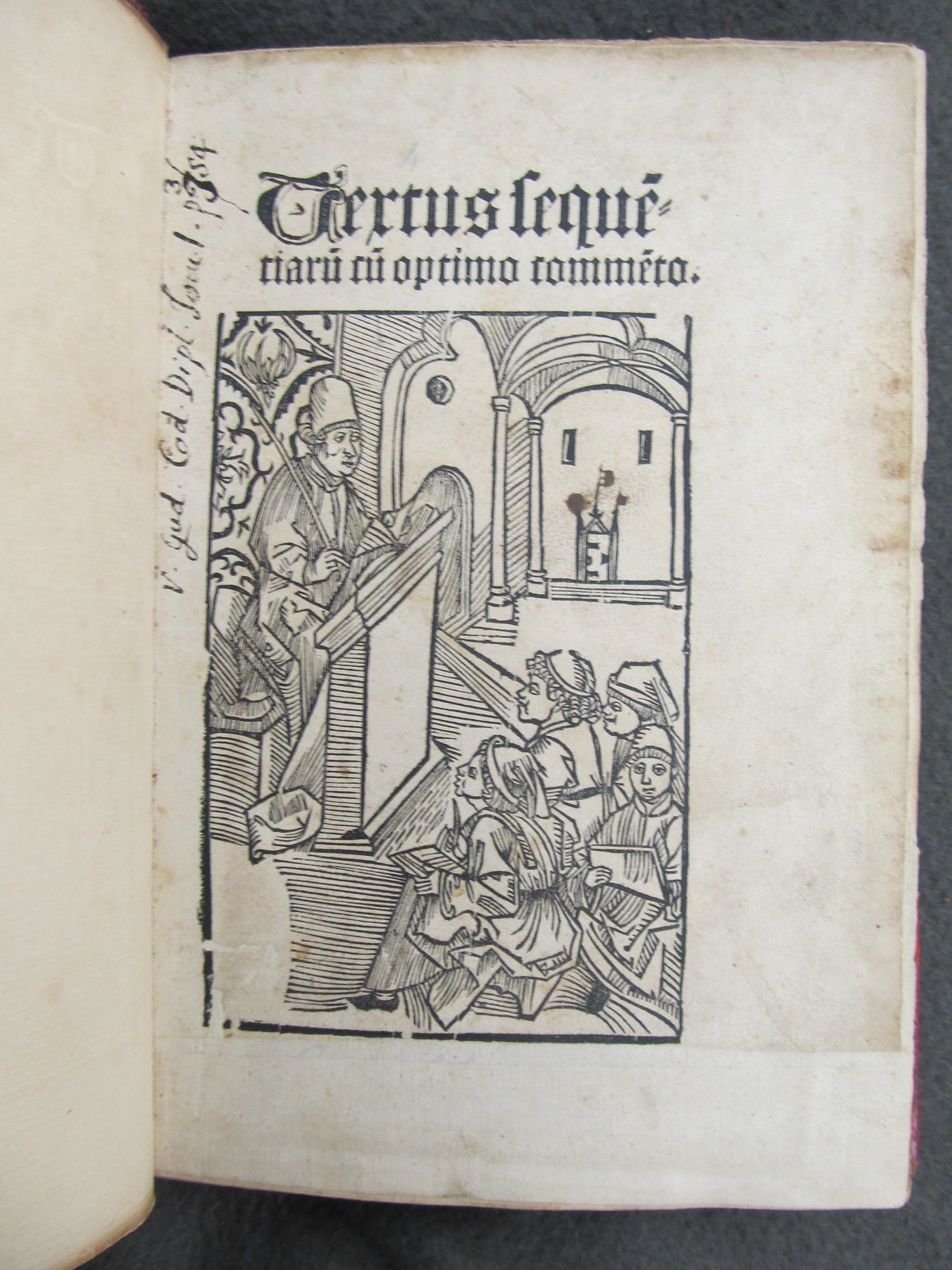 Special Collections' copy of this book would likely have delighted van der Beke, as it features numerous contemporary annotations. It also bears the somewhat  ominous-looking bookplate of Glenmore Whitney Davis, a journalist for The New York Globe, a daily newspaper published until 1923: Whitney's bookplate features a bearded face on a green background with completely blank, staring green eyes.

Heinrich Quentell was the most prolific incunable printer of Cologne, producing scholastic texts, humanistic works, schoolbooks, and liturgy. He printed the first Low German Bible at some point between 1478 and 1480; woodcuts from Quentell's Bible would eventually find their way into a Bible printed by Anton Koberger in Nuremberg in 1483. Special Collections' copy of De muliere forti is also from Quentell's press. 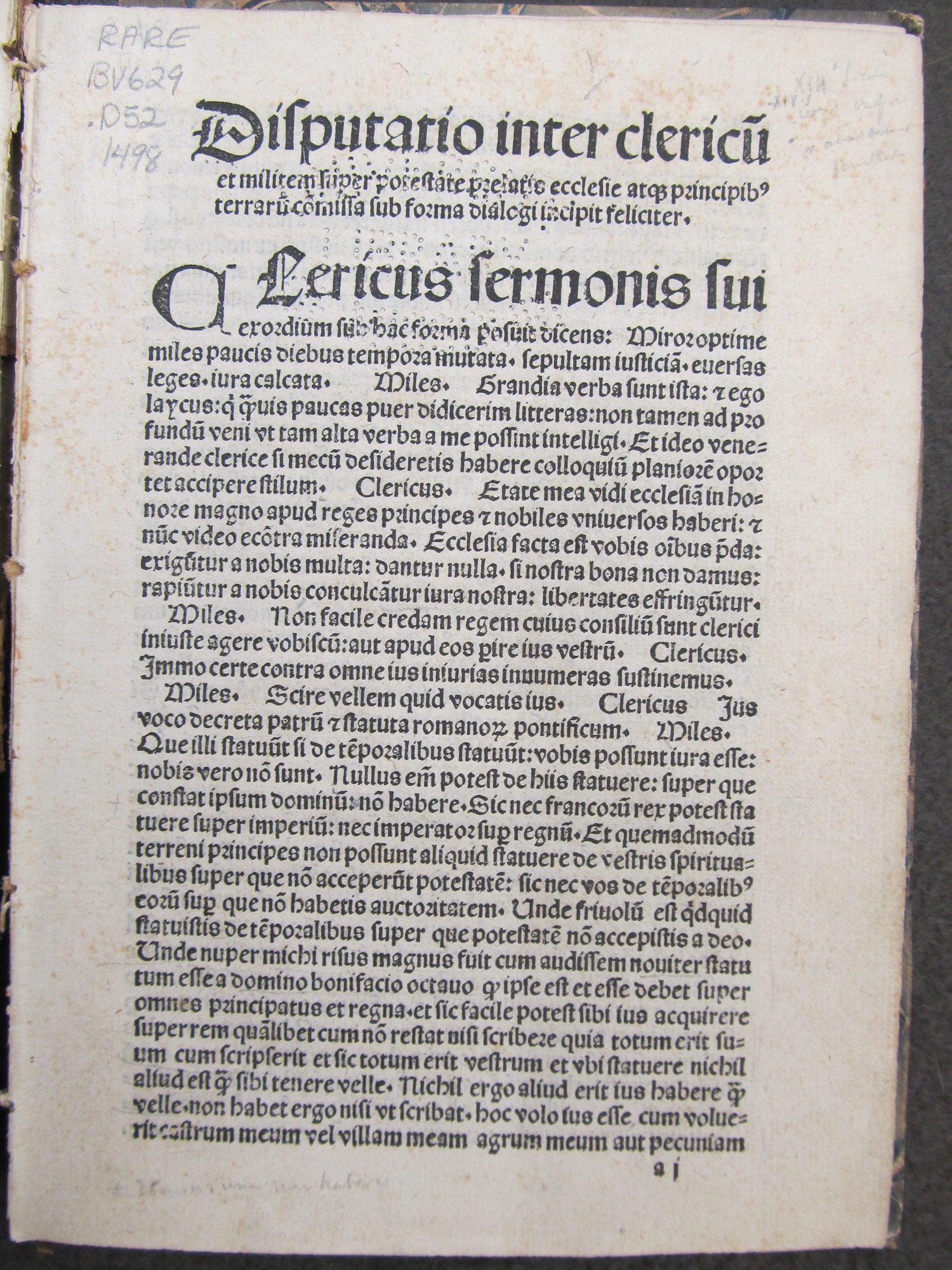 This book has the distinction of being the only anti-clerical incunable tract in Special Collections. It comes from France under the rule of Philip IV, known for his clashes with the English, the Flemish, and Pope Boniface VIII. Philip IV's chancellor, Pierre Flotte, is said to have responded to the papal claim of temporal authority (based on Luke 22:38), with the curt response, "Yes, holy father, but our swords are real."

A similar mindset appears to have motivated the author of this tract, which was most likely written by Pierre Dubois. Dubois was a Norman lawyer and political pamphleteer. He was chauvinistic, anticlerical, and clearly conversant with Aristotelian philosophy from his time at the University of Paris. Although not a part of the royal court, he wrote numerous pamphlets arguing against the authority of the Church and emphasizing royal authority, ideally culminating in French supremacy over western Europe.

Special Collections has held this copy for over one hundred years, acquiring it with the rest of Jacques Flach's collection. Jacques Flach was a law professor in the 19th century and had wide-ranging interests, including Irish history, Russian culture, ancient Mesopotamia, and French feudalism. 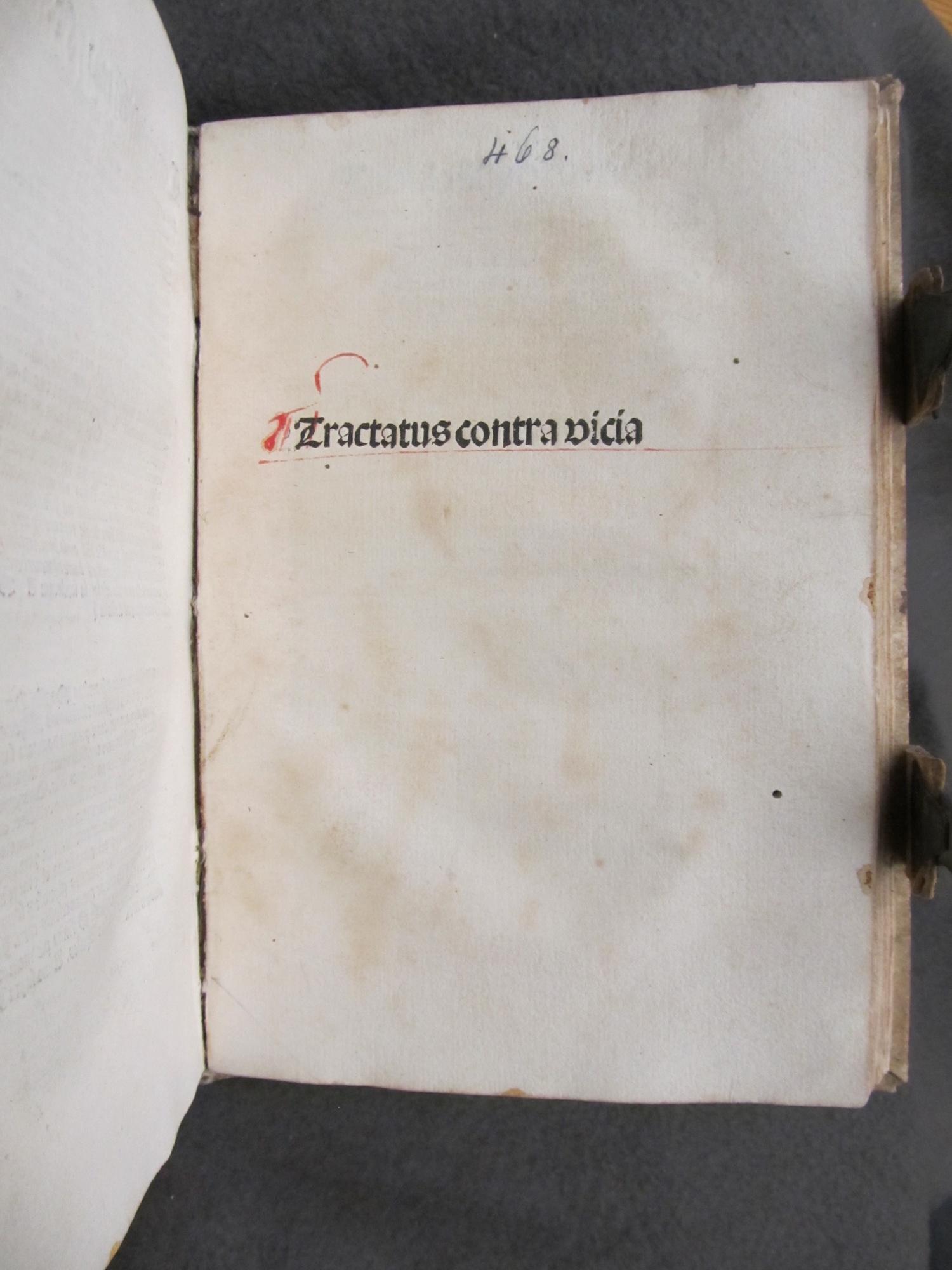 The Tractatus contra vicia is a treatise on vice and immorality, written by an anonymous author and published by Georg Husner. Husner was a printer operating in Strassburg, printing the majority of his 64 known publications anonymously. This was one of only four books to feature his name.

Special Collections' book is part of a Sammelband, having been bound together with two other religious texts. It is in a classic late-medieval German binding: blind-stamped pigskin over wooden boards. Interestingly, the Tractatus contra vicia is the only text in the Sammelband to feature annotations, suggesting that it was the work of greatest interest to the owner. 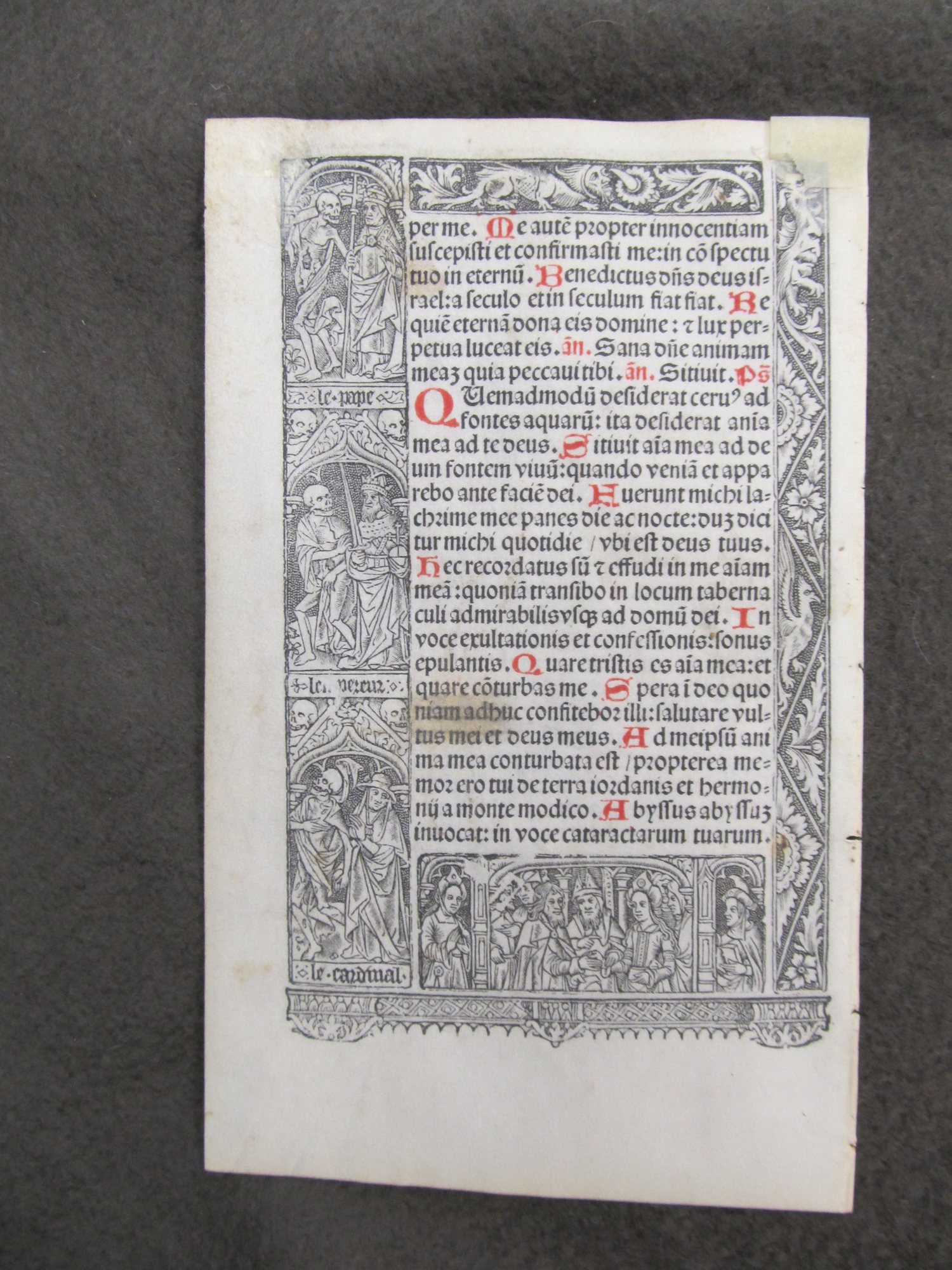 Books of hours were a special kind of prayerbook that began to appear in the 13th century. They were called "books of hours" because they included the prayers meant to be said at different times in the day, week, month, and year. They were meant for lay people rather than the clergy specifically and could be customized to match local practices: this one is prepared according to the use of Sarum (Salisbury), which was initially promulgated by the 11th-century bishop St. Osmund and was the preferred rite in England until the Reformation.

Special Collections holds two incunable leaves from a Book of Hours. The text of the first leaf includes Psalms 40:2-14 and Psalms 41:2-8; the second leaf presents Psalms 5:2-13 and Psalms 6. The two leaves are masterpieces of printing, done in red and black on vellum with beautiful metalcut illustrations along the sides of the page. Vellum printing was uncommon — paper took the ink far better — but was sometimes done as a luxury product.