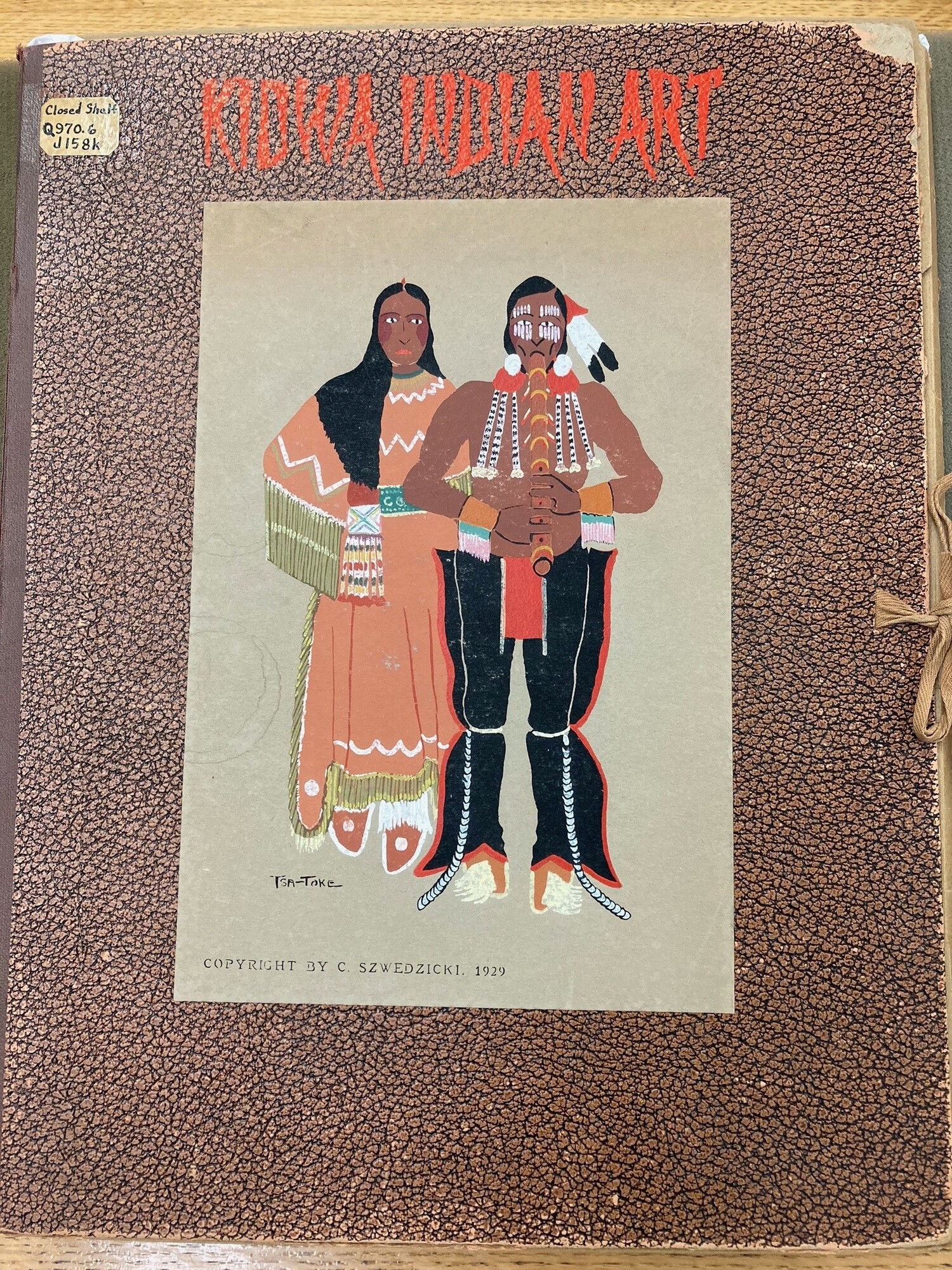 The Kiowa 5 was actually six people, 5 young men and 1 young woman. Bou-ge-Tah Smoky and 4 of the 5 young men also attended the Anadarko Boarding School, officially known as St. Patrick's Indian School. Unfortunately, the mission school failed to properly accredit their graduates, so the budding artists were only accepted by the state land grant college after a white Swedish professor, Dr. Oscar Jacobson, was pushed to intervene on their behalf by Native missionary workers and teachers. This portfolio includes the first 5 artists, before James Auchiah entered Oklahoma University in 1927, and Bou-ge-Tah Smoky withdrew from the international art world that same year.

The 1929 portfolio came together with Dr. Jacobson, and a French printer, C. Swedzicki, after the 1928 debut showing of the Kiowa 5 at the First International Art Exhibition in Prague. A few years later, at the 1934 Venice Biennale, the Kiowa 5's work was deemed the most popular of the various exhibits. 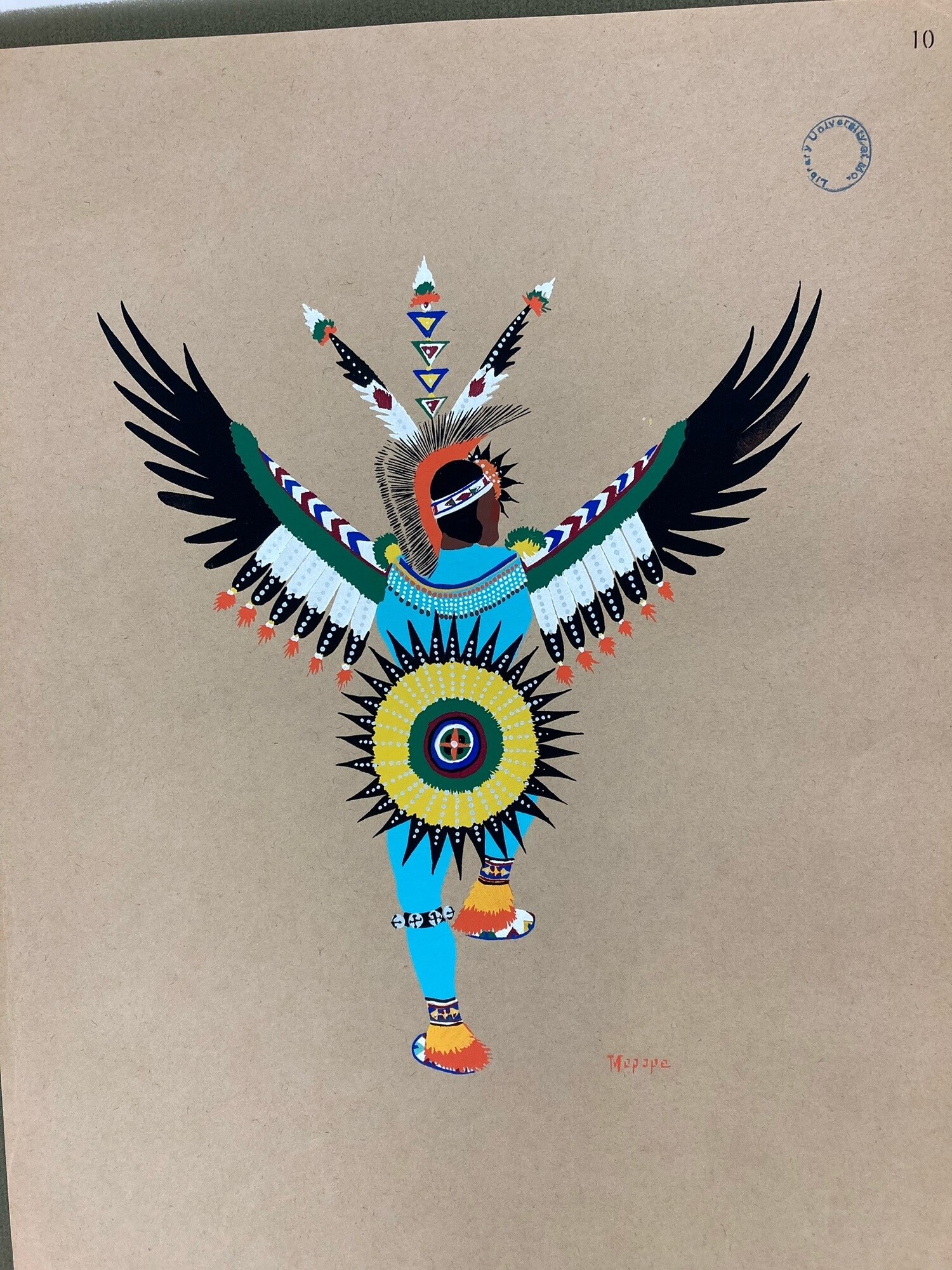 The Kiowa 5's style stemmed from the Plains hide painting and ledger art traditions. Hide painting became scarce as the U.S. destroyed the wild buffalo population. Native American artists, Plains Indians, who had previously created exquisite and detailed hide paintings were forced to create on whatever medium they had on hand. Often this was bulk made ledger-lined paper.

Mopope's relative, Silver Horn was one Kiowa artist who was active during the early reservation period of traumatic change for the Kiowa people. Silver Horn taught Mopope hide painting and traditional Kiowa art depictions in the flat Ledger art style, which Mopope continued to expand into the flat Southern Plains style painting with his contemporaries. 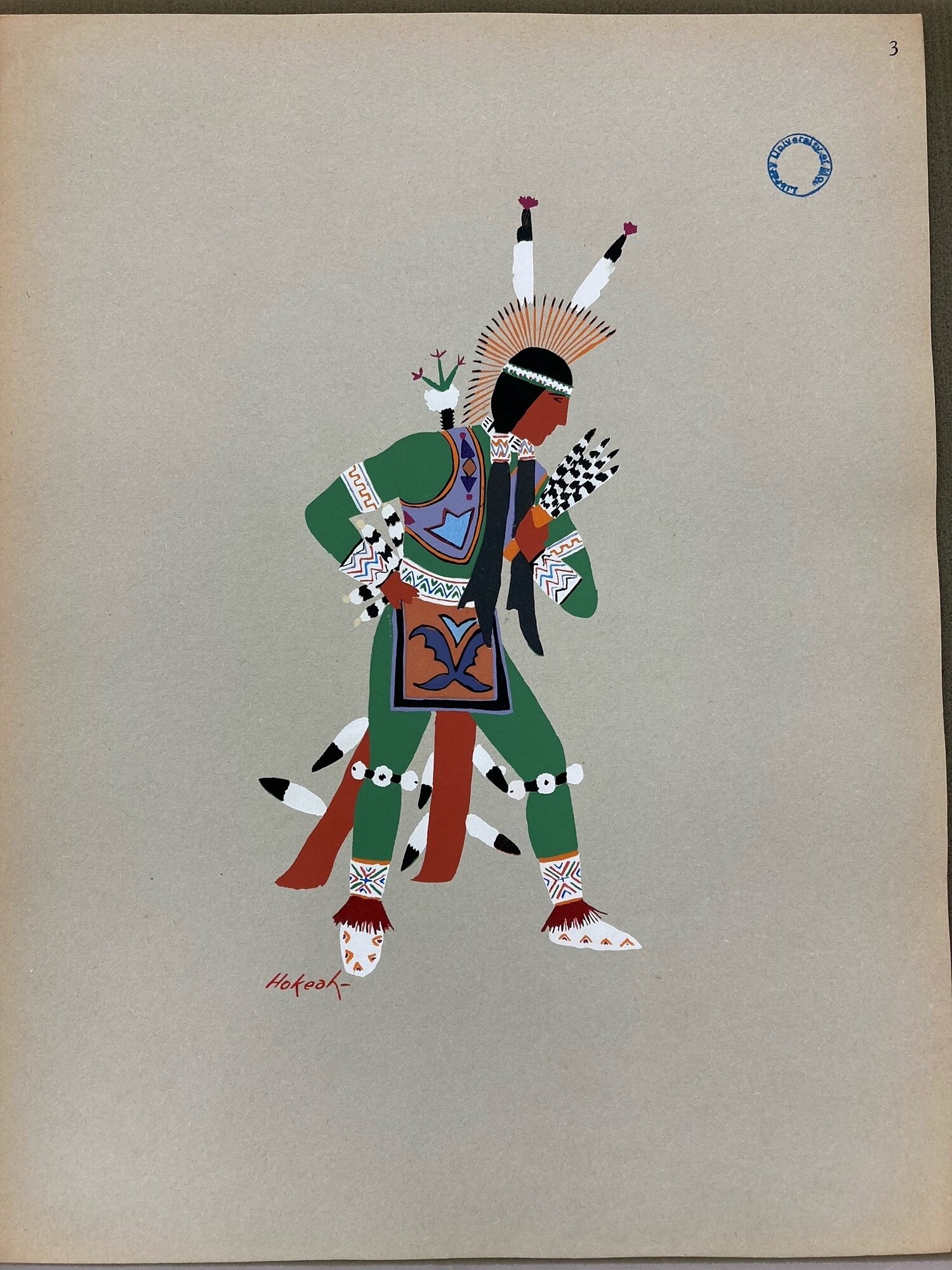 The artwork of the Kiowa Five is well known for its representational and narrative style. The artists portray ceremonial and social scenes of Kiowa life as their subject matter. Many of the oral traditions in the Kiowa culture express the purity and distinct colors of their native landscape. This is reflected in their art with singular color swaths and distinct color transitions without fading colors in or out.

Swedzicki used "pochoir" for the portfolio, which worked well with the block color and shapes of the artists. Pochoir is a style of printing images which uses very thin metal stencils for each individual color. The stencil plates are negatives, allowing part of the image to be recreated. Also called "hand printing," each stencil is colored in by hand with either watercolor, as in this portfolio, or with goache or tempera, other traditional and water-soluble paints. 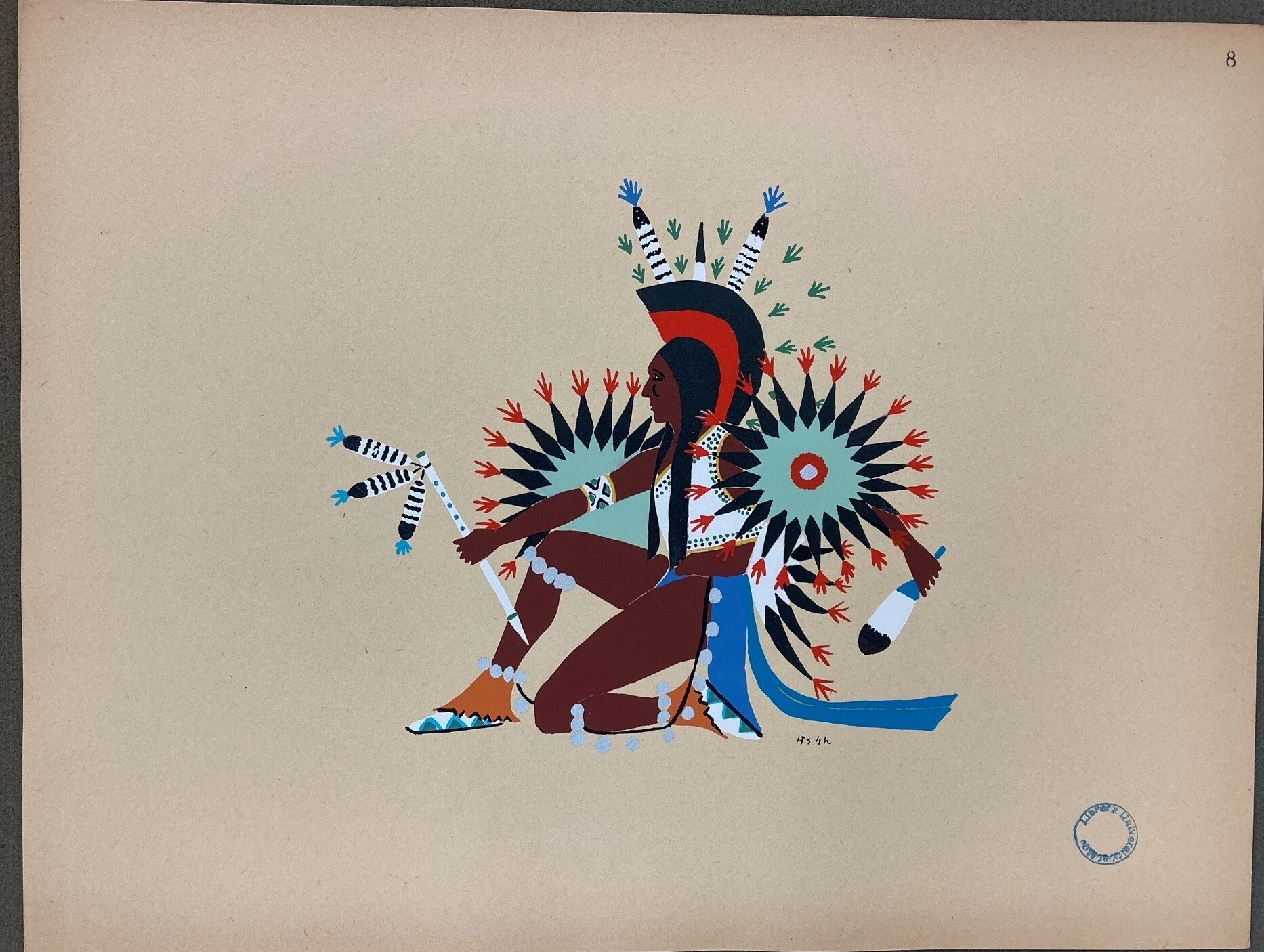 The portfolio is composed of action scenes, such as dancing and socializing, along with stationary family and regalia images. The flat perspective offers up the narrative and representational images with characteristic solid color fields, minimal backgrounds and unique detailed clothing. In this self-portrait, the artist-dancer is shown kneeling. This is a brief repose before he resumes the dance, which is itself, its own artwork. 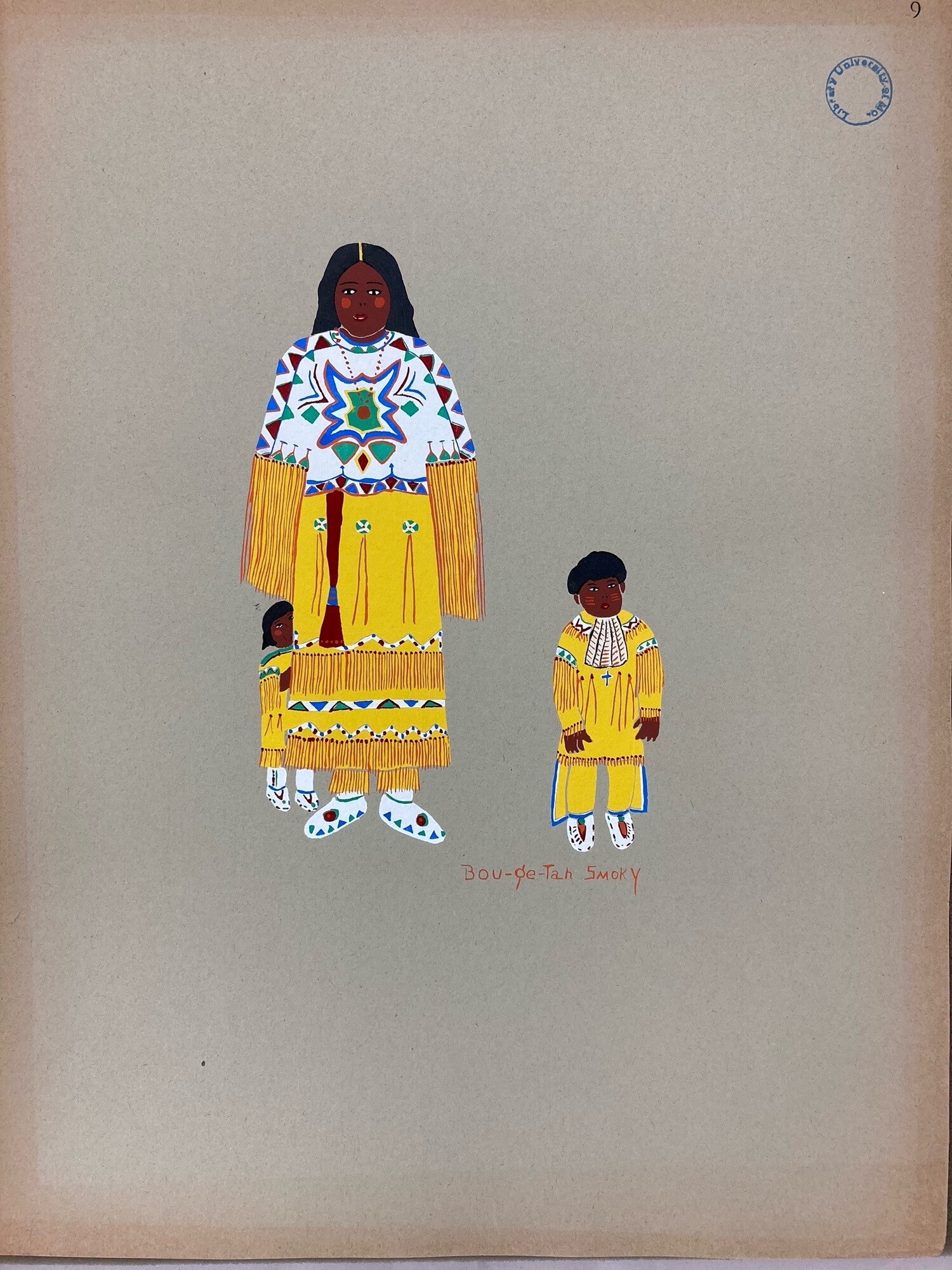 Generally speaking, Kiowa tribal society was male-oriented. Women gained prestige through the achievements of their husbands, sons, and fathers. Personal glory for women came through attractive appearance and diligence in learning skills such as tanning, skin sewing and beadworking. If women created art, they were expected to create non-representational ones while men did representational paintings. Her subjects here are posing as though for a photograph, and wearing yellow beaded buckskin attire.

Since Bou-ge-Tah Smokey receded from the art world early on, her paintings are among the rarest and most sought after creations from the Kiowa 5.