The Four Seasons and Zodiac Signs 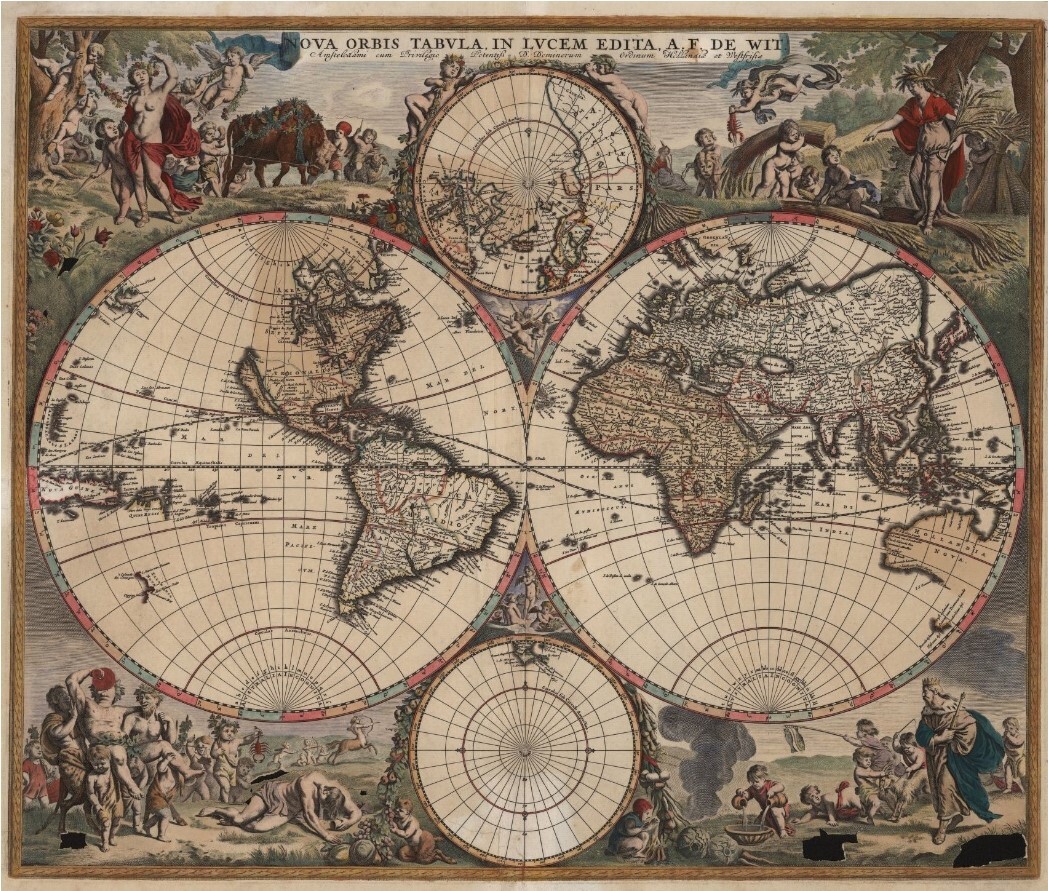 The Nova Orbis Tabula In Lucem Edita or “A New World Map Disclosed in the Light” was published by Frederik de Wit in Amsterdam in 1680. This world map projects the two hemispheres, chartings of the North and South poles, and provides new geographical insight into the Western Hemisphere. De Wit’s map features more detail about the interior of the North and South American continents, such as the Great Lakes which are now depicted as more than one body of water and the shaping of South and Central America is modernized. The charting of the North and South poles provide insight into the geographical knowledge at the time, for instance Greenland and parts of Scandanavia, Canada, Western Europe are located within the Artic Circle. The Nova Orbis Tabula In Lucem Edita was popular for it geographical details and an attractive map for its cartes-à-figures.

The Nova Orbis Tabula in Lucem Edita is illustrated with the artistic representation common in classical antiquity. The cartes-à-figures depicted here are of the four seasons, the zodiac signs, and of the four winds. The four seasons illustrated below are drawn from the ideas and engravings of Jacob Matham works in 1589 and Hendrick Goltzius’s art from 1594. De Wit personifies the changing of the seasons through the cartes-à-figures illustrated actions and is alluded throughout with design and coloring techniques. 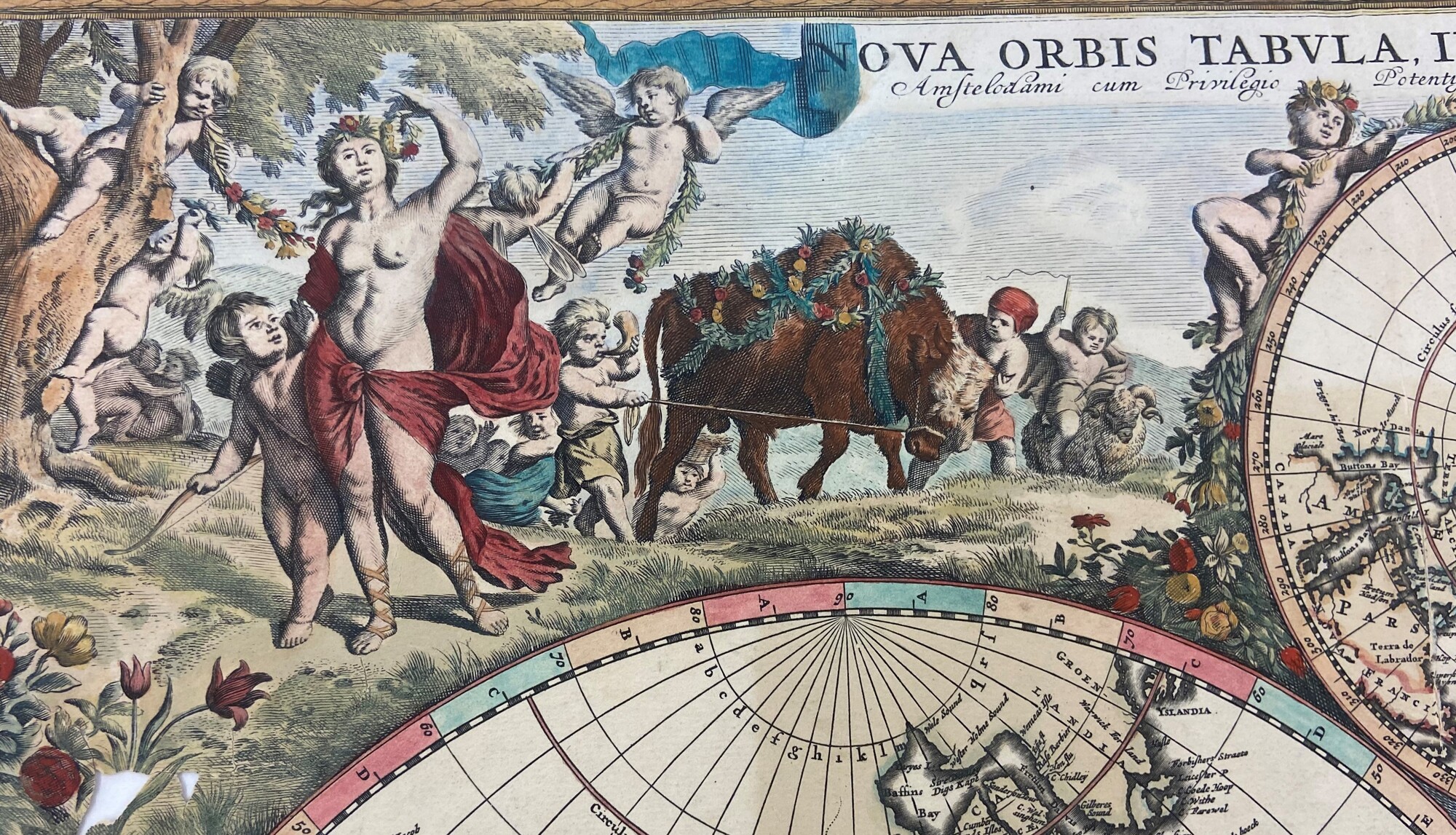 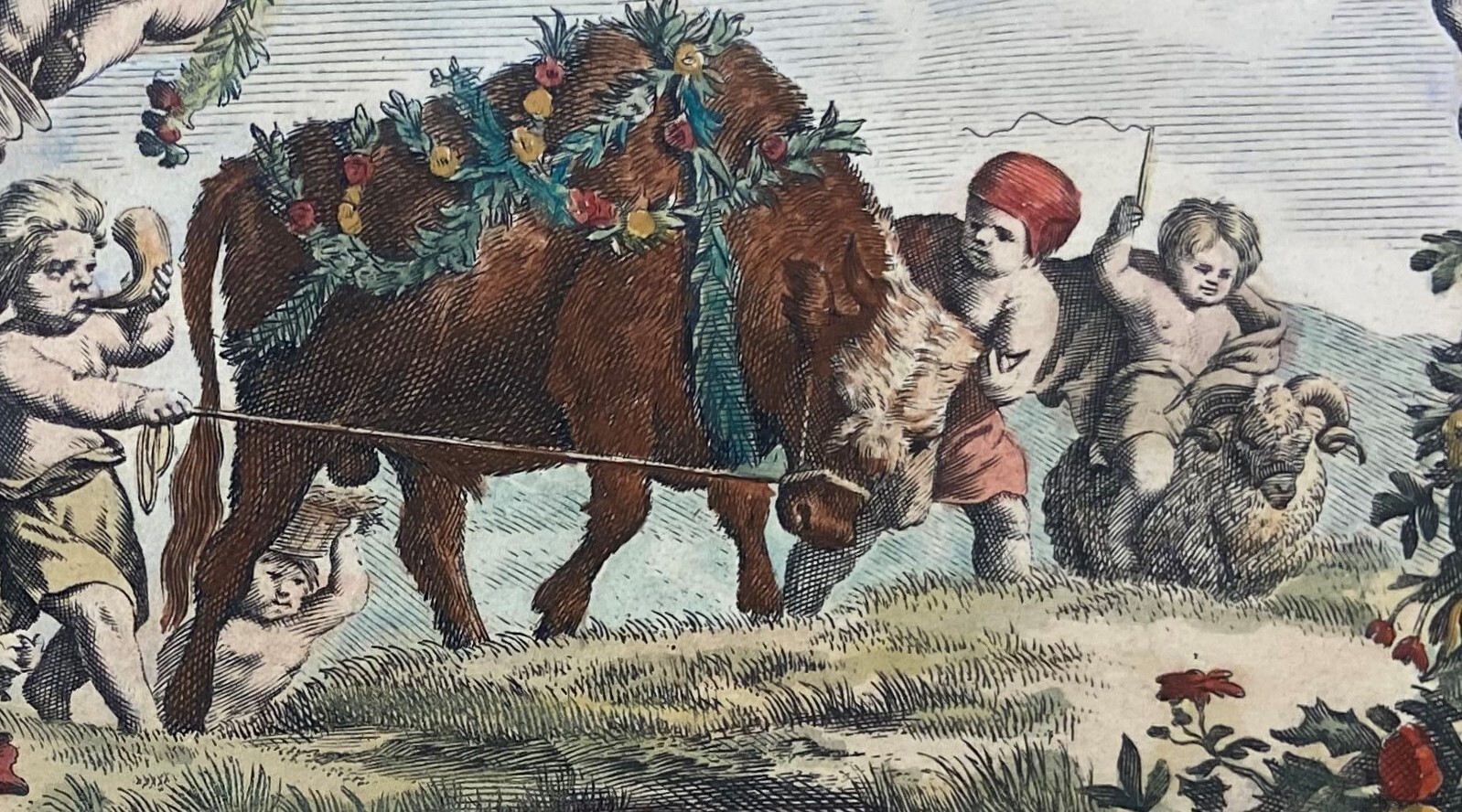 De Wit’s map also personifies the three zodiac signs associated with Spring: Aries, Taurus, and Gemini. The zoomorphic representation of Aries is seen in the small wooly ram with twisted antlers being ridden by a playful putto. The bull, a symbol of Taurus, is depicted strapped in a flower yoke and harness, pulling the putto ahold of the reins who simultaneously blows into a horn. The final zodiac sign associated with Spring is Gemini represented by the pair of twins flanking the bull. On the left side of Taurus is the twin who tugs at the reins and tries with physical strength to coax the bull while the other twin encourages the bull with words.

In the top right corner of the map is the anthropomorphic representation of Spring. Spring personifies the Roman goddesses of beauty and love, Venus. This allegory can be understood through the inclusion of her crown of flowers and her son, Cupid, by her side known for his talent in making couples fall in love. Venus is depicted as semi-nude female, shrouded in a red cloak, wearing a crown of flowers on top her head. It appears that Venus is inspecting a similar crown for which she plucked off Cupid’s head. Here, Cupid is next to her reaching for his crown with one hand and holding his bow and arrow with the other. In the foreground, are many blooming flowers, including two tulips a powerful symbol of Dutch wealth and luxury. In the background are playful putti, the small naked children with wings, a nod to the artistic Renaissance era.

The transition from Spring to Summer is evident at the top of the map where two putti sit on either side of the terrestrial chart, one adorned with a crown of flowers and the other with a wreath of harvested leaves of wheat. 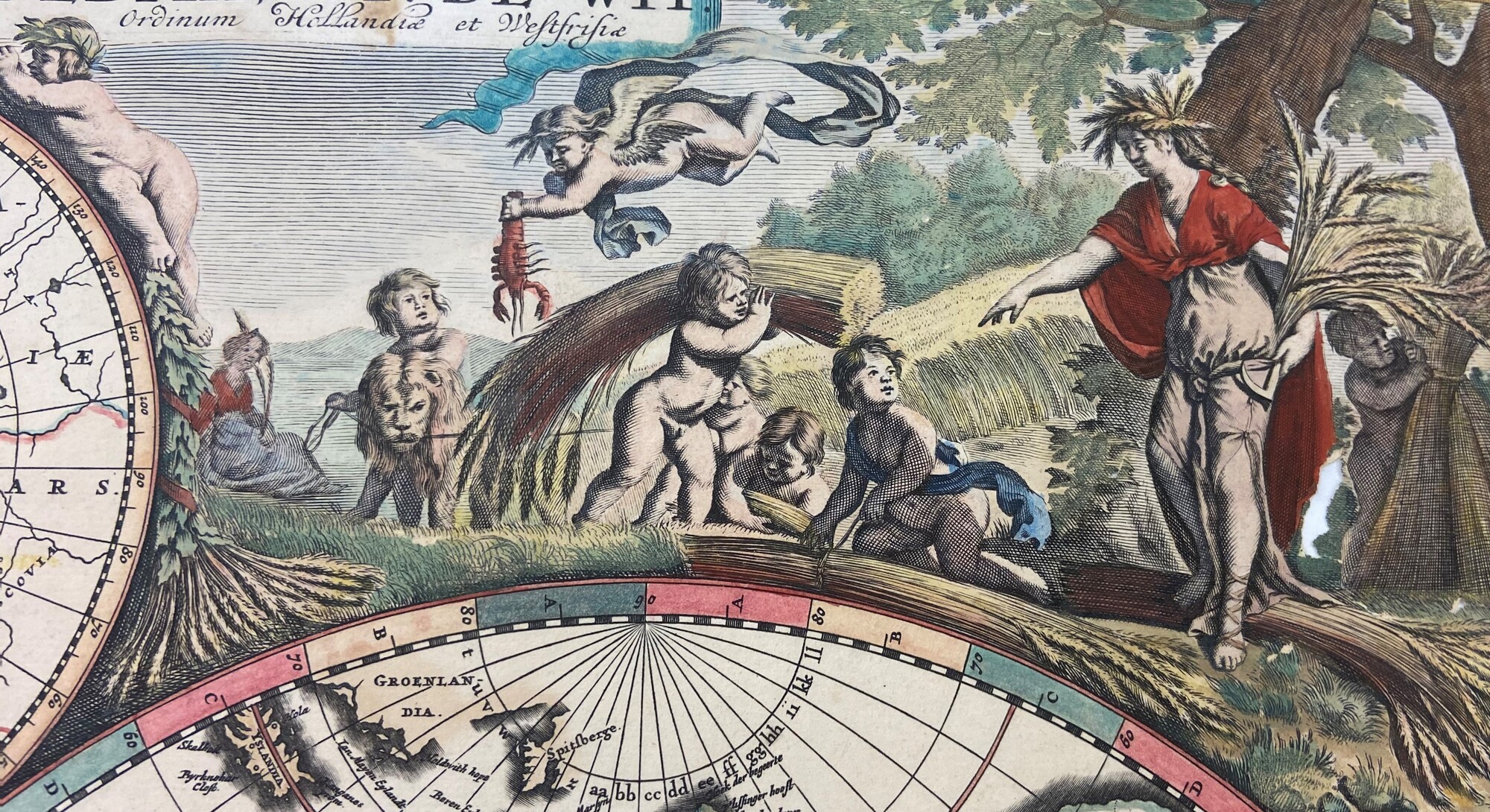 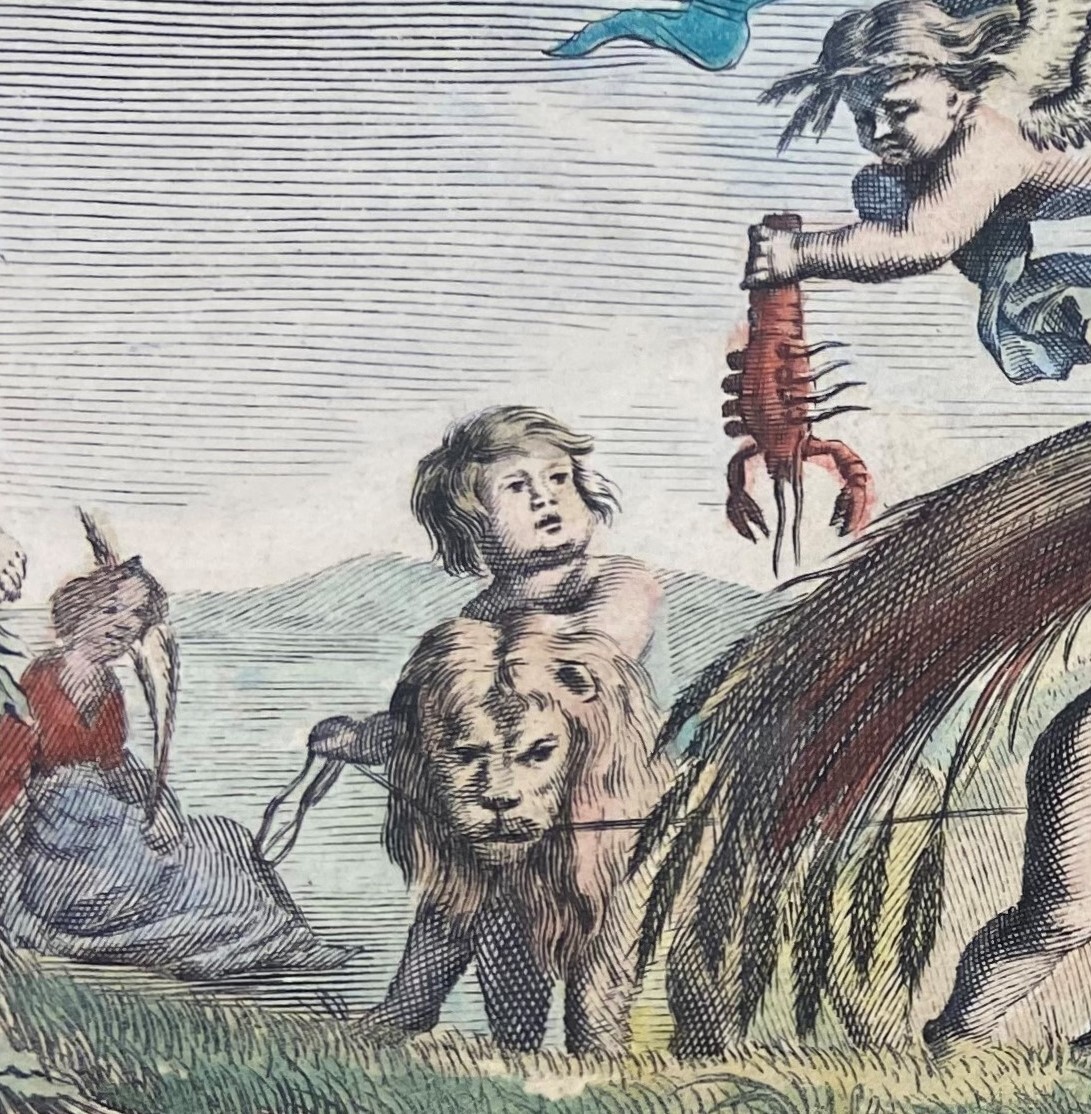 Near the left-hand side of the illustration are the symbols of the three zodiac signs associated with the summer months, Cancer, Leo, and Virgo. In the background, furthest to the left is a young girl sitting modestly fully clothed, this carte-à-figure represents Virgo, the virgin. Virgo is holding two stalks of harvested wheat, a common depiction representing late summer. Next to figure personifying Virgo, is a putto holding the head of a lion, a symbol of the zodiac sign Leo. Similarly, the putto flying above Leo holds a bright red ‘lobster-like’ crab or crayfish, a common symbol in representing Cancer during the Middle Ages, a symbol that carried over during the Early Modern Period.

Summer takes the form of a fully clothed woman collecting and directing the harvesting of wheat. Here, Summer personifies the Roman goddess of agriculture and harvest, Ceres. The allegorical representation of Ceres can be understood through her headdress of golden grains and in her left hand she holds a reaping hook - a symbol and tool of harvest. With the other hand, Ceres directs the putti how to tie the bushels. The putti are seen harvesting, carrying, and bundling stalks of wheat, a common action that would take place during the summer months. 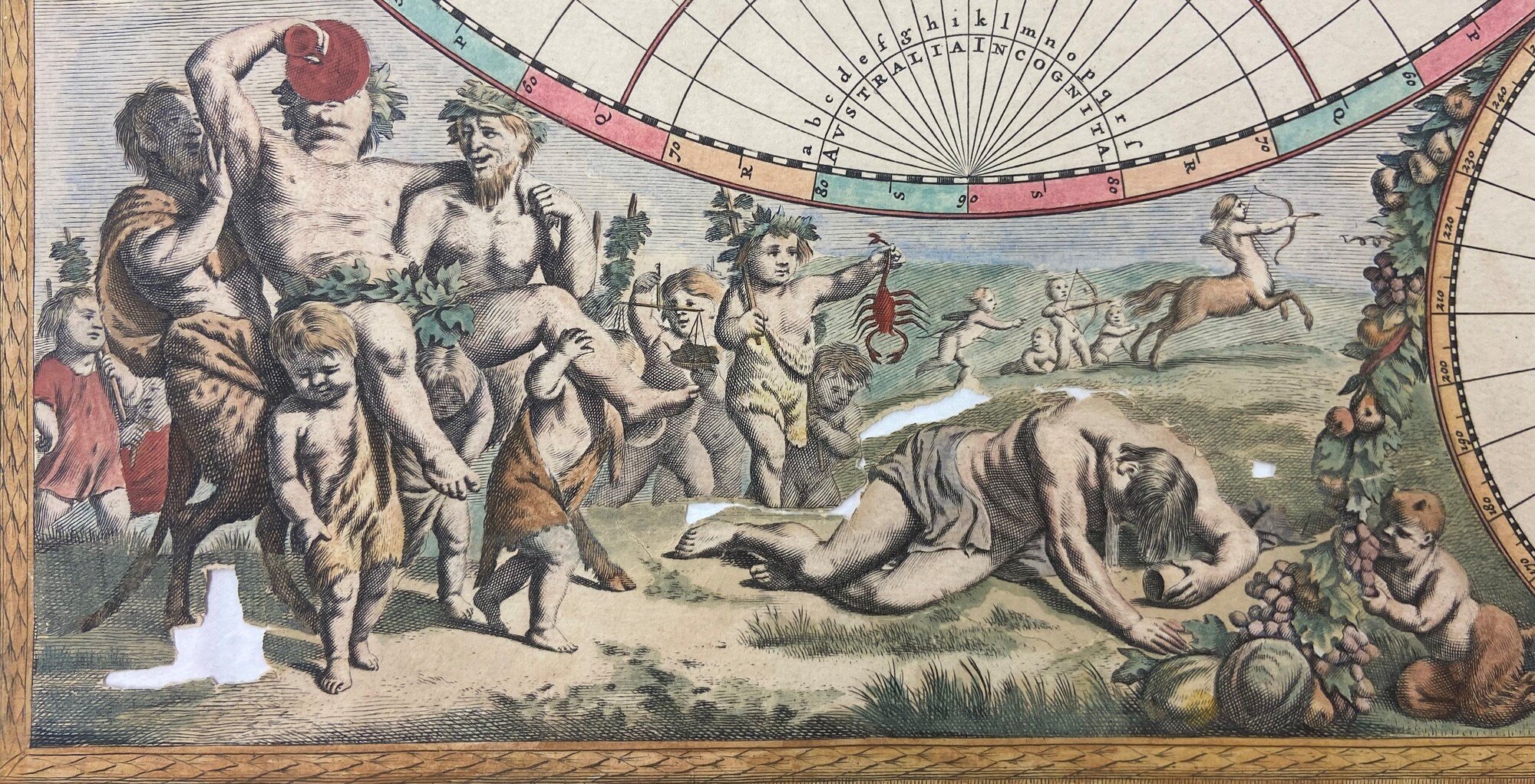 The zodiac signs associated with Autumn are Libra, Scorpio, and Sagittarius. The symbol representative of Libra is the scale of justice seen here being carried by a putto behind Bacchus. Next to Libra is another putto holding onto a bright red scorpion symbolizing Scorpio. Lastly, in the background are four small putti and one points a bow and arrow directly aiming at a fleeing centaur, both the archer and the centaur are symbols of the zodiac sign Sagittarius.

The allegorical representation of Autumn portrays the Roman god of wine, Bacchus the prominent figure being paraded around by satyrs (half goat half man), and putti. Bacchus is depicted in semi-nude form, wearing a crown of leaves, and drinking from an enormous chalice. It is most likely that these adult men, including Bacchus himself are heavily intoxicated. This is evident by their posture, facial expressions, as well as the slumped figure on the ground, glass still in hand, expelling liquid. The illustrated representation of Autumn is shown through the changing of the landscape as the grass turns yellow and becomes sparse. Additionally, fruits such as the apples, grapes and winter squash are featured mid harvest by a young satyr. 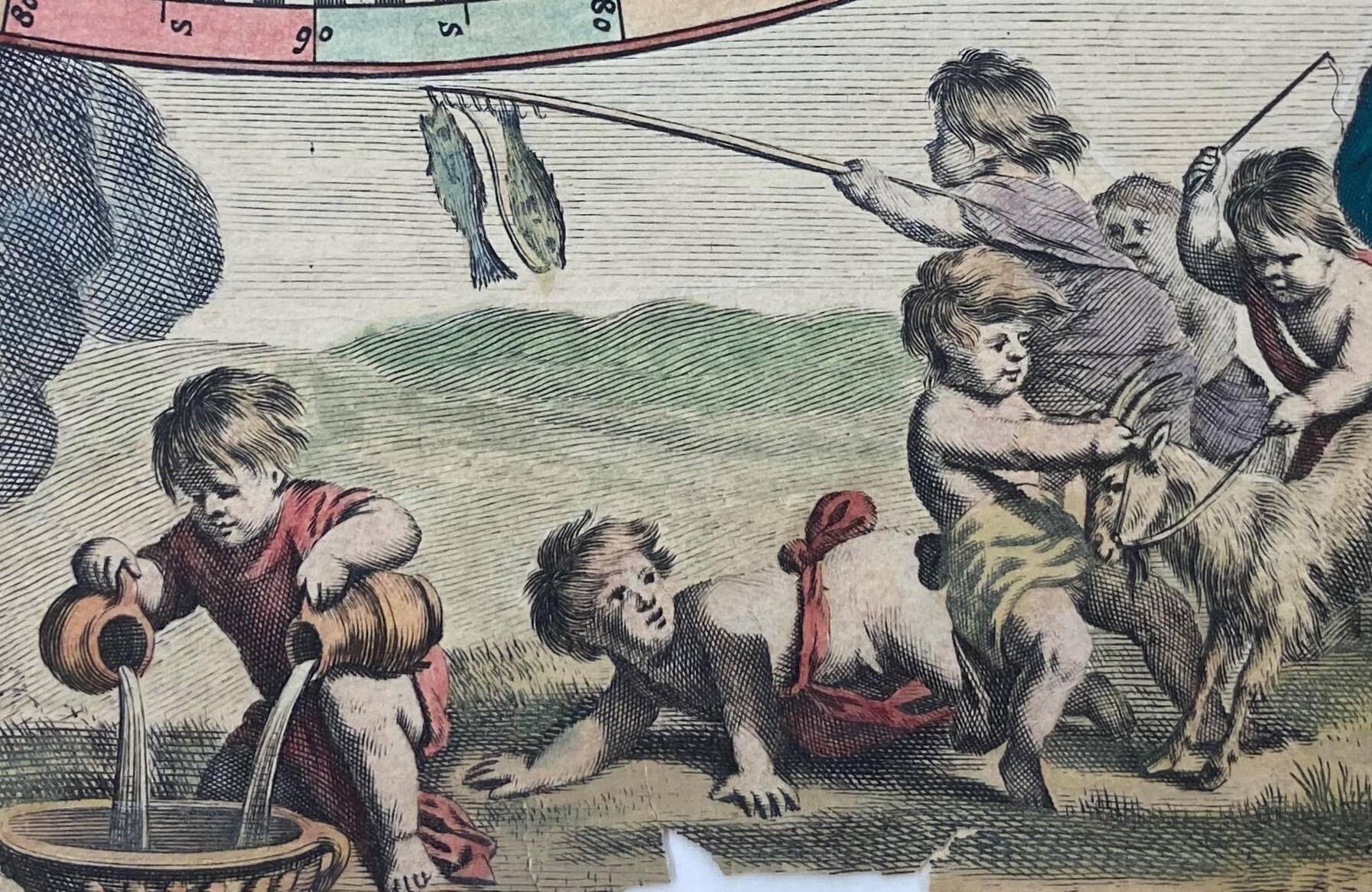 The three signs of the zodiac associated with Winter are Capricorn, Aquarius, and Pisces. The illustrated representation of Capricorn is symbolized by the goat being tugged and whipped by the putto next to Aeolus. Near the smoke from the kindling fire, is another putto actively pouring water into a shallow bowl, here the pitchers pouring water are a symbolic act representative of Aquarius. Lastly, the two fish hanging from a pole, to dry and to later feast upon, are the symbol associated with the last of the zodiac signs the Pisces.

As the seasons shift, and Autumn turns into Winter, the ground becomes noticeably less green. Winter is allegorically portrayed by the god and king of the winds, Aeolus. Here, Aeolus is the regal figure wearing long garments, sporting an animal-skin coat noted by the fox tail collar and holds a specter and adorning crown. The overall mood has shifted, there are dark clouds looming above, and the putti in the background are rushed and frantic to prepare a feast for the king of the winds. To convey the bitter cold associated with winter and cycle of the seasons, one putto rests huddled next to a kindling fire to stay warm. Featured above the resting putto are the crops of a winter harvest such as carrots, turnips, and cabbage.