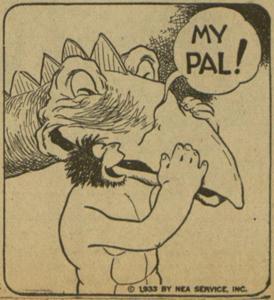 1933 was a big year for dinosaurs. The landmark film King Kong was released, featuring a giant ape from an uncharted island inhabited by dinosaurs. Two exhibits at the Chicago World's Fair featured animatronic, roaring dinosaurs. And drawing on the popularity of these prehistoric creatures, a cartoon strip about a Stone Age caveman and his pet dinosaur Dinny was picked up by the Newspaper Enterprise Association syndicate, and the world met Alley Oop.

Alley Oop is a comic strip created by V.T. Hamlin about the caveman Alley Oop and his friends. Alley lives in the Kingdom of Moo, whose residents include Alley's female counterpart Ooola, his friend Foozy, King Guz, and the Grand Wizer, a witch doctor. Combining the physical comedy of vaudeville with the ongoing dramas of a small town, and setting it in a prehistoric world populated by dinosaurs both fierce and friendly, Hamlin set up Alley Oop for success from the beginning.

In 1930, he came up with the idea of a comic strip set in what he called the "Bone Age." The year was spent sketching all manner of dinosaurs and cavemen, but Hamlin grew frustrated with what began to seem a trite idea, doomed to failure. So he threw the entire year's drawings into the fireplace. The next year Oop the Mighty, as the strip was originally called, kept calling to him, and he decided to try it again. In 1933, the small syndicate Bonnett-Brown picked up his strip, which quickly became their most popular feature. Within a few months, however, Bonnet-Brown folded. Fortunately, the strip was grabbed by the Newspaper Enterprise Association and was introduced to a much wider audience, appearing alongside other classic strips such as Blondie, Gasoline Alley, Nancy, Mutt and Jeff, and Captain Easy.

Towards the end of the 1930s, Hamlin grew weary of the narrative limitations of a strip set solely in prehistoric times. His wife, Dorothy, came up with the idea to introduce a time machine, freeing Alley Oop from these constraints. In April of 1939, Alley and Ooola were transported out of Moo and into the 20th-century laboratory of Dr. Elbert Wonmug. Alley was soon sent to Troy, participating in the stories from the Iliad and the Odyssey. Jumping through time, the strip's characters have encountered many historic and literary characters over the years, including Cleopatra, King Arthur, Napoleon, Shakespeare, King Solomon, Robinson Crusoe, and Robert E. Lee. 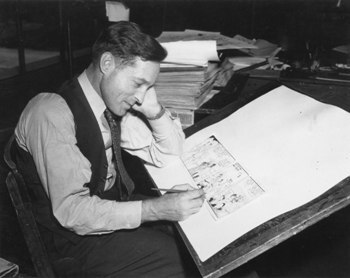 V.T. Hamlin at drawing board.
In 1950, the syndicate suggested Hamlin hire an assistant. David Graue came on board, and in the mid-60s, he began writing some of the daily storylines. By the end of the decade, he had completely taken over this responsibility. When Hamlin retired in 1973, Graue began working on the Sundays as well. Jack Bender became the artist in 1991, and Graue fully retired in 2001. Carole Bender began as a letterer and assistant in 1992 and now is in charge of the writing. Alley Oop, now in its 75th year, is carried by 650 newspapers. From the earliest cave paintings to the animated web cartoons of today, humans have been expressing themselves and telling their stories through visual media. Alley Oop, like any comic, serves as a cultural artifact. It reflects on its audience and times: what its readers found funny, what issues were important to them, what they read, what they found attractive, etc. Because the comic strip has always been a popular art form, it can reflect all these on a wide scale. The nature of the production of daily comic strips allows them to respond to events with an immediacy that is unachievable in more traditionally respected forms such as a novel or non-fiction book. This gives the modern-day reader a unique snapshot of life in an era contemporary to the strip, even if it is about cavemen and dinosaurs.
V. T. Hamlin →
Introduction