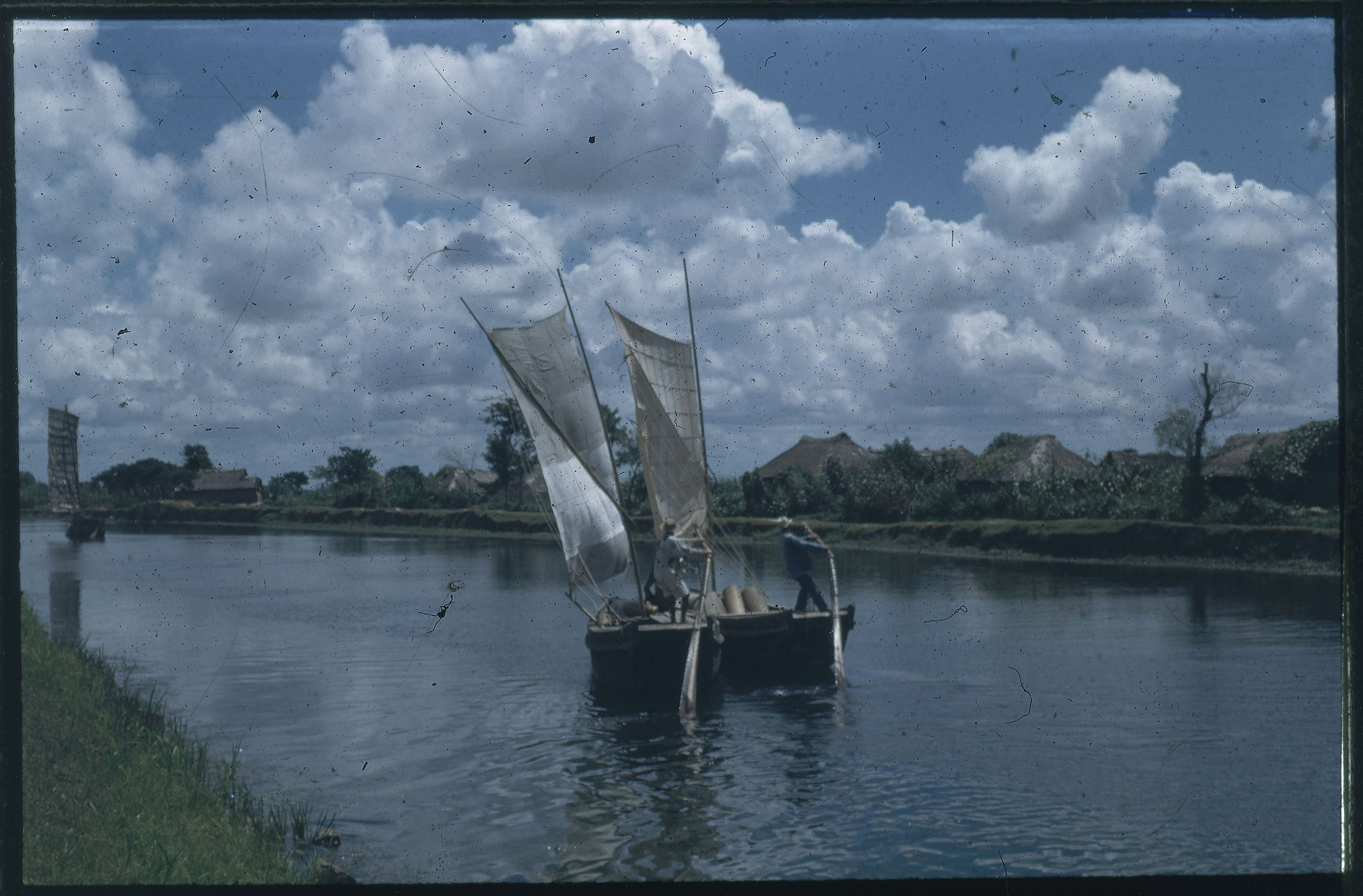 Soochow, now called Suzhou, is located in southeastern Jiangsu Province. It is one of the oldest and most famous cities of China which is also served as the capital in Chinese history. There is a popular and familiar quotation to describe Soochow, “Heaven above, Soochow and Hangchow below.”

Suzhou has a written history of more than 4,000 years, and the officially recognized history of the city has been more than 2,500 years. It is one of the oldest surviving cities in China, the birthplace of Wu culture, and has long been the first-level administrative region of the Jiangnan region. The capital and the economic and cultural center.

Soochow also owns plenty of historical interests and sights. The canals, stone bridges, pagodas and well-designed gardens of this city have contributed to its status as one of China's top tourist attractions. Suzhou classical gardens were included in the UNESCO World Heritage List in 1997 and 2000. It often referred to as "Venice of the East" or "Venice of China".

However, we could only know that Mr. Hiller went to the countryside of Soochow through his slides. This is an assumption that we are making he wanted to feel more original and primary views after the Nanking trip. 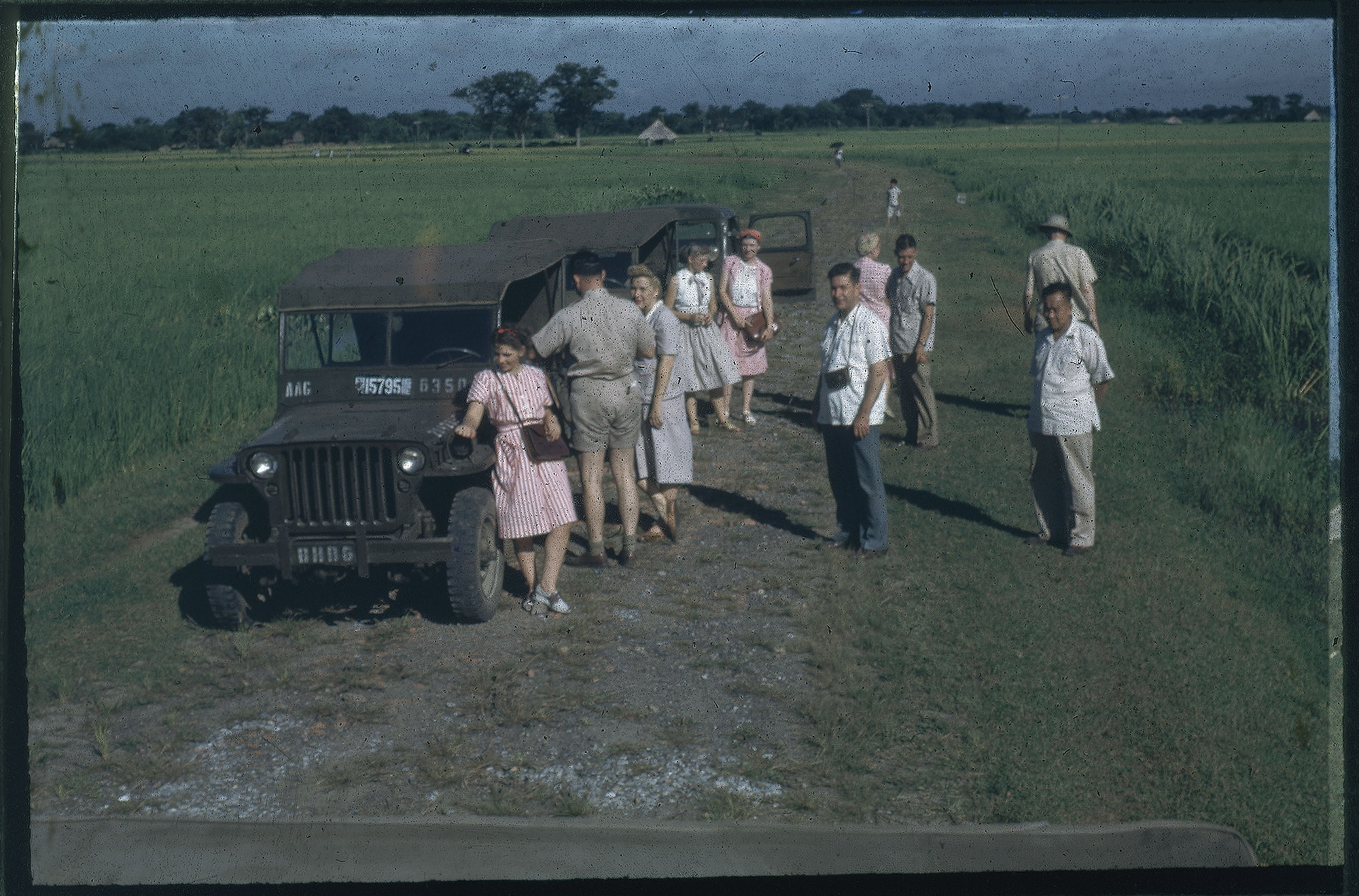 Mr. Hiller organized a three-jeep caravan trip. He and his family drove jeeps through the countryside of Soochow.

Besides Mr. Hiller and probably his friends, there were still some local people standing and walking along the side road. They look like enjoyed themselves in the countryside.

Soochow is located in the south of Yangtze River which is the perfect place for farming. Therefore, plenty of crop fields were farmed by Soochow farmers. The whole green scene was a symbol of harvest. 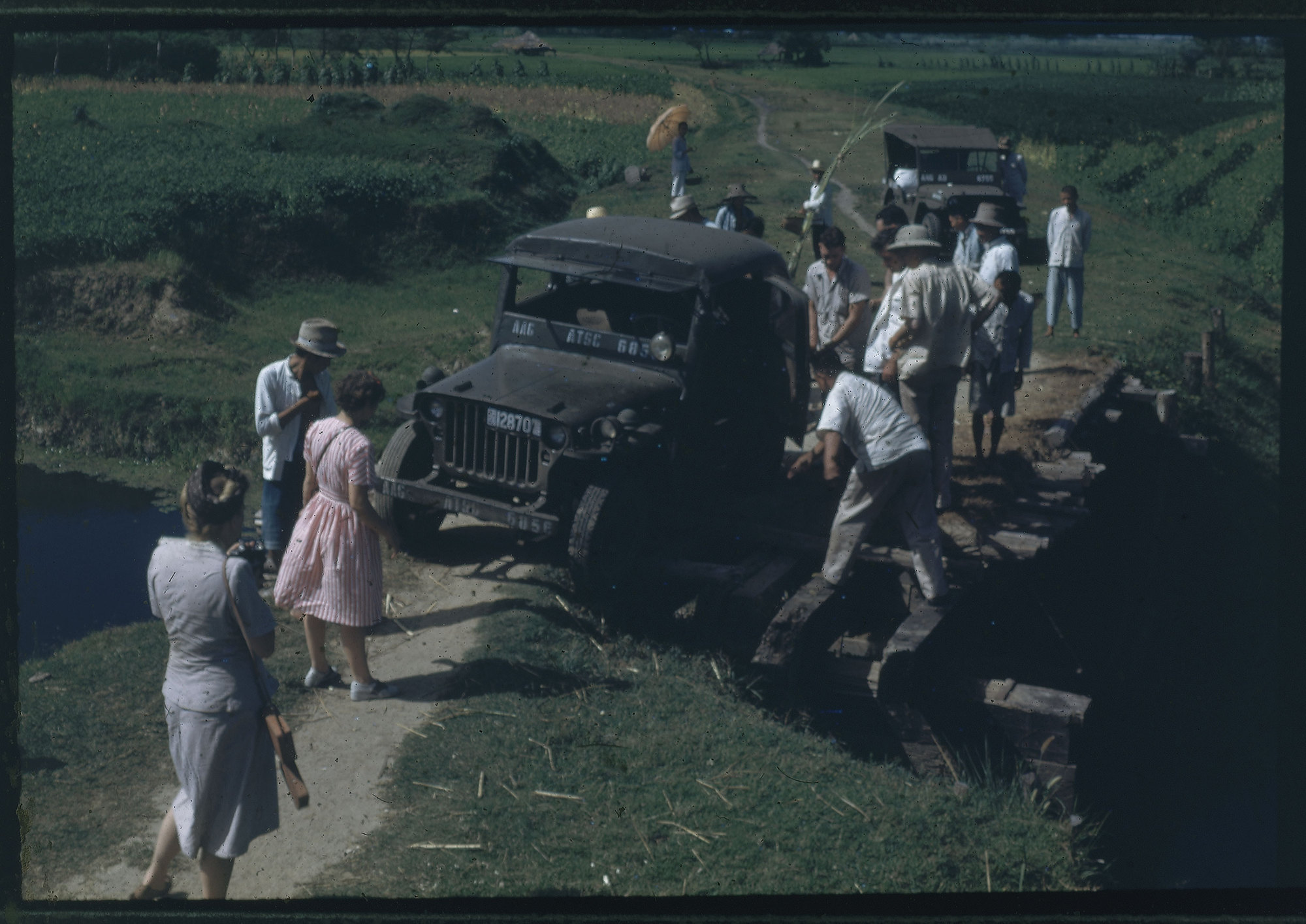 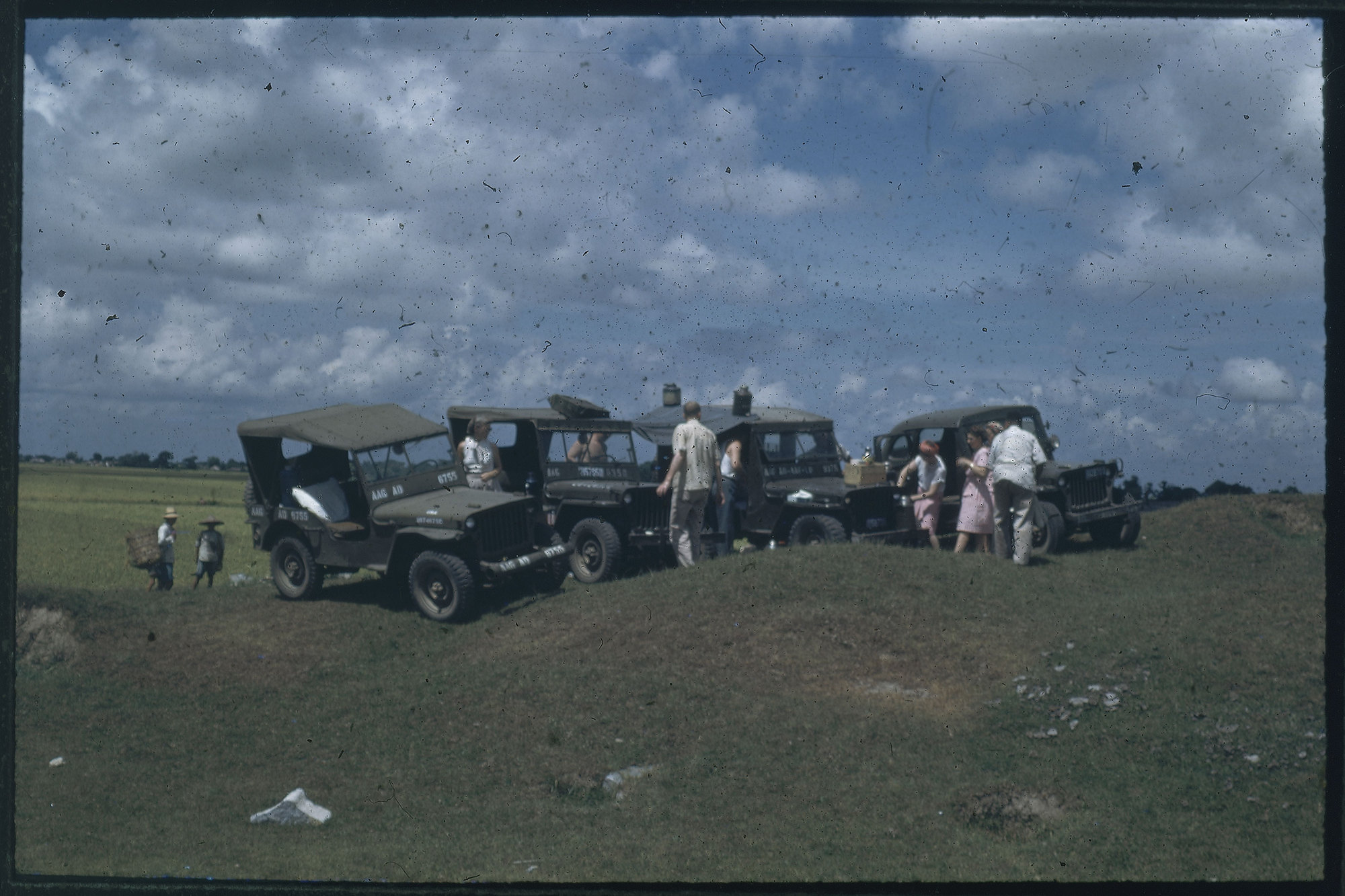 After they drove a while, unfortunately, one of their jeeps stuck into the country road.

They had no choice and then stopped the jeep. However, people who lived near the places saw the condition, helped them, and forced the jeep onto the regular road at last. I feel like this photograph looks warm and lovely because of being eager to help people is regardless of nationality.

Then, Mr. Hiller continued to drive still in countryside of Soochow. Maybe because of the nice weather and sunshine they felt they should have a break and have something to energize themselves.

Therefore, Mr. Hiller stopped the jeeps and rested just in the country road. 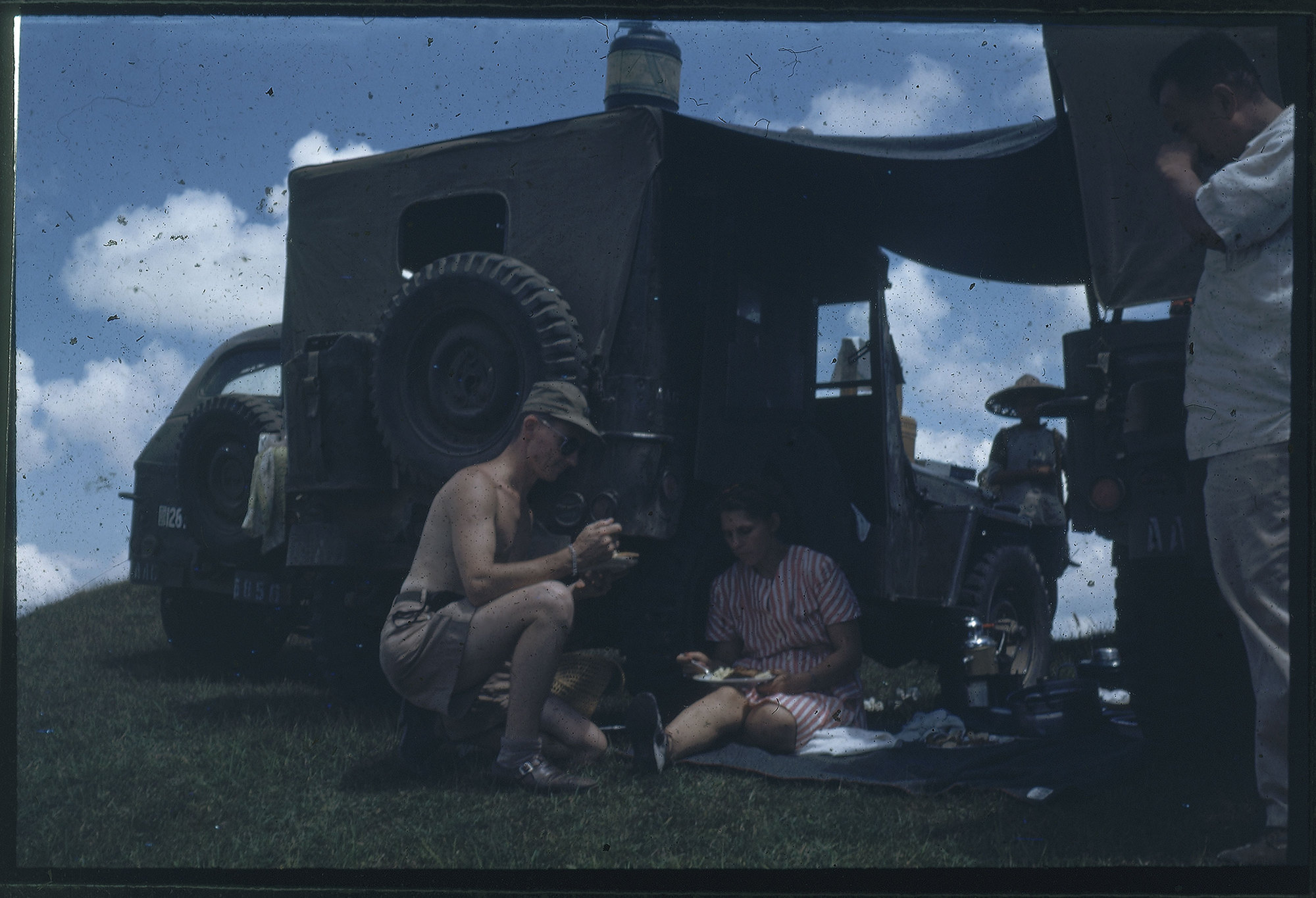 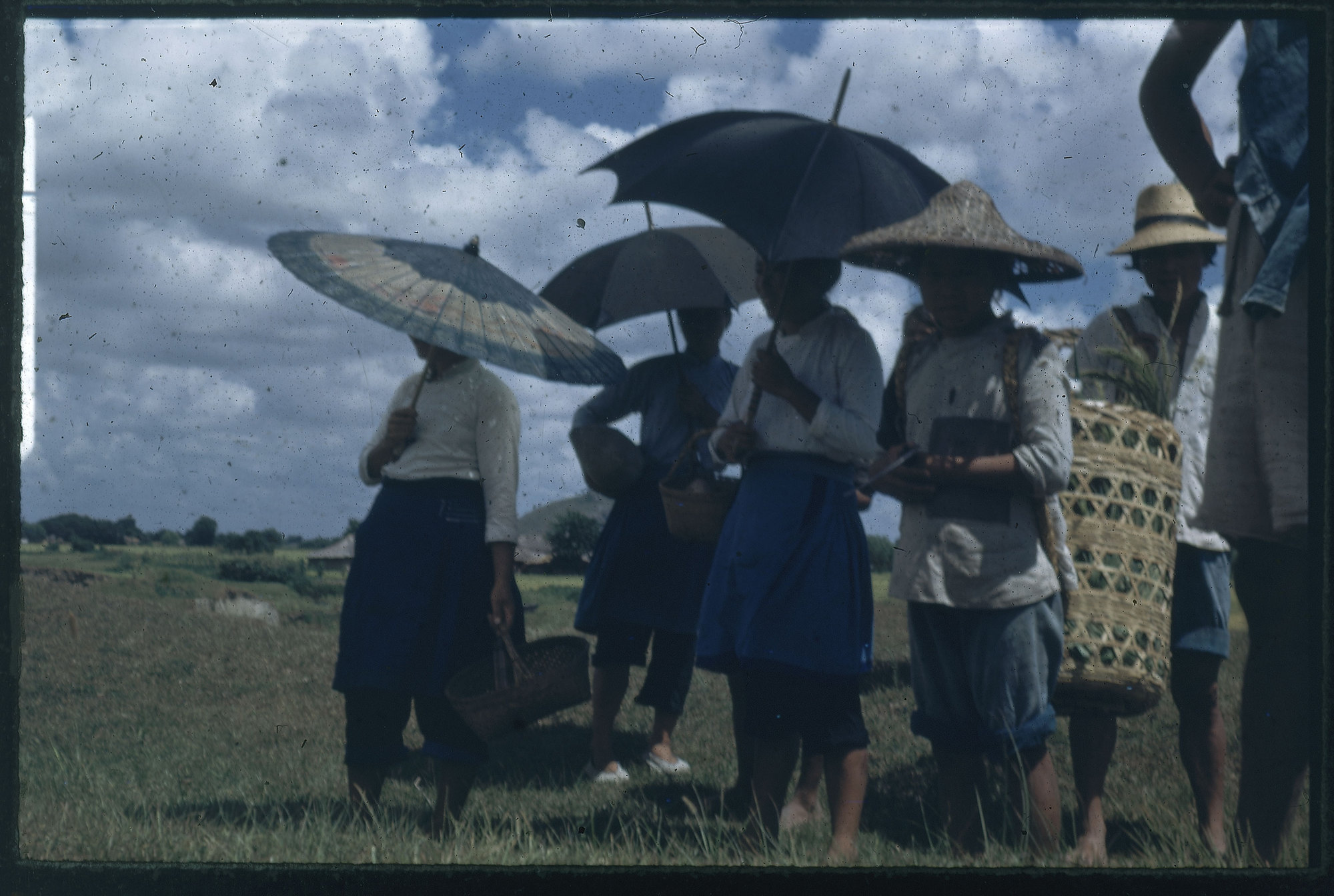 They were having an enjoyable meal break behind the jeeps since the sun was so hot.

Mr. Hiller was eating some food in half-squatted while Mrs. Hiller was sitting on the picnic cloth and eating some snacks. The sun was really hot so that Mrs. Hiller looks a little bit tired.There was also a man standing in the right of photograph and he looks tired as well.

There is another photograph shows several women was standing under the sun-umbrellas and sunhats. We cannot see them very clearly, but one of the women smiled nicely and another one was stared at the photoshot directly.

Break time was short and then, they were on the way. 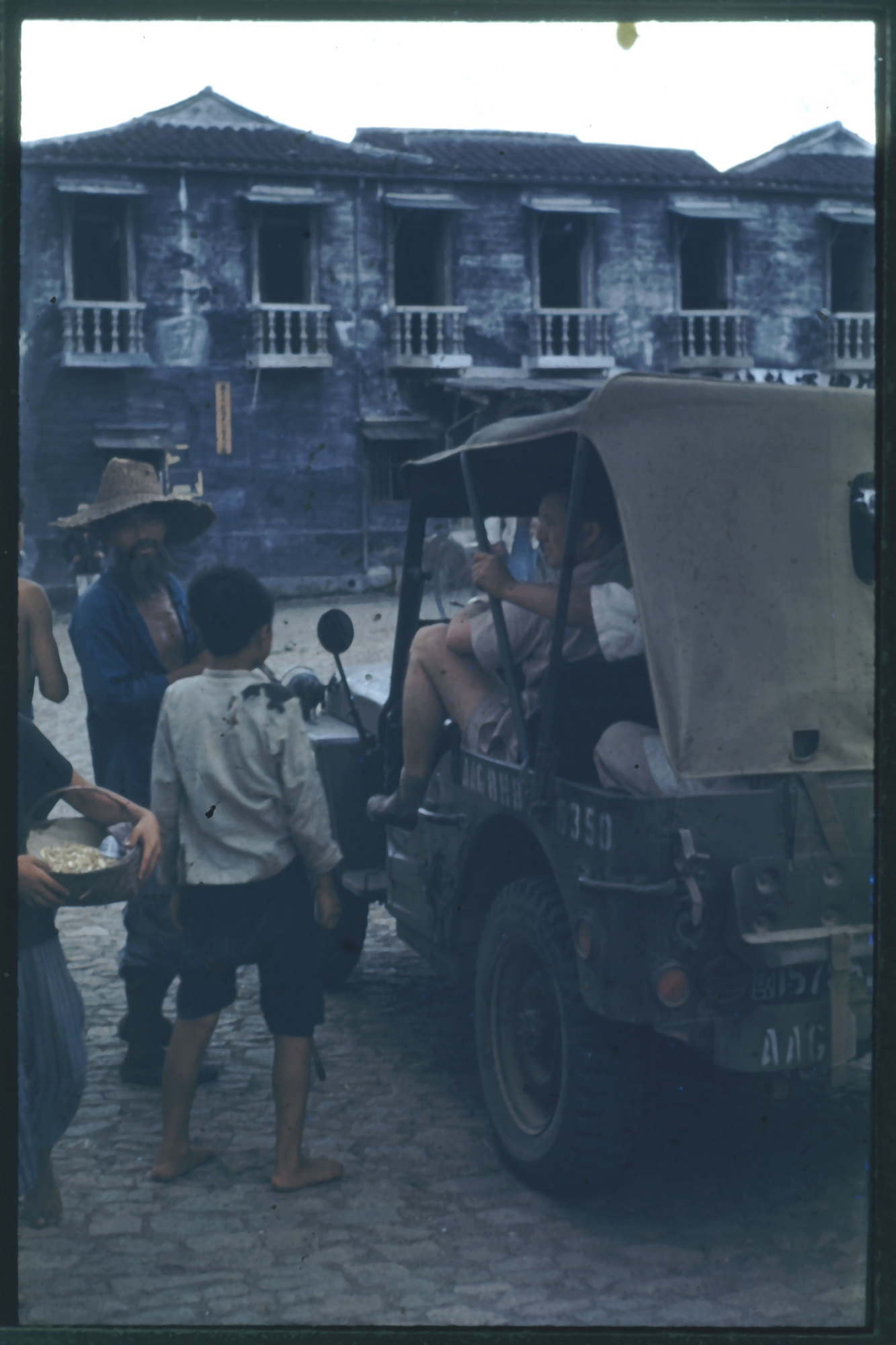 Mr. Hiller and his family arrived an unknown place near Soochow finally. This place probably is a transfer station for them to fill their jeeps with gas or to buy snacks. Through the photograph, we can see that he was chatting with local people enthusiastically and simply. Before the night came, Mr. Hiller ended this Soochow road trip.

For Mr. Hiller and his family, this Soochow trip would not be the last one, but for this part of the collection, this trip will be the end.

At last, thank you for Mr. Hiller taking so many wonderful and excellent photographs for China and in China and it is so glad that Mr. Hiller and his family took the memorable time  in 1940s China as well.