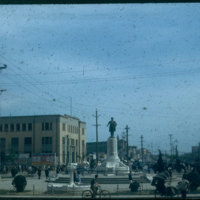 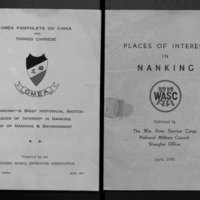 Pamphlet: Places of Interest In Nanking

Nanking was the capital of China from 1912 to 1949 during the period of the Republic of China. It is located in eastern China in Jiangsu Province. It is a famous and historical city since it has been the capital six times in Chinese federal dynasty history. 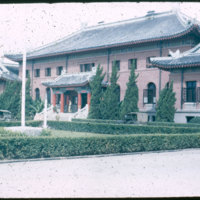 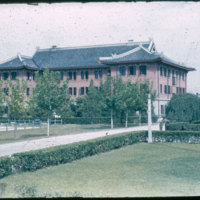 Nanking has many historical and scenic sights which are famous and popular even in today, such as the Ming Palace, O.M.E.A. (The Officers Moral Endeavor Association Building), Dr. Sun’s Mausoleum, and Ling Kho Tze.

Every piece of history like the constructions or objects are worthy to remember and memorize since they recorded the progress of people and civilization.

I believe that is the reason Mr. Hiller went to these tourist sights and took a series of photos for himself, for his family, for people, and even for the whole civilization. Therefore, just follow Mr. Hiller's footsteps to touch the civilization and feel the history of China, one of the four oldest countries in the world. 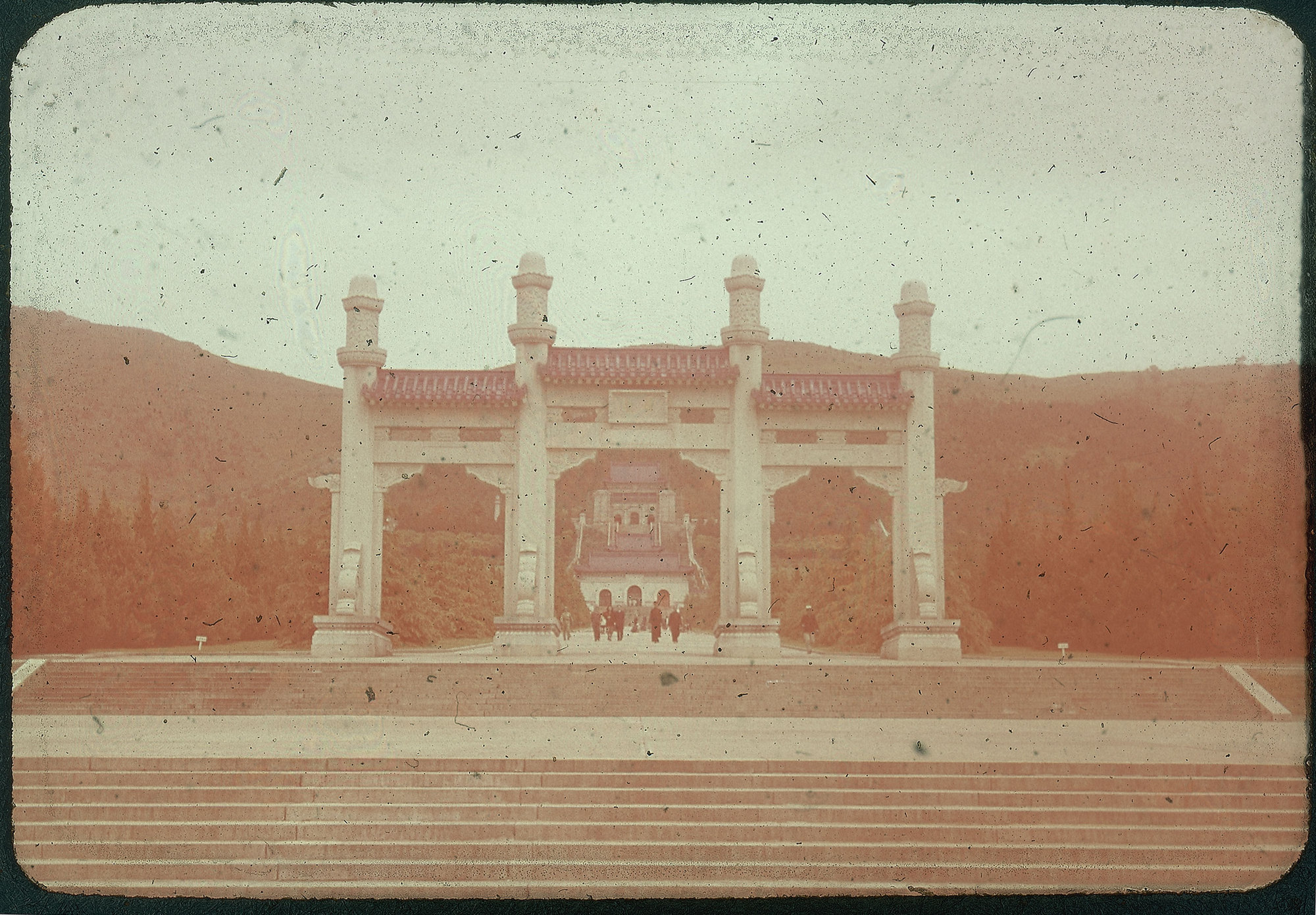 Following Mr. Hiller's footsteps and photographs, he first went to Dr. Sun’s Mausoleum (Sun Yat-sen Mausoleum), Hiller was good at walking around and capturing the moment.

Dr. Sun’s Mausoleum (Sun Yat-sen Mausoleum) is the tomb of Sun Yat-sen, known as the founding father of the Republic of China and the forerunner of the Chinese democratic revolution. This mausoleum is located in Nanking (Nanjing) of Jiangsu Province, which is the south of Zijin Mountain, the west of Linggu Temple and east of Ming Xiaoling (Ming Tomb).

After Sun Yat-sen died in Beijing in March 1925, the Chinese Nationalist Party built a mausoleum for him in Nanjing in accordance with his wishes. The Sun Yat-sen Mausoleum began construction in January 1926. In the spring of 1929, the main buildings such as the ceremonies were built. On June 1st, Sun Yat-sen was buried. The entire mausoleum was completed in 1931. 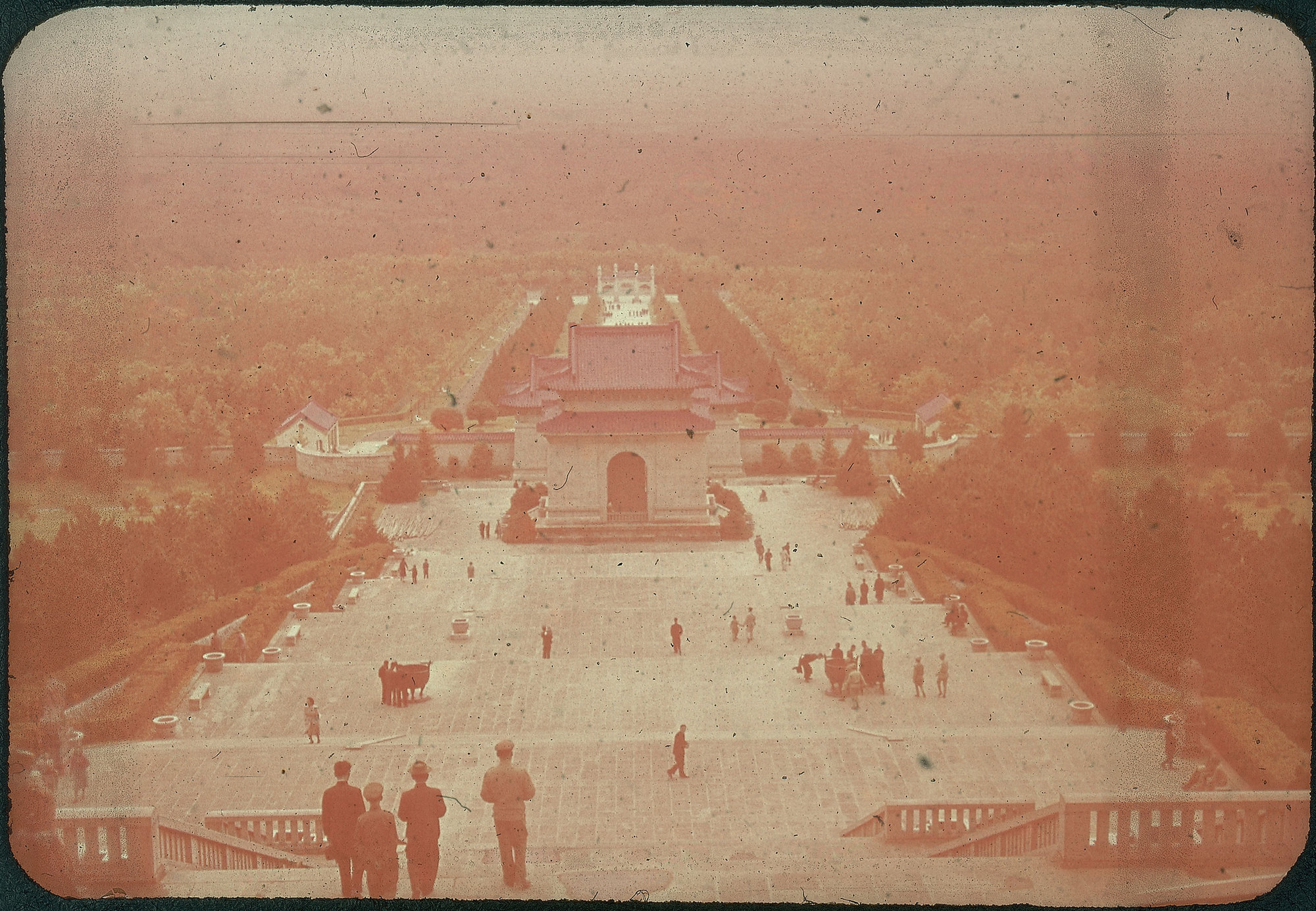 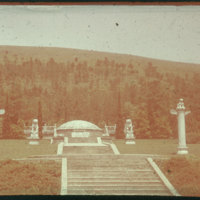 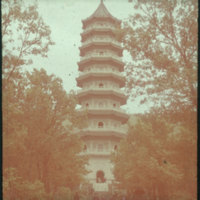 Ling Ko Tze (or Linggu Temple) is a Buddhist temple in Nanking which was first built in 514 AD during the Liang Dynasty. The most remarkable construction of Ling Ko Tze is Linggu Pagoda (or Linggu Tower) which was built from 1930 to 1933 to commemorate the soldiers who lost their lives in the Northern Expedition.

Actually, Linggu Pagoda is not closed to Linggu Temple. Therefore, people need to take a short walk from the temple to the pagoda. During this short walk, they could feel the natural view and historical constructions at the same time.

Tan Yankai Tomb is part of Ling Ko Tze Scenic Area and located in the northwest of it. This tomb is designed as symmetrical and stylized, differenciated to the regular layout. Tan Yankai was a famous Chinese politician, calligrapher and gourmet. He made a lot of achievements for China in late nineteenth century and early twentieth century. Therefore, that is why his tomb was built in such an important area of Nanking. 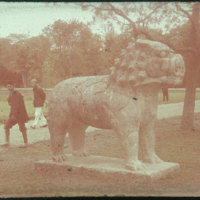 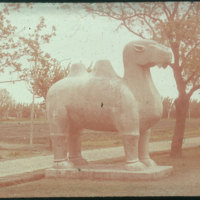 Ming Tomb (Ming Xiaoling Mausoleum) is another important place Mr. Hiller visited. It is the mausoleum of Hongwu Emperor, the founder of Ming Dynasty. His wife, Empress Ma was buried in the same tomb with him.

Ming Tomb lies at the southern foot of Purple Mountain, which began in 1381 (Hongwu Emperor) and ended in 1405 (His son, Yongle Emperor). The overall tomb layout is divided into two parts: one is Shinto and the other is the mausoleum, the main building of the mausoleum, such as temples and treasure houses. The depth of the cemetery is 2.62 kilometers and the perimeter was 45 miles around the red wall.

Still following Mr. Hiller's footstep, we found that he was interested in the stoned statues because he took lot of photographs of different statuses while crossing the Elephant Road.

These stone statues are located in Ming Xiaoling Mausoleum deity, which embody the etiquette requirements of the royal tomb. There are twenty-four stone statuestotal, which are six different stone animals statues that show each animal both in sitting and standing styles. 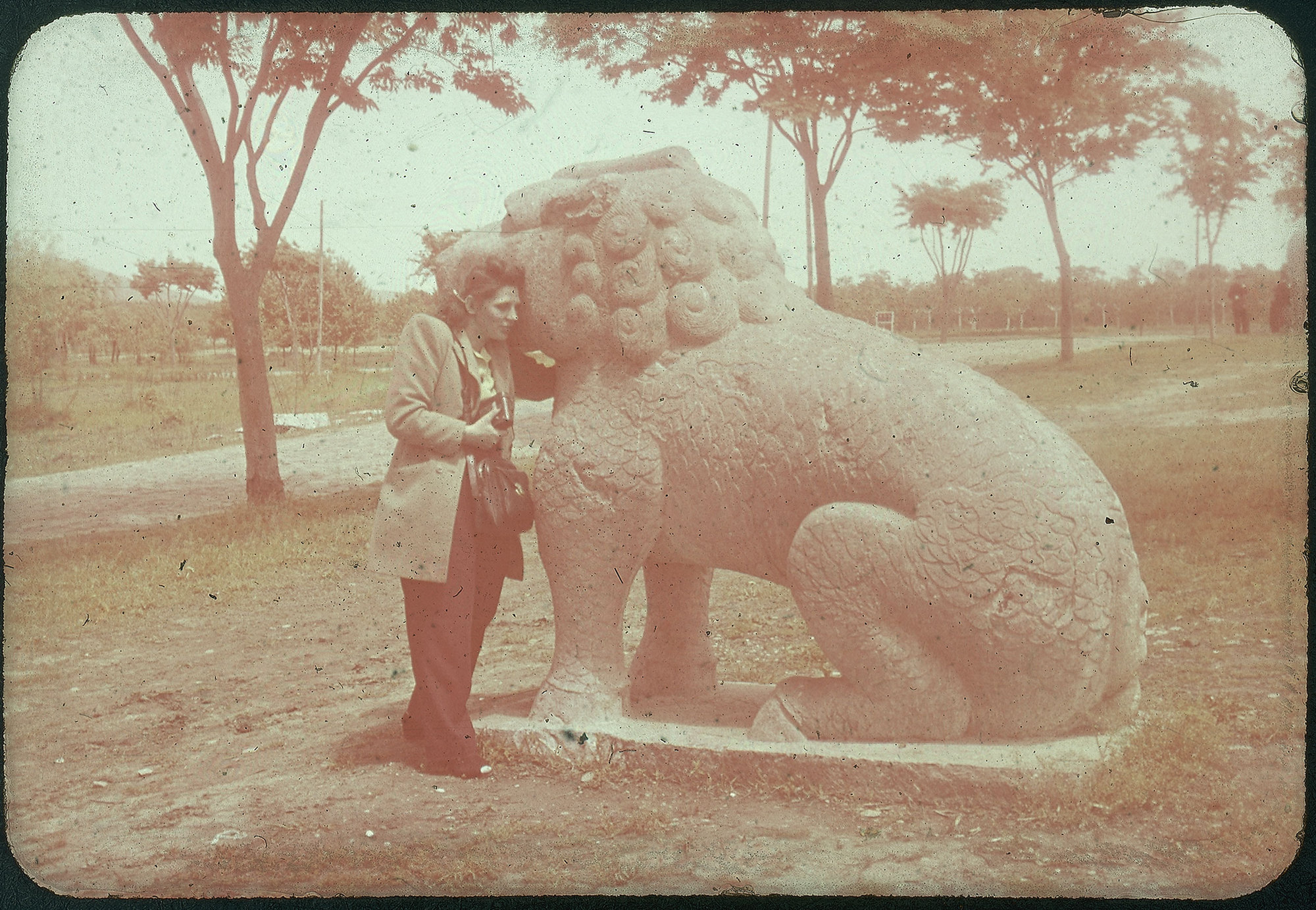 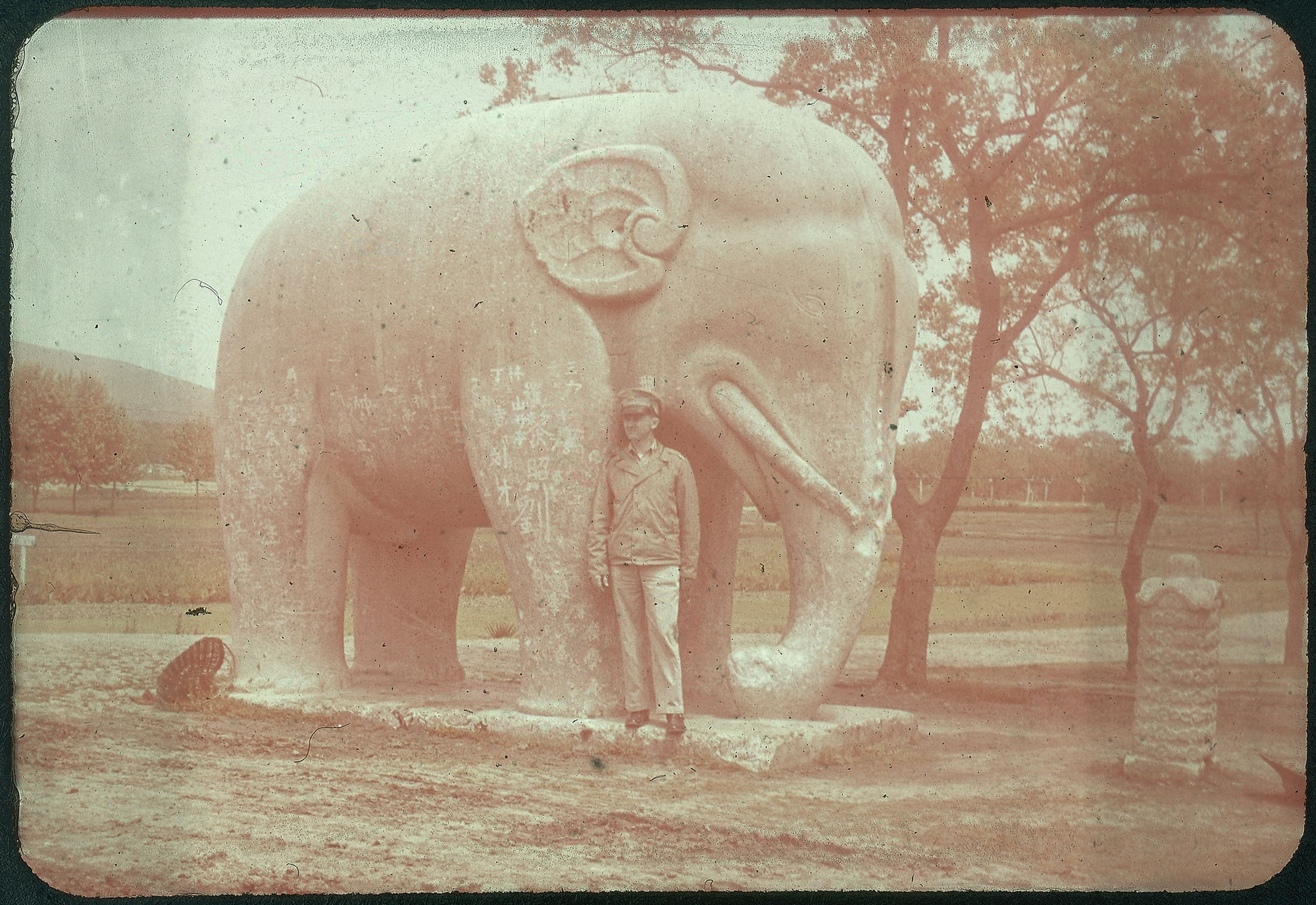 Actually, Ming Xiaoling had been finished more than 600 years. The wooden structure of many buildings does not exist any more, but the pattern of the mausoleum still retains the original grand style and the underground tomb palace is intact as well.

Ming Tomb is the head of Ming Emperors' Mausoleum, which represents the highest achievement of architecture and stone carving art in the early Ming Dynasty. It directly affects the shape of more than twenty emperors' mausoleums in the past 500 years of the Ming and Qing Dynasties which distributed in Beijing, Hubei, Liaoning, and Hebei according to historical process, the regulations and models of the Ming Tomb in Nanjing.

Ming tomb has a special status in the history of the development of the Chinese Mausoleum. Therefore, they have the reputation of “the first mausoleum of the Ming and Qing Dynasties”. Today, Ming Tomb (Ming Xiaoling Mausoleum) is still a famous and popular tourist sights in China. Many teachers would recommend and parents would choose here as the must-visit places when they taught history to their students or children. 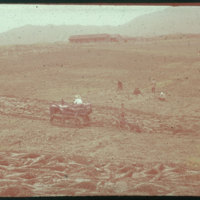 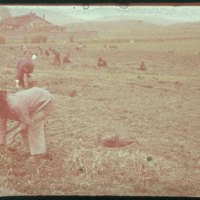 October is the harvest season and that is why farmers in the fields looked busy and tired. Also, it obviously shows that the agriculture of China was not developed well since World War II had just ended three years before. The farmers were using handmade tools. 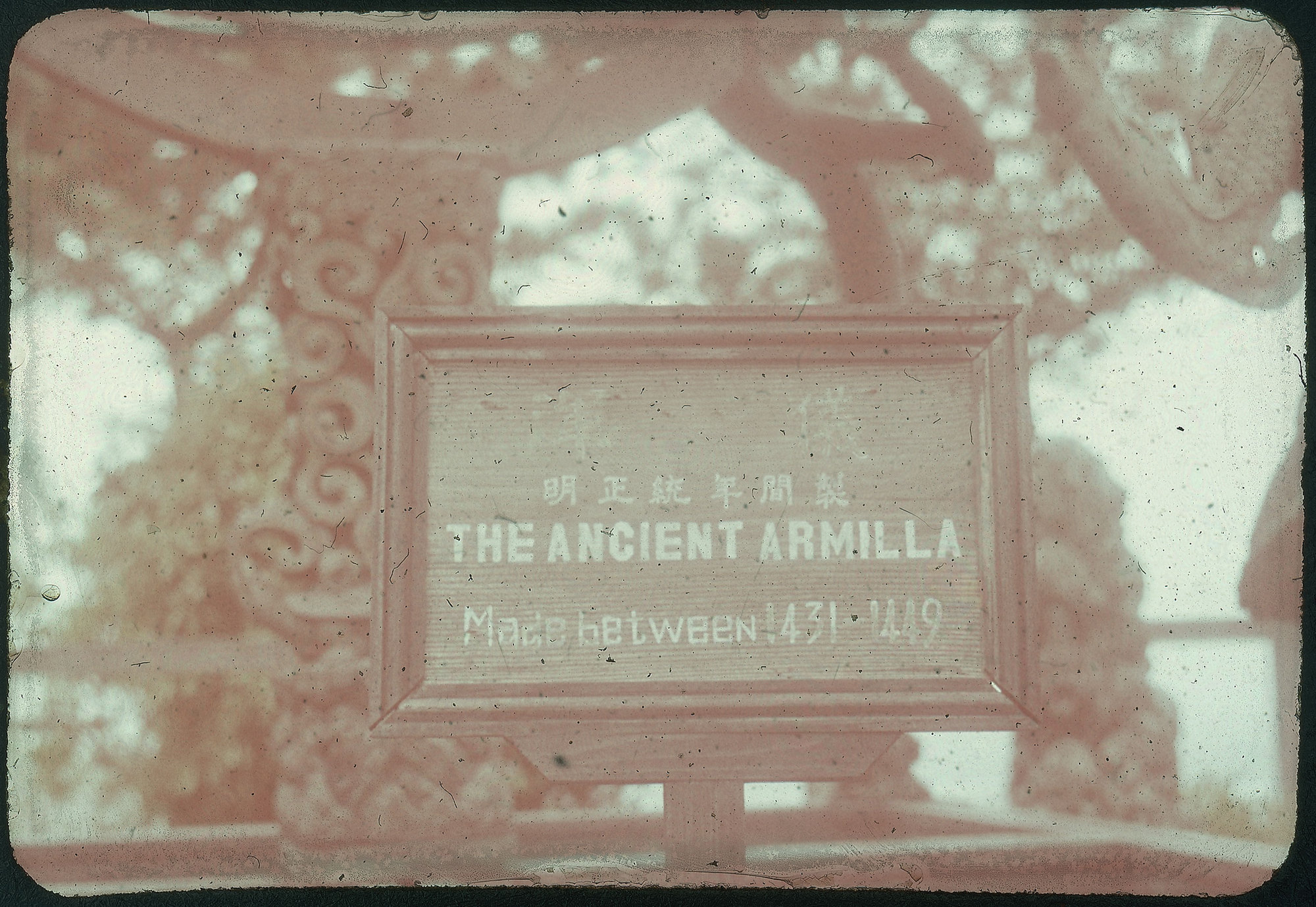 Hiller 09-070: A introduction sign of The Ancient Armillary in Nanking 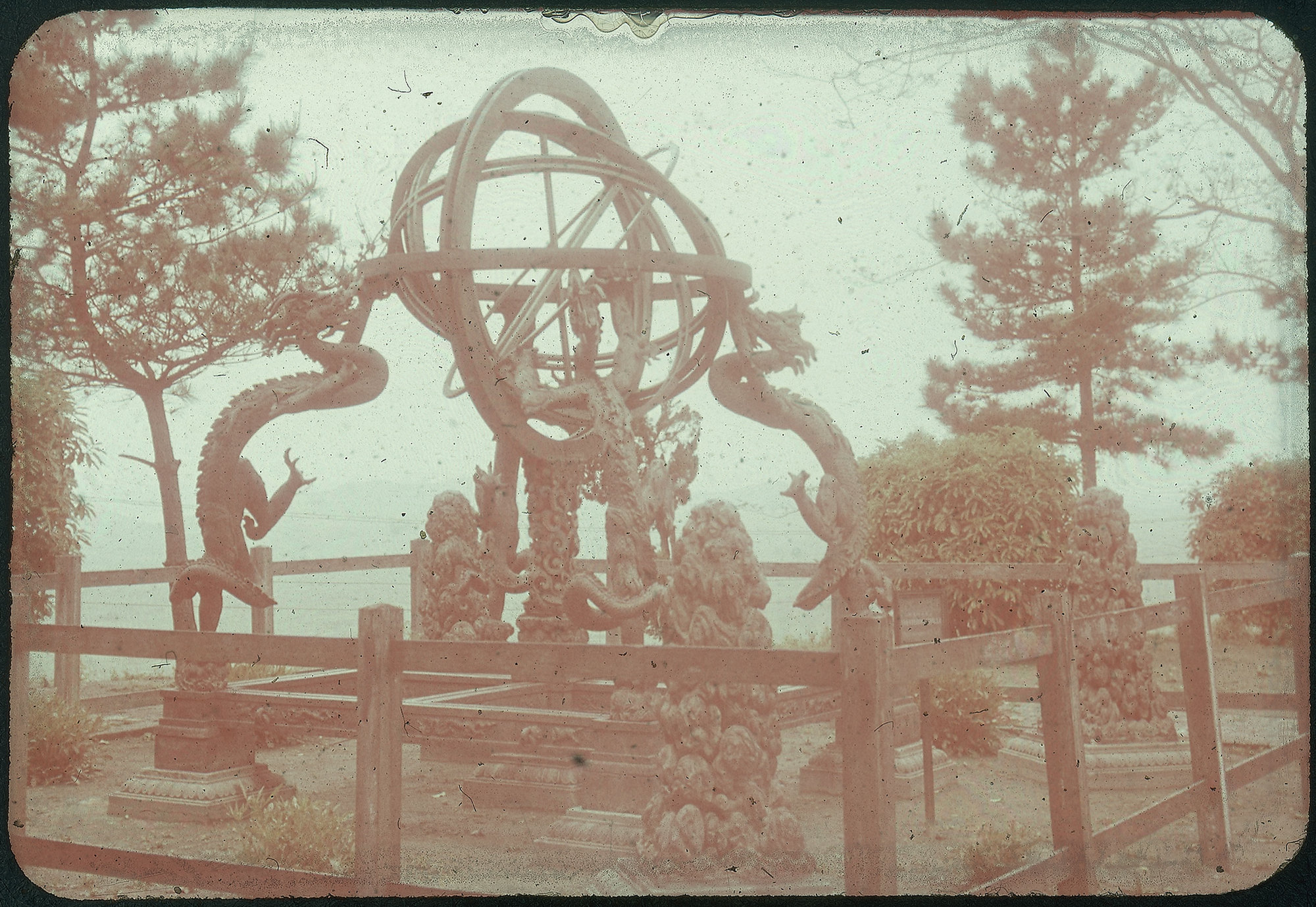 There is another different of view of Nanking when Mr. Hiller arrived at Purple Mountain Observatory.

Purple Mountain Observatory is located on the Purple Mountain in Xuanwu District of Nakjing which is the first modern astronomical research institution established by the Chinese. It is well-known as the “Cradle of Modern Chinese astronomy”.

There are some valuable things in Purple Mountain Observatory such as Armillary sphere (浑儀), which was made between 1431-1449, Ming Dynasty.

Mr. Hiller's sight-seeing in Nanking is valuable and meaningful not only for himself, but also because he went to the most popular and important sights which are significant to China from the feudal period to modern times.

Everyone goes their places for some reasons, Mr. Hiller took a series photographs for Nanking and donated to our Special Collections and Rare Books as the best evidences for China and himself though we have never had a chance to know in detail why he went to these places. Anyway, it is honored for all of us to see, to feel, and to research these Nanking photographs between 1945 to 1948 in China.