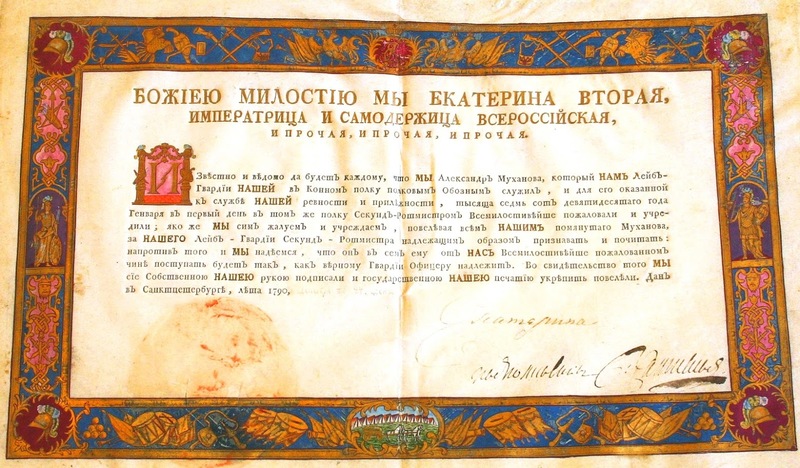 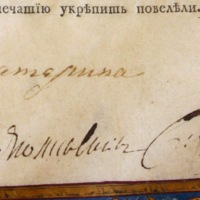 Literal Translation of the Charter:

By the Grace of God, We, Catherine the Second, Empress and Autocratrix of All the Russians, &c, &c, &c.

Let it be known and recognized by all that as of the first day of the month of January, in the year of Our Lord one thousand-seven hundred-and-ninetieth, We have Most Graciously bestowed and conferred upon Aleksandr Mukhanov who had served Us as regiment baggage-train driver in the Horse-Mounted regiment of Our Guards, and in acknowledgement of the zeal and diligence with which he disposed of his duty in Our service, — the rank of Lieutenant-Captain in the self-same regiment; and whereas We bestow and confer this upon him, commanding all Our men to pay the said Mukhanov the honors and respect befitting the rank of Our Lieutenant-Captain in the Guards, are accordingly trustful that in this rank, most Graciously granted him by Us, he will deport himself in a manner that behooves a loyal Officer of the Guards. In testimony thereof We have signed this with Our own Hand and commanded that it be confirmed by Our State Seal.

On the lower line there is a signature, by a different hand: Lieutenant-Colonel {Saltykov} of the Guards Horse Mounted Regiment.