150 Years of On the Origin of Species

Darwin's convincing arguments for natural selection as a mechanism for species divergence laid the foundation for additional work in evolutionary theory. The early twentieth-century rediscovery of the work of Moravian monastic Gregor Mendel regarding the inheritance of physical traits in pea plants and the attempt to reconcile it with Darwin's mechanism of natural selection became the focus of many of the finest scientific minds of the period.

The successful reconciliation of the two concepts led to what is commonly called the Modern Evolutionary Synthesis, a fruitful period of research and theory unification extending from the early 1930s through the 1950s. Some of the principal scientists who contributed significantly to the Modern Evolutionary Synthesis were Theodosius Dobzhansky, Ernst Mayr, George Gaylord Simpson, and Julian Huxley. 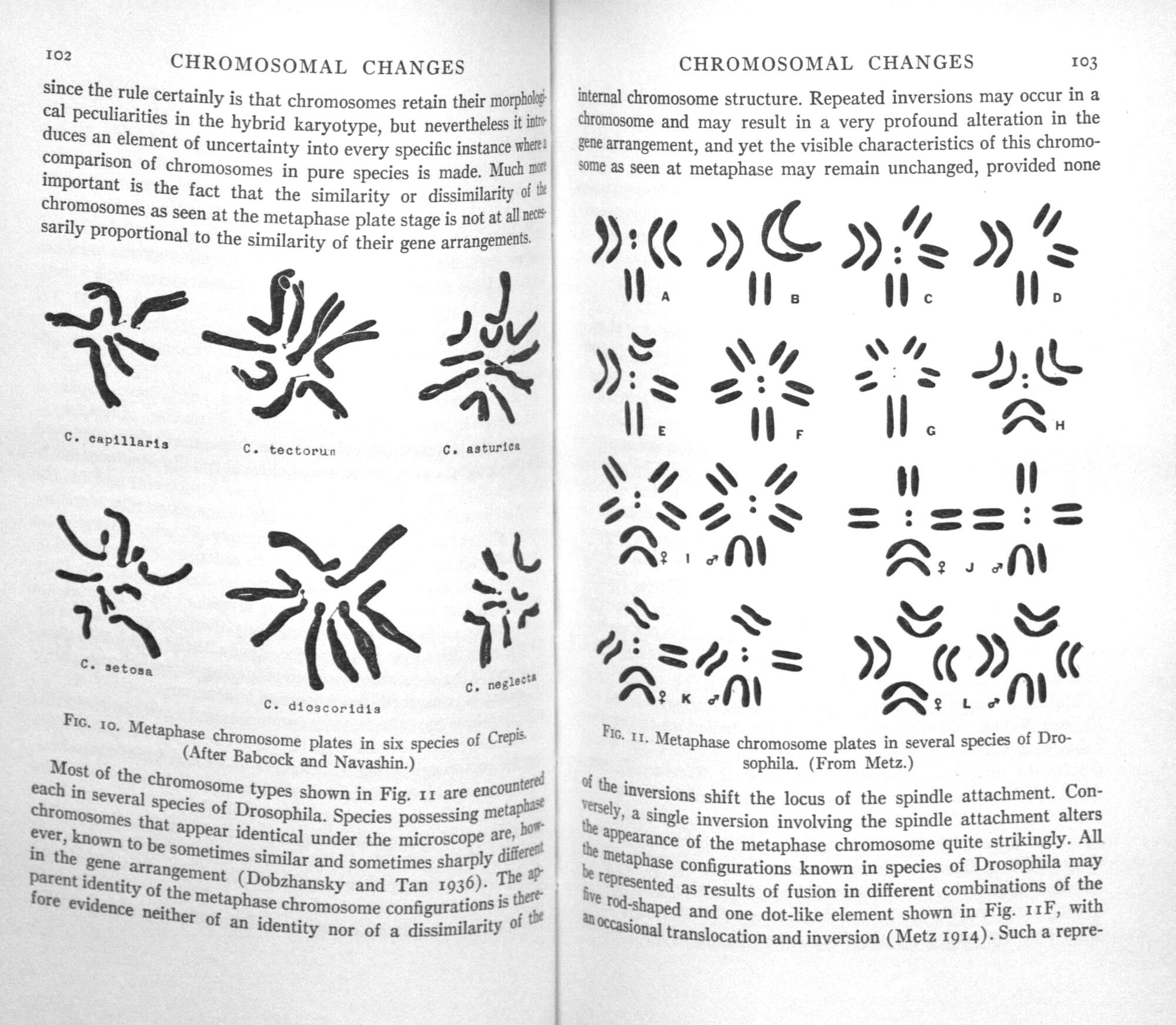 Theodosius Dobzhansky was a Ukrainian geneticist, evolutionary biologist, and a critical figure in formulating the modern evolutionary synthesis. When he immigrated to the United States from the Soviet Union in 1927, Dobzhansky worked with Thomas Hunt Morgan using the fruit fly, drosophila melanogaster, as a genetic model for inducing hereditary mutations through radiation. The idea that it is through mutations in genes that natural selection occurs was Dobzhansky's most important contribution to genetics and evolutionary biology.

In his 1937 book, Genetics and the Origin of Species, Dobzhansky strongly made the case for the reconciliation of evolutionary biology and genetics. A devoted believer in evolution and Darwin's theory of natural selection, Dobzhansky wrote a final scientific essay shortly before his death entitled, "Nothing in Biology Makes Sense Except in the Light of Evolution." 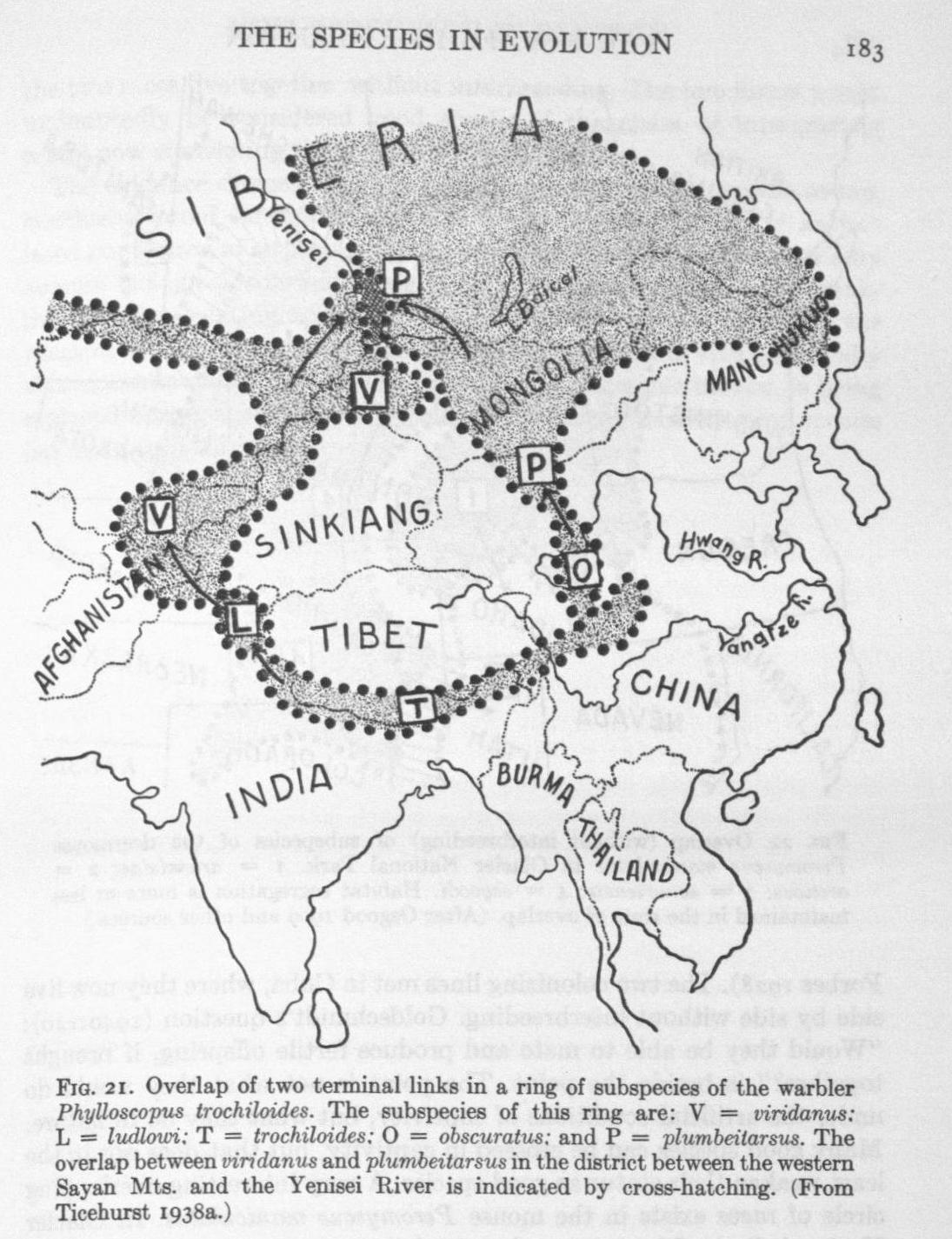 Ernst Mayr.
Systematics and the origin of species from the viewpoint of a zoologist
New York: Columbia University Press, 1942.

Ernst Mayr was a German taxonomist, ornithologist, and evolutionary biologist. His role in the modern evolutionary synthesis is based upon his refining the definition of "species" from a member of a structurally or morphologically similar group to a population that can breed only among itself. This new definition solved the species problem that had defied naturalists and biologists since before the time of Darwin and into the mid-twentieth century. Mayr believed that geographical isolation was the most important factor for the formation of new and individual species.

Mayr, in his 1942 book, Systematics and the Origin of Species from the Viewpoint of a Zoologist, theorized that the differences in organisms (finches among others) so readily apparent to Darwin in the Galapagos islands was due to small sub-populations isolated on individual islands undergoing rapid variance through the mechanisms of natural selection and evolving into new distinct species. 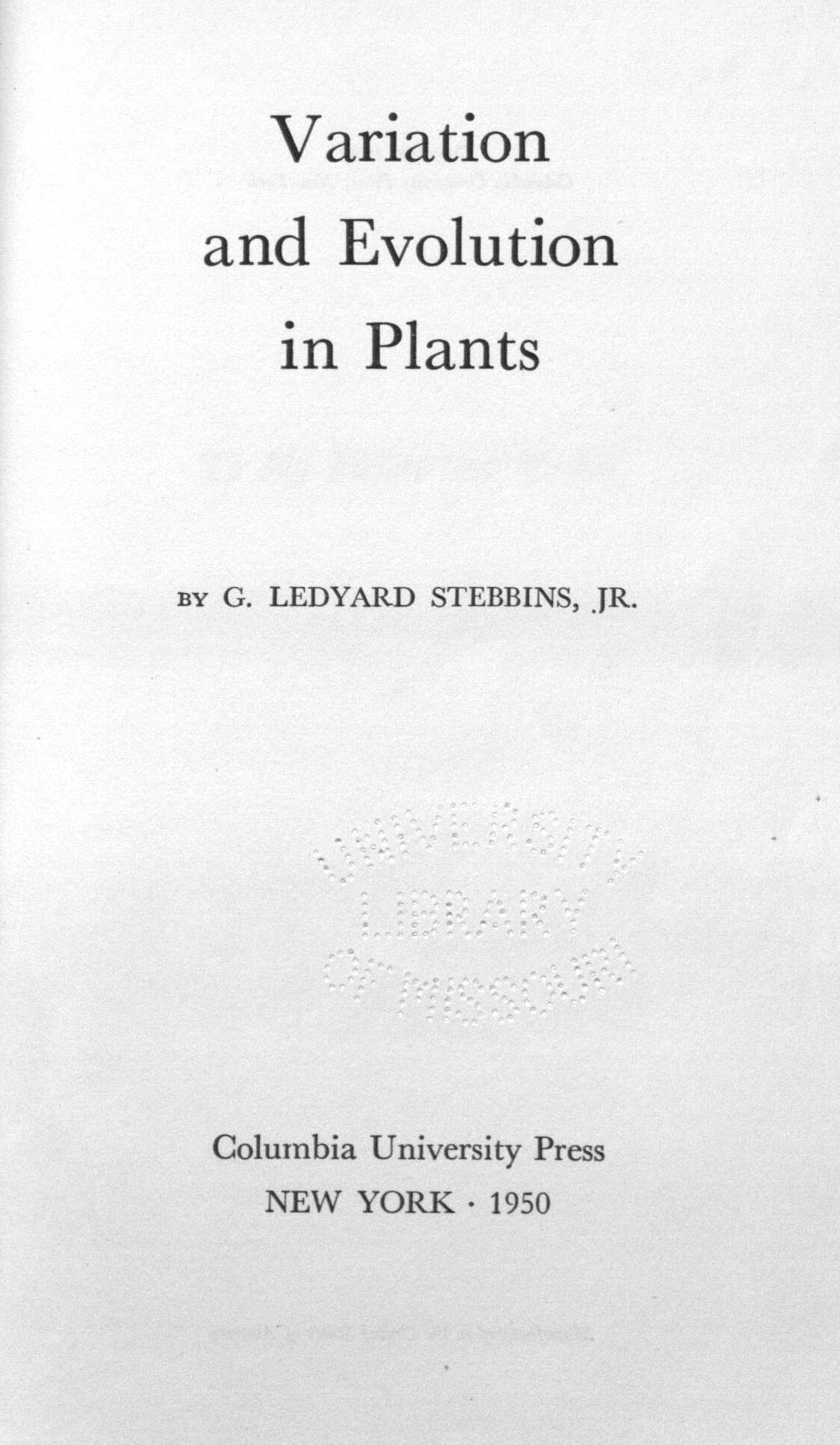 G. Ledyard Stebbins was an American botanist and geneticist broadly regarded as one of the foremost unifiers of the modern evolutionary synthesis. Variation and Evolution in Plants, published by Stebbins in 1950, helped to reconcile modern genetics and Darwinian natural selection for the purpose of explaining plant evolution. Variation and Evolution in Plants clarified the evolutionary mechanisms at work in plants at the genetic level. Although the volume contained, by the author's own admission, more synthesis than original research it widely influenced evolutionary biologists of the time and is still, after 60 years, an important book.

The book's place in the modern evolutionary synthesis is secured by its success in bringing plant evolution and animal evolution into a common model. The book also virtually eliminated any credible support for alternative evolutionary mechanisms in plants, such as Jean-Baptiste Lamarck's acquired characteristics or soft inheritance which were still defended by some plant scientists as late as the 1950s. 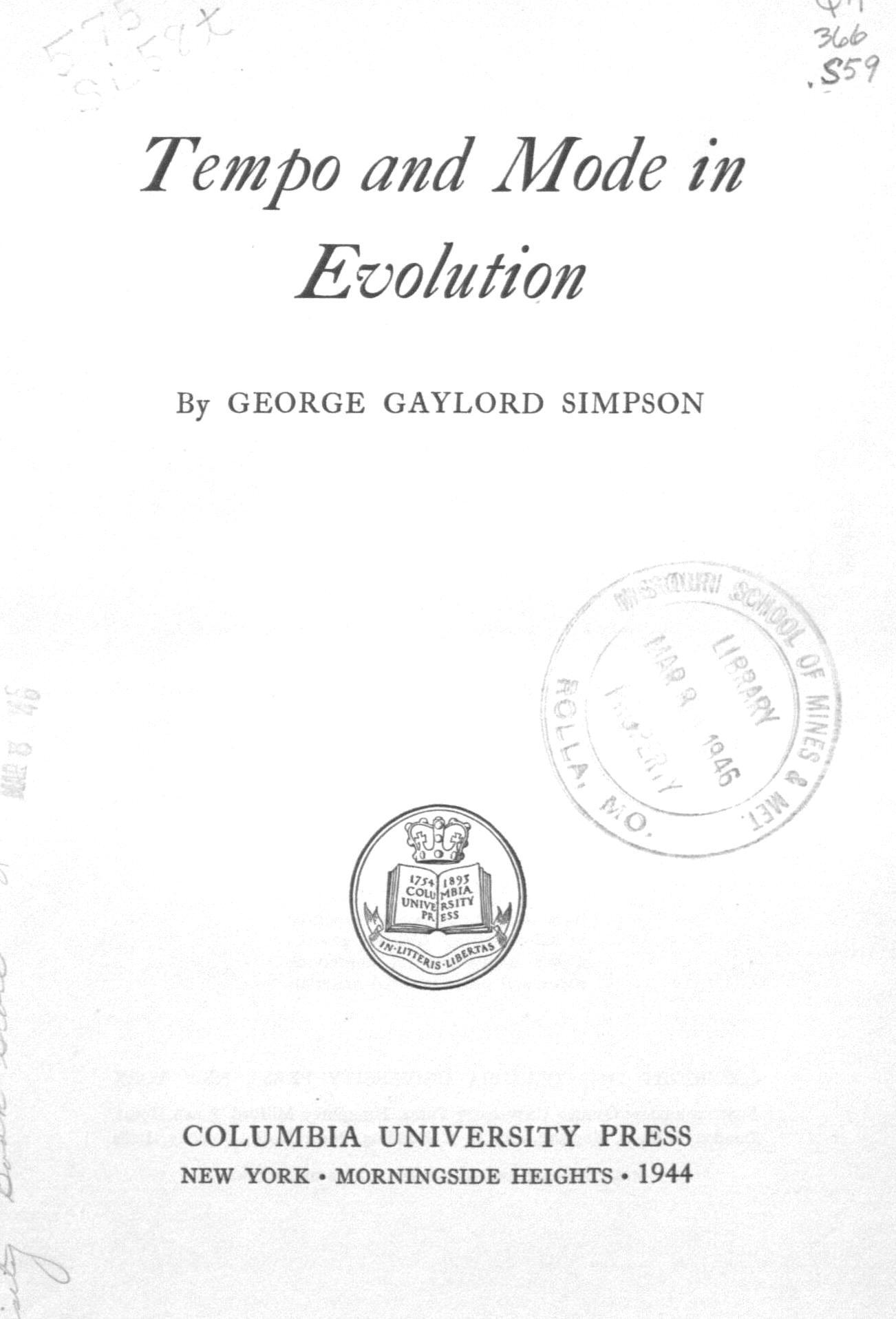 George Gaylord Simpson was an American paleontologist and the most influential practitioner of vertebrate paleontology of his time as well as a premier figure in the modern evolutionary synthesis. Simpson was an authority on extinct mammals and their migrations and viewed paleontology with its long timeline as a field well suited to the study of evolution.

In his major book published in 1944, Tempo and Mode in Evolution, Simpson divided evolutionary change into "tempo" (rates of change) and "mode" (manner or mechanism of change) with tempo a regulating factor of mode. Simpson's primary contention was that the fossil record clearly and inarguably supports Darwin's theory of natural selection. Natural selection is the mechanism acting randomly on variations in a population and it acts as the driving force behind evolutionary change. 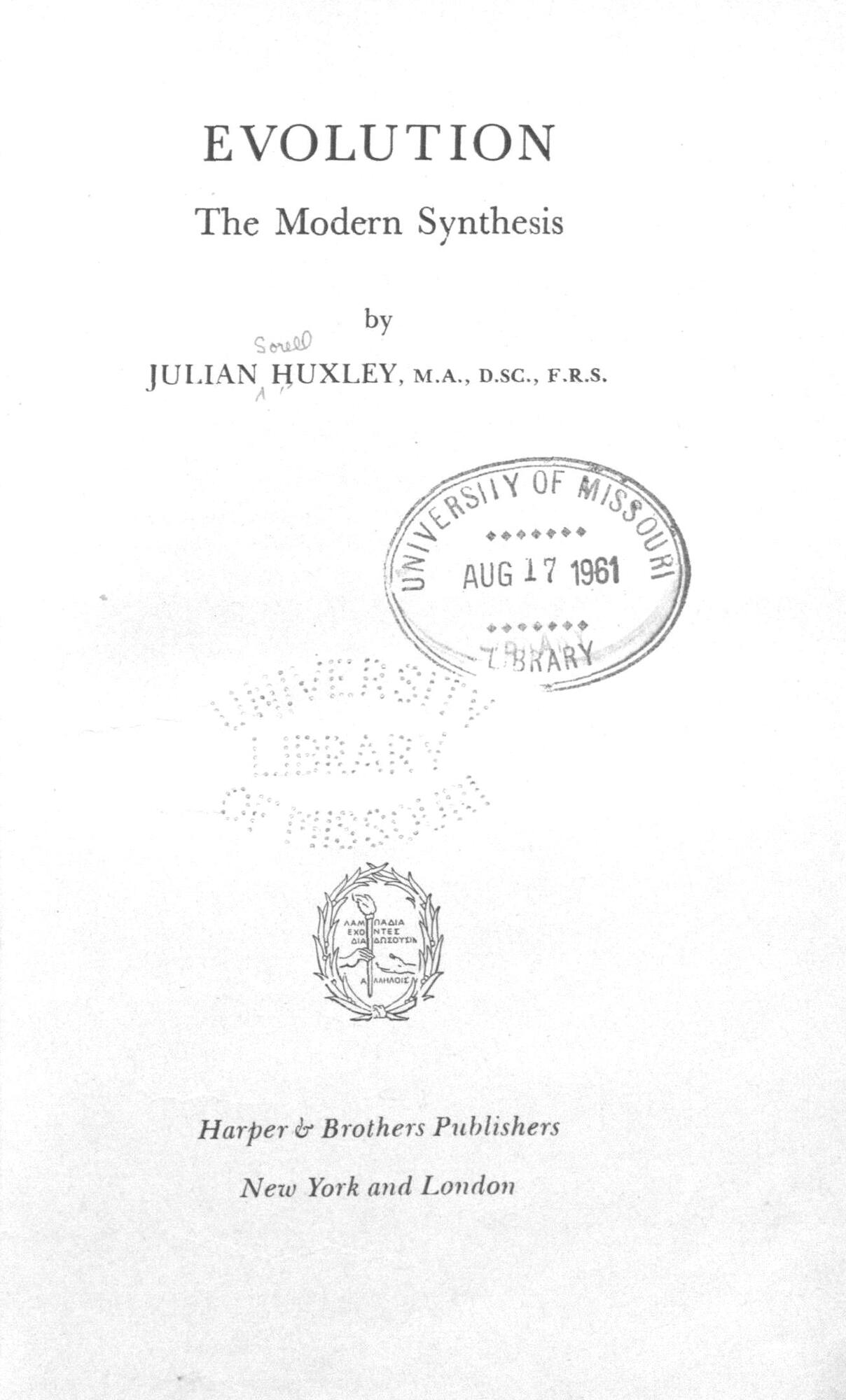 Julian Huxley was the grandson of T. H. Huxley, the friend and champion of Charles Darwin and his theory of natural selection. Julian Huxley was also an English evolutionary biologist, writer, and populizer of the life sciences. Furthermore he was one of the most articulate and outspoken proponents of natural selection and the modern evolutionary synthesis. Huxley's contributions to new scientific knowledge were not of great importance when compared with his work to synthesize scientific findings into general principles that could be clearly communicated to non-specialists. It was Huxley who coined the terms "the new synthesis" and "evolutionary synthesis" in his most well-known and influential book, Evolution: the Modern Synthesis (1942).

Darwinism had declined as a central principle of biology since the late nineteenth century with many biologists, especially those conducting research in genetics, abandoning natural selection as a primary mechanism in evolution. Huxley's book fashioned an updated version of Darwinism that embraced genetics and research findings from other life science disciplines. Huxley's greatest originality in formulating the new, evolutionary synthesis was his understanding and use of supporting arguments for the theory of natural selection that came from the new mathematically oriented population geneticists such as J. B. S. Haldane, R. A. Fisher, and Sewall Wright. 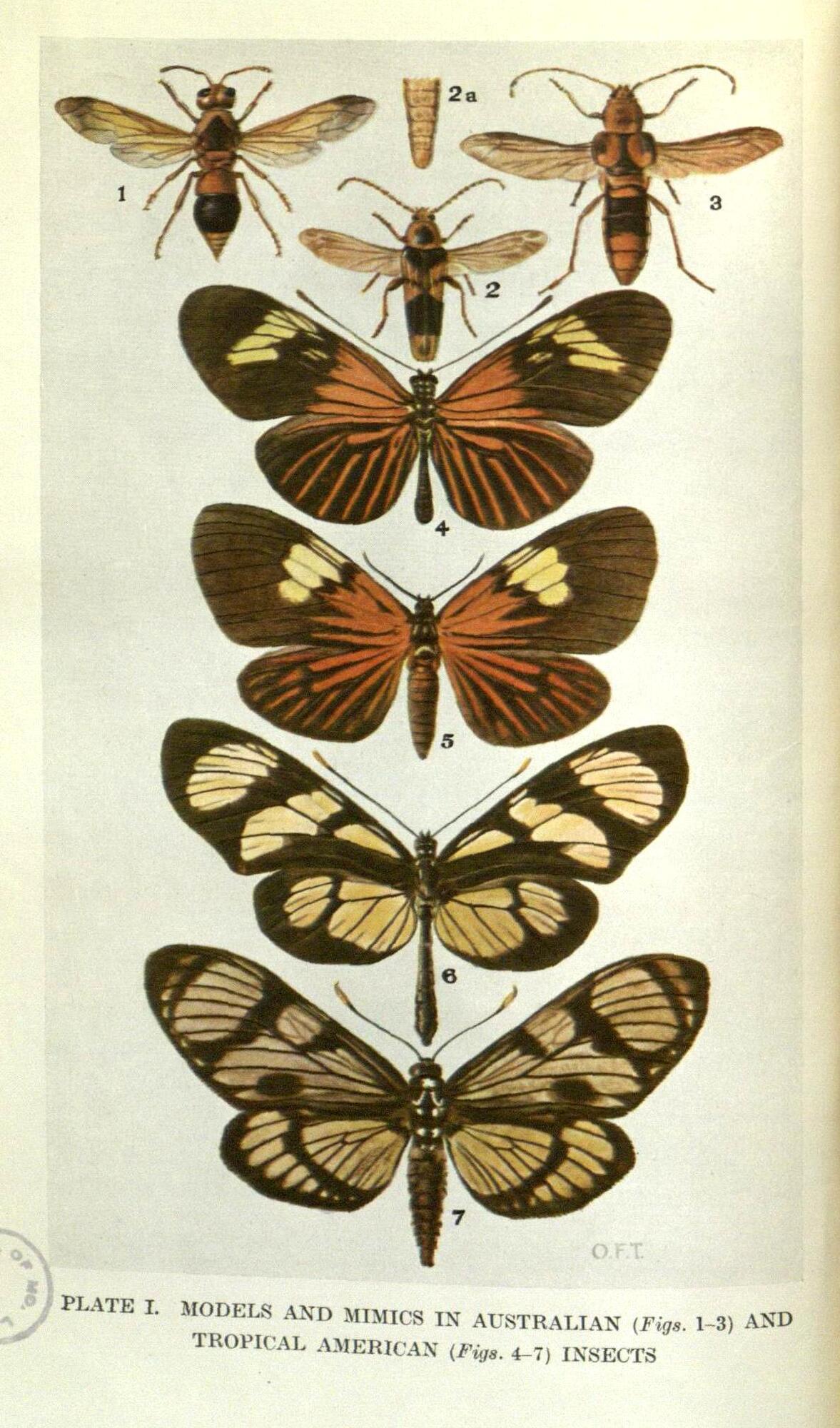 R. A. Fisher was a superb mathematician who made seminal contributions to evolutionary biology and was a pioneer in the statistical analysis of designed experiments. After graduating from Cambridge University in 1912 and upon failing the medical examination to allow him to serve in Great Britain's army during the First World War, Fisher worked as a statistician for the city of London and then the Rothamsted Experimental Station in Hertfordshire, England. His first book, Statistical Methods for Research Workers (1925), is still used by agricultural biologists. Fisher was knighted in 1952 for his contribution to English science.

The generation before Fisher had come to believe that Darwin's natural selection was an ineffective process of evolution because Darwin was wrong in supposing that the traits of parents were faithfully reproduced in their offspring. Rather, inheritance obeyed its own genetic laws, as discovered by Gregor Mendel in 1864.

The key for Fisher's reconciliation of natural selection and Mendelian inheritance was two-fold: mathematically distinguishing between variants that are genetically heritable from those that are not; and applying statistics to understand how multiple genes affect the heritable traits to produce the continuous array of variations found in nature. He is best-known among evolutionary biologists for his "fundamental theorem of natural selection." 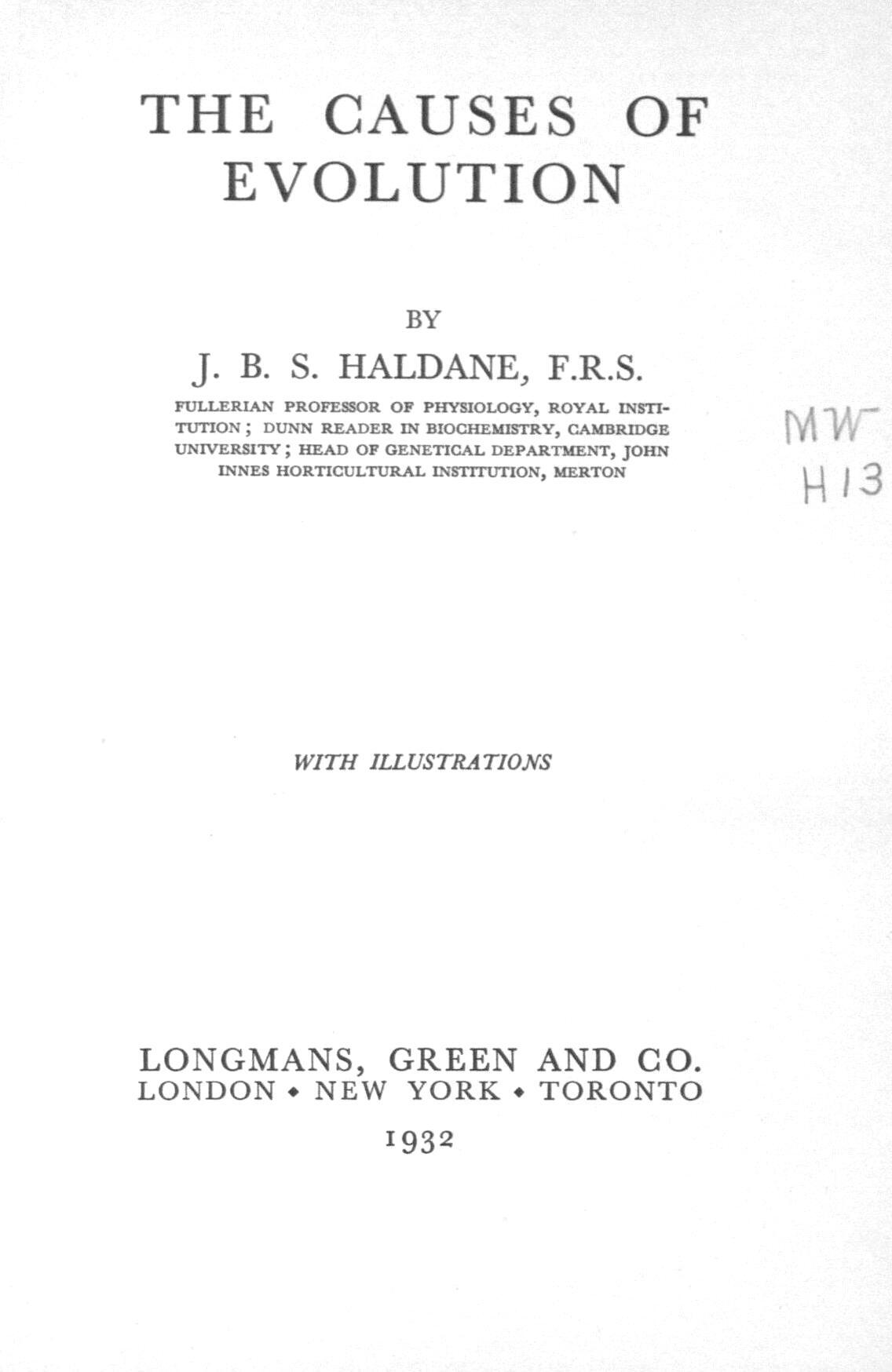 J. B. S. Haldane was one of the great polymaths of the twentieth century. He was an infantry officer in France during the First World War, an evolutionary theorist of profound influence, a biochemist, and an acclaimed writer of popular science and science fiction. He spent his later years in India where he eventually became a citizen. His great contribution to the Modern Synthesis, The Causes of Evolution, was widely read in part because of his skillful prose and forceful argumentation. Although mathematical at its core, Haldane tucked the mathematical proofs into the book's appendix.

Haldane's main thesis is that natural selection is the main cause of evolution. One might have thought that Charles Darwin proved just that seventy years prior. But, in Haldane's day, biologists were increasingly convinced that natural selection was ineffective because inheritance obeyed its own rules as discovered by Gregor Mendel in 1864. Whether or not a parent is to inherit a trait from its parents depends on the rules for genetic inheritance not, as Darwin thought, on whether the trait is selectively advantageous.

Haldane provided a quantitative account of how, in fact, those genetic varieties (transmitted according to Mendelian rules) that enjoyed a slight competitive advantage would after many generation predominate a population. This vindicated natural selection as a predominate cause of evolution. 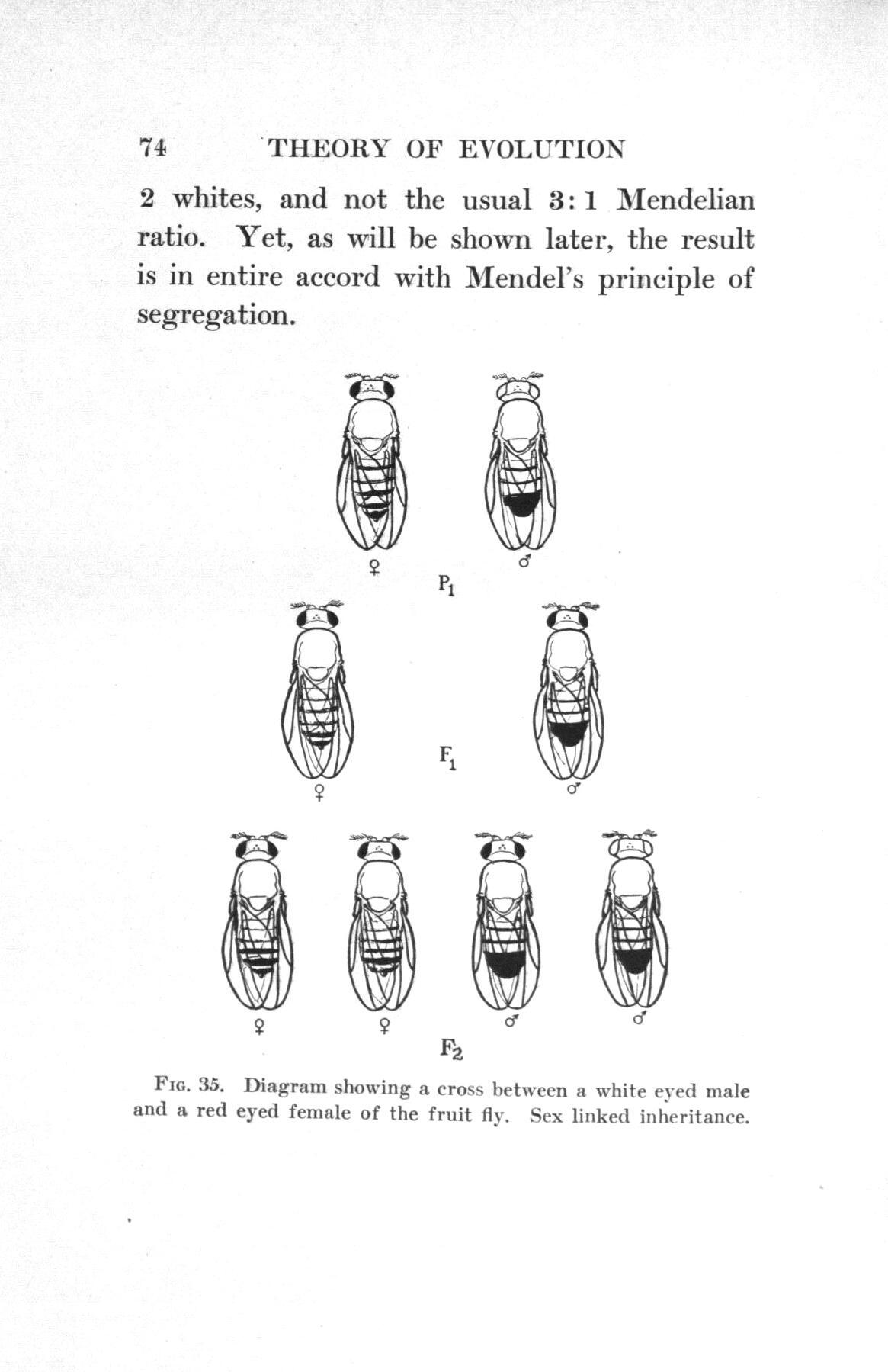 Thomas Hunt Morgan was an American embryologist and geneticist who was awarded the Nobel Prize in Physiology or Medicine in 1933, the first time the prize was presented for work in the field of genetics. His most important contribution to genetics and evolutionary biology was to demonstrate that actual individual genes are physically located on specific chromosomes in the nucleus of cells.

Morgan was initially doubtful of the physical reality of Gregor Mendel's units of inheritance, genes, and Charles Darwin's theory of natural selection. However, based on his work with fruit flies (drosophila melanogaster), Morgan became convinced of the compatible and complementary nature of Darwin's natural selection and Mendel's inheritance theory in transforming species. Morgan presented a series of lectures at Princeton University in 1916, later published as A Critique of the Theory of Evolution, which unified the Mendelian theory of inheritance and the Darwinian theory of natural selection. Morgan and his students at Columbia University are credited with establishing the "Mendelian-chromosome" theory. His pioneering work provided theory and tools for later geneticists and biologists to formulate the revised version of Darwin's theory of natural selection that became know as the Modern Evolutionary Synthesis. 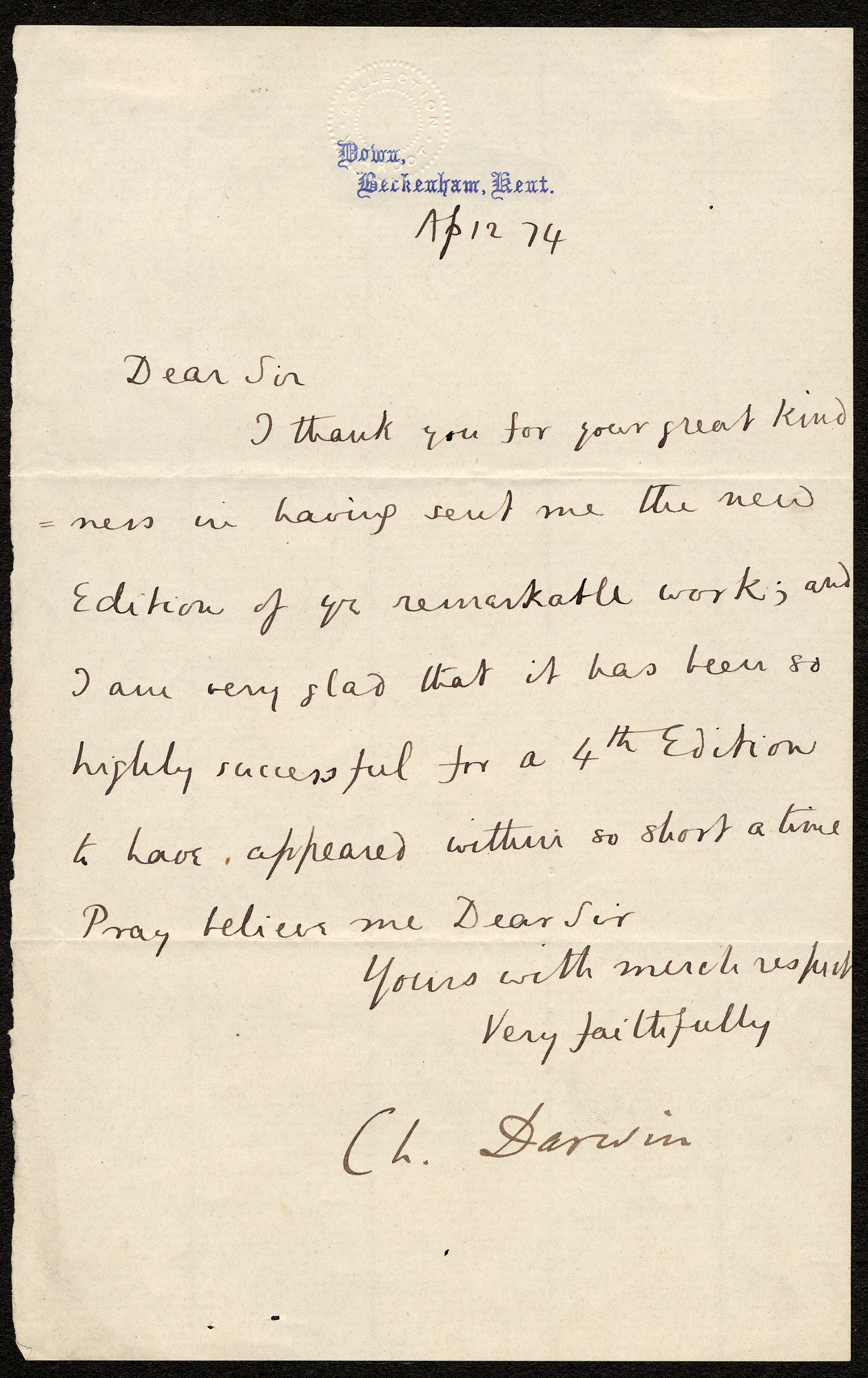 This letter from Charles Darwin is one of acknowledgement and gratitude to an unnamed correspondent. Some evidence indicates the letter was sent to Charles Lyell for the gift of a fourth edition of his The Geological Evidences of the Antiquity of Man.

The stationary is from Darwin's estate, Down House, in Kent. The signature "Ch. Darwin" and the handwriting of the body of the letter do not match and thus the note was likely written by an assistant for Darwin's signature. 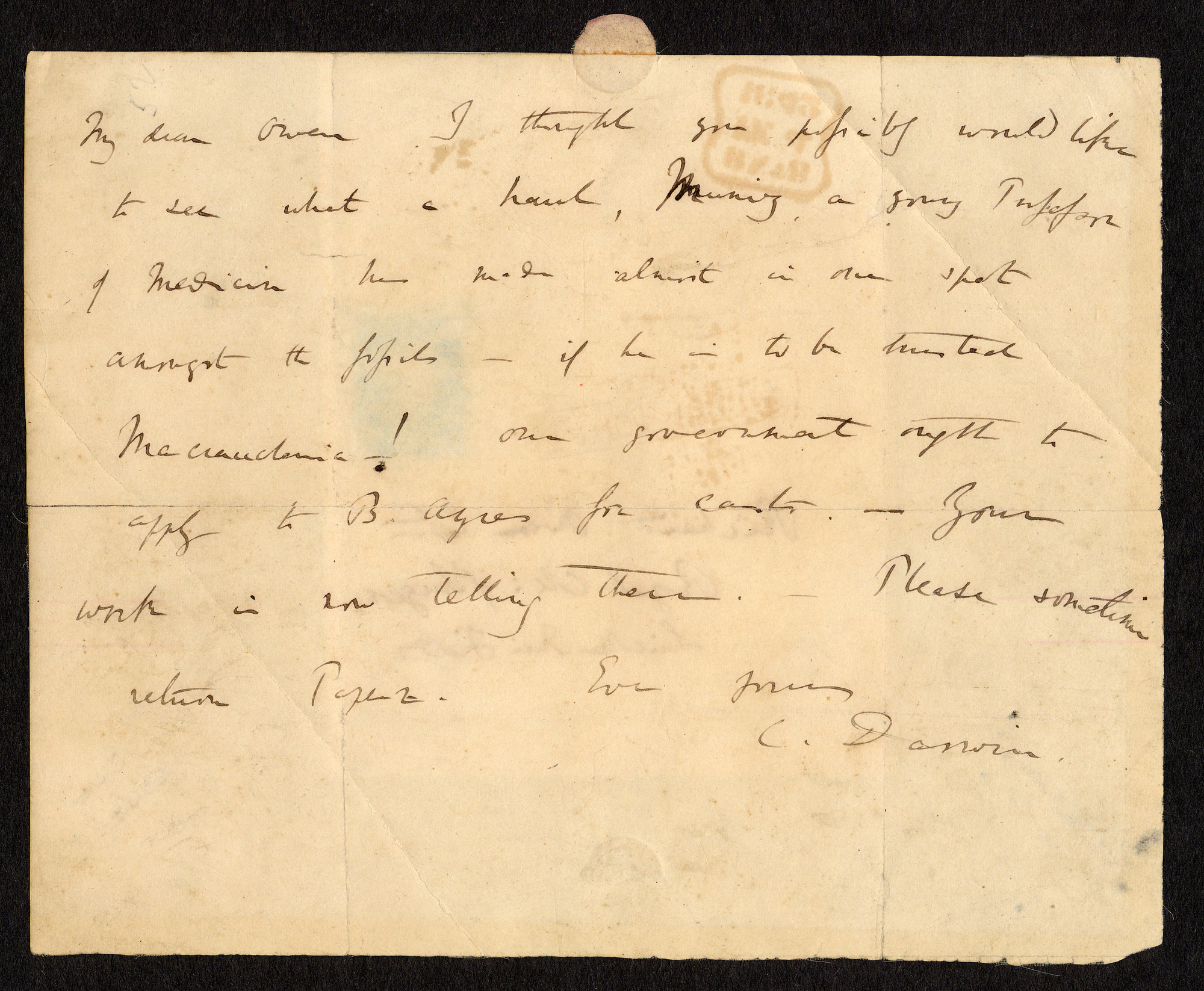 Sir Richard Owen was a British naturalist, comparative anatomist, paleontologist, and a vocal and constant critic of Charles Darwin's theory of natural selection. Darwin and Owen developed an uneasy and distrustful relationship after Owen published some scathing reviews of The Origin of Species.

Owen's most enduring legacy was championing and lobbying for the British Museum of Natural History in London. He was the first director of the museum upon its establishment in 1881.

This letter discusses the location of a rich fossil deposit in Argentina and Darwin urges Owen to seek support from the British government in this regard.