It would be an understatement to say that a lot has happened in the 180 years since the founding of the University. Below are a small selection of stories and events from the University's rich history. 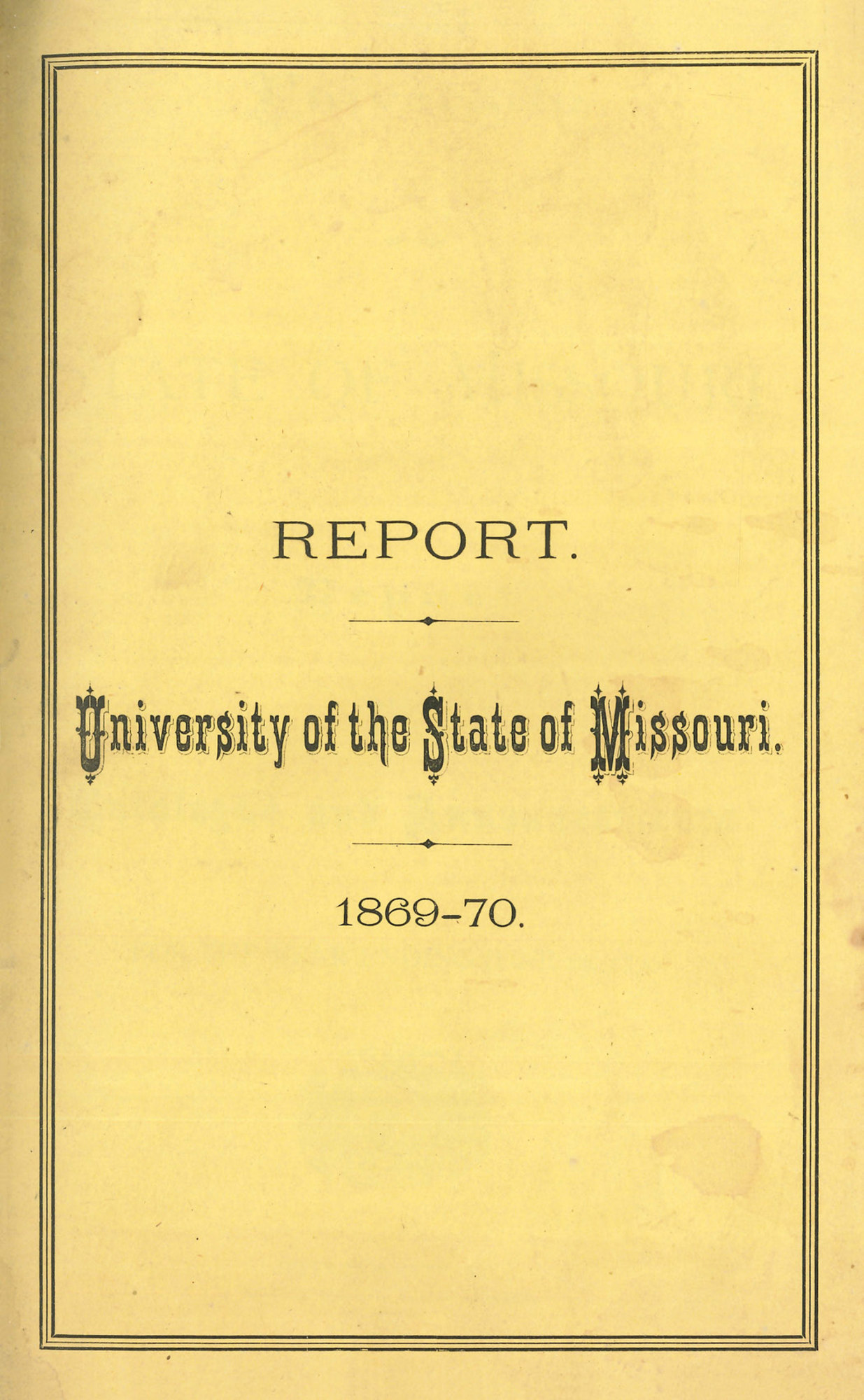 Beginning in 1870, after President Abraham Lincoln signed the Morrill Land-Grants Act, the then called University of the State of Missouri gained land-grant status. Also in the act was a section requiring annual reports be prepared regarding “progress of each college, recording any improvements and experiments made, with their cost and: results, and such other matters,” to the Secretary of the Interior. A Missouri state statute required that this report to be also delivered to the governor.

These reports, the “Annual report of the Curators of the University to the Governor of the State,” were published in the annual course catalogs from 1870 until the 1950s. Each report contains fascinating and insightful information about events and conditions at the university. This exhibit will highlight a number of reports that discuss significant events in the university’s history.

The first report, written on June 6, 1870, by James S. Rollins, the university’s first member of the Board of Curators and then President, is perhaps the shortest and does not contain much information. James S. Rollins also served in the Missouri Legislature and then two terms in the U.S. House of the Representatives during the Civil War. He was a strong unionist and advocate for the 13th amendment to the constitution, which abolished slavery. In 1866 and 1868 he again served in the Missouri Legislature and played an important role in growth and development of the university.

Image from: Report containing catalogue and announcements for the year ending June 29, 1870 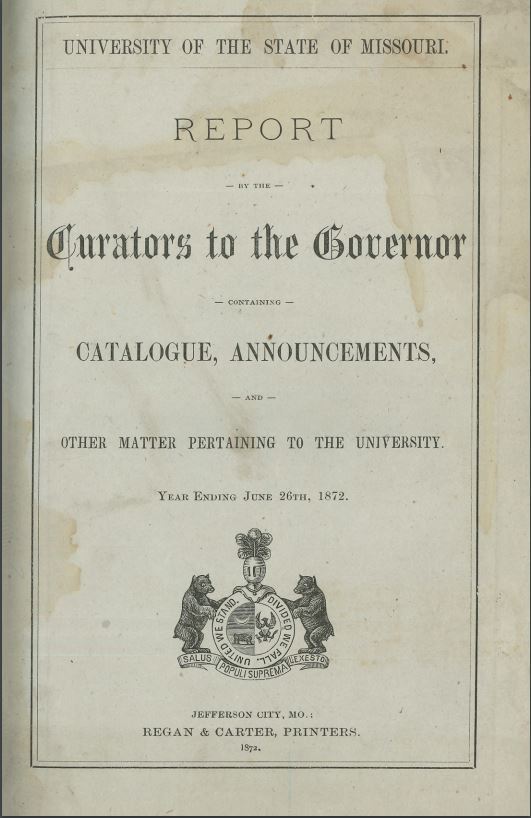 Starting in 1872, female students admitted to the University of the State of Missouri were no longer constrained to the Normal College and were free to choose any major they wanted.

“Here is a very interesting and instructive part of our University history. This measure seemed at first a very bold and hazardous one. It was not so done in the days of the monks, nor in the great Universities of Europe, whether British or Continental, nor in Harvard or Yale, nor even in Michigan, aggressive as she is upon time-honored uses and abuses. … By degrees, and carefully feeling our way, as though explosive material was all around us, we have come to admit them to all the classes in all the departments, just as young men are admitted.” – page 23-24, Report by the Curators to the Governor containing catalogue, announcements, and other matters pertaining to the university : year ending June 26th, 1872.

Image from: Report by the Curators to the Governor containing catalogue, announcements, and other matters pertaining to the university : year ending June 26th, 1872 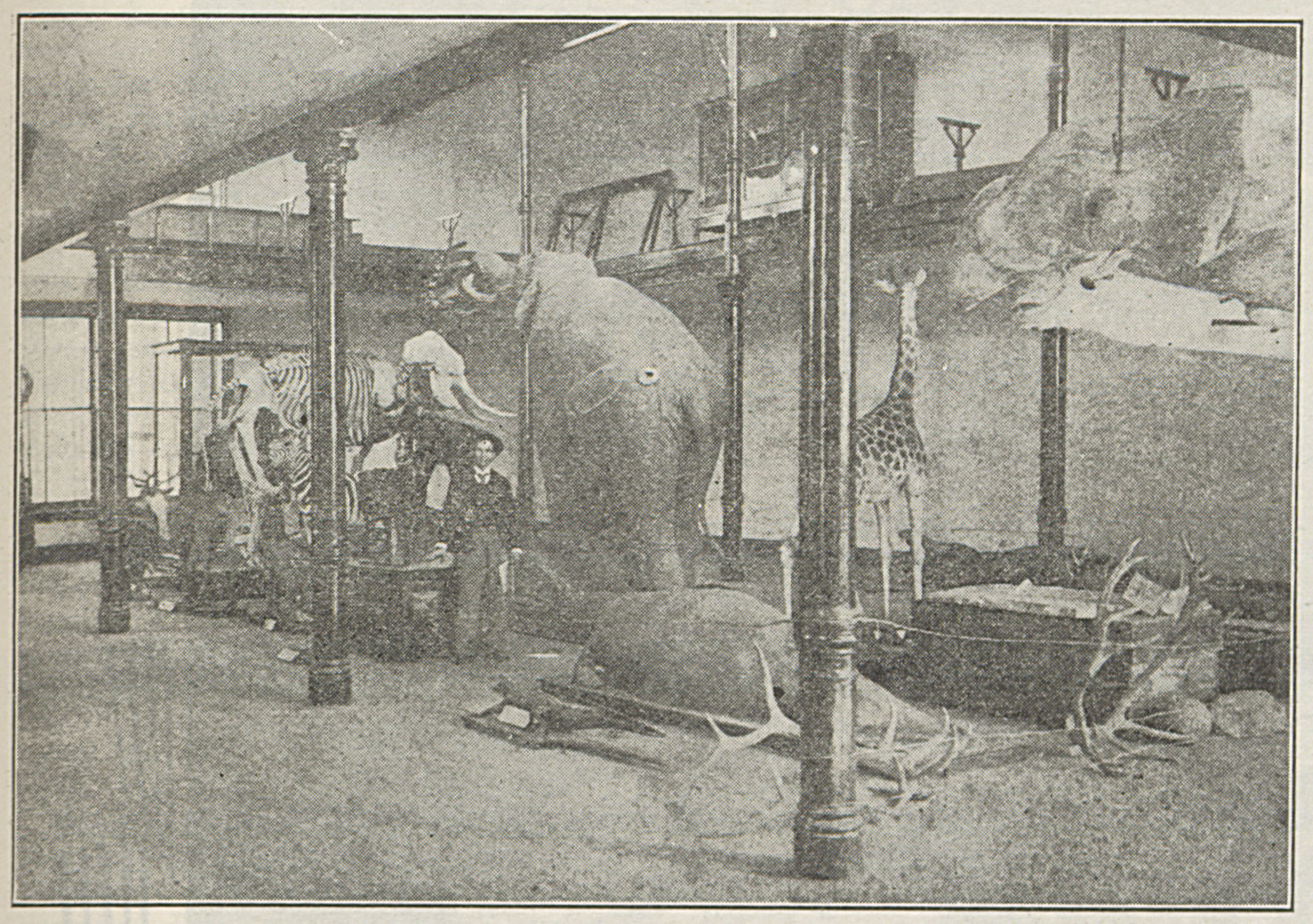 Did you know that the University of Missouri at one point had the remains of an Indian Elephant? The elephant, named Emperor, was purchased from a Kansas City circus after its death in the mid-1880s. The elephant was mounted in the natural history museum within Academic Hall until fire destroyed the building in 1892.

Thankfully, as quoted in the 1892 annual report to the Governor, Emperor was saved: "The fine cases and specimens on the second and third floors of the museum were lost in the fire ... large specimens on the first floor were saved by taking them out through an opening made in the wall for the purpose. The elephant was thus saved, though somewhat damaged."

This photograph, from the December 1931 edition of the Missouri Alumnus, was taken in 1889 and shows a portion of the natural history exhibits that appeared in Academic Hall before it burnt. Emperor is visible at center and the skeleton of the same animal is just to its left. 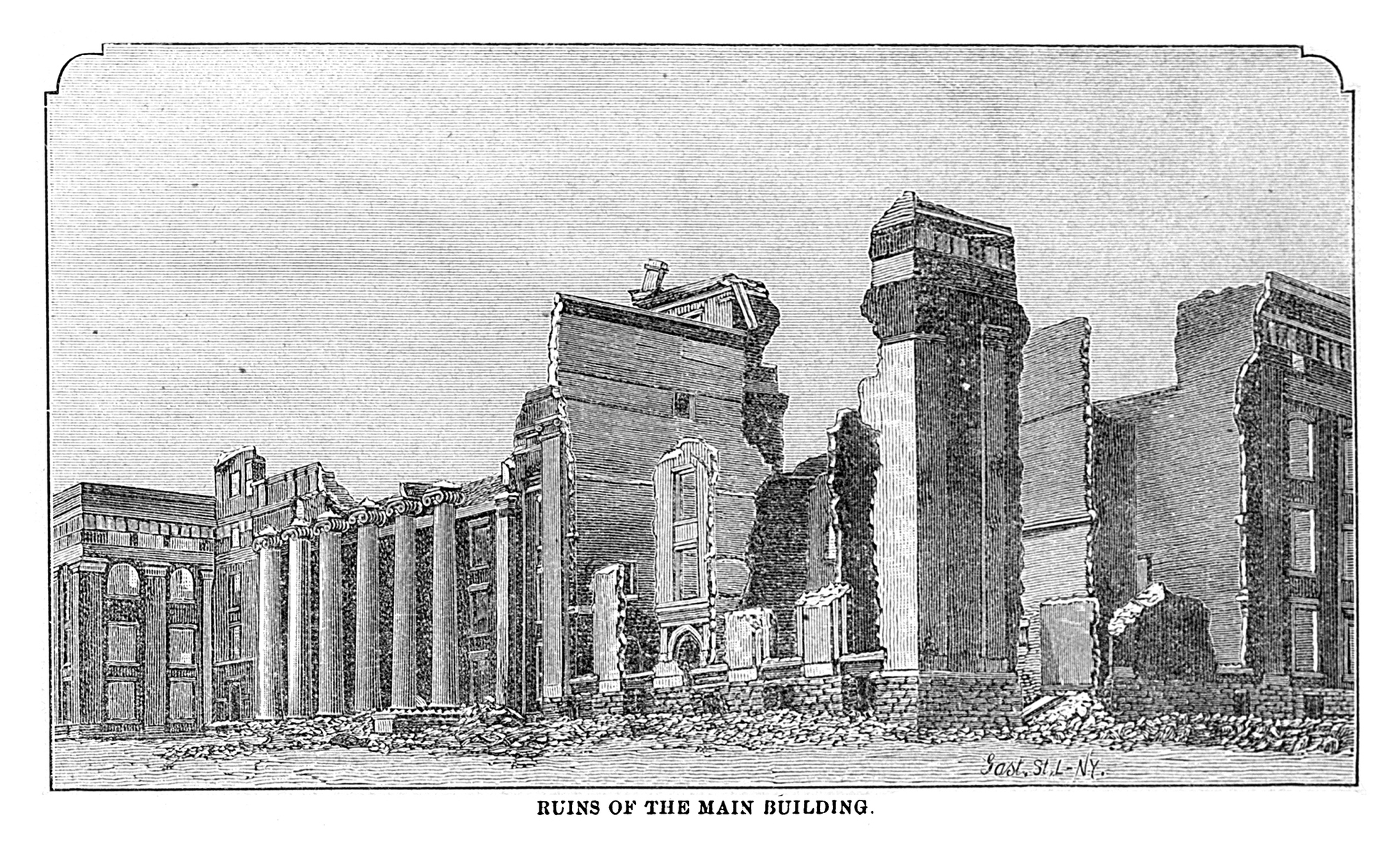 1892: The burning of Academic Hall

Academic Hall burnt on January 9, 1892, a result of electrical fire. The report that appears in the 1892 catalog was written only a few months later. It contains practical information, such as how much was paid out in insurance ($146,500), what was lost and what was not (“the elephant [in the museum] was saved, though somewhat damaged”), and preliminary plans for a new main building once funds were raised.
The columns were also discussed:

“In front of the main building, eighteen feet from the wall line, stood six stone columns on a raised platform, and supporting the portico. … They are of the Ionic order or architecture, massive and simple. The heat from the burning building so affected them that they are now scaling deeply on the side that was nearest to the fire, giving them the character of a ruin, and telling in silent eloquence the story of the sorrow that befell them on January 9, 1892, when the flames destroyed the grand structure to which they were mated and left then standing alone. They are now the only memento upon the campus of the old University building, which was erected over fifty years ago, and preserve in their scarred and crumbling magnificence the one feature by which the long line of students that have passed out from these scenes can recall the likeness of their Alma Mater.

Few hearts did not bend and few eyes did not moisten at the knowledge of this irreparable loss. For it is manly to feel deeply, and tenderness is a badge of nobility. Let these columns stand. Let them stand a thousand years. Crown them with an arch, memorial to the men who in their magnificent presence learned what life and duty are, and how to live the one and do the other. They will be to all a rallying point of future devotion and service to the University. … [New students] will walk up the broad aisle where their elder brothers walked, and, through these columns, bereaved of their former glory and tortured into ruins by fire, they will behold the new University, a nobler structure, with its associate buildings arranged on either side, the whole In proportion and on a scale worthy the expanded power and wealth and in fitting correspondence to the Increasing dignity of the State.” – Pages 26-27.

Image from: Catalogue of the University of the State of Missouri, 1892

For more information about the events surrounding the growth and development of the University of Missouri, we invite you explore the entire collection of MU course catalogs in MOspace.