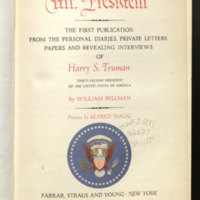 Mr. President : the first publication from the personal…

Signed by Harry Truman and William Hillman to the School of Journalism, U of Missouri.

Harry Truman was the 33rd President of the United States, an American politician of the Democratic Party
Hillman, William, 1895-Journalist and news commentator; editor of Mr. President (1952); assistant to Harry S. Truman in various writing projects, including Truman's Memoirs (1955-56) and Mr. Citizen (1960).