Mary McClelland Lago (1919-2001) was on the University of Missouri Department of English faculty from 1977 to 1991. From 1989 until her retirement she held the endowed professorship, the Catherine Paine Middlebush Chair of English. Biographical Passages: Essays on Victorian and Modernist Biography Honoring Mary M. Lago (University of Missouri Press, 2000) describes her as a distinguished biographer, editor, translator, and scholar of Victorian and Edwardian literature. Her research interests included the intersection of British and Indian literature at the turn of the century and the Edwardian art scene.

Mary McClelland was born in Pittsburgh, Pennsylvania and received her B.A. in English from Bucknell University in 1940. She moved to New York and worked for the Friendship Press. While in New York she became involved with the Cantata Singers and the Dessoff Choir and met her future husband, Gladwyn V. Lago. They moved to Columbia, Missouri, where Gladwyn Lago assumed a faculty position in the Engineering School. While raising their two children, Mary Lago organized the Bach Singers where she was introduced to the Bengali poet Rabindranath Tagore. Lago eventually returned to school and earned her M.A. (1965) and PhD (1969) from the University of Missouri. After teaching as an instructor in the department from 1971-1977, she was appointed Associate Professor in 1977, full Professor in 1979, and named Professor Emerita in 1991. Lago died from cancer in 2001.

Professor Lago was an authority on Rabindranath Tagore and E. M. Forster and wrote several books on each. She translated Tagore's works and was the author of numerous articles and reviews. Additionally, she wrote books on William Rothenstein, Max Beerbohm, Edward Burne-Jones, and Christiana Herringham. Her most recent book, India's Prisoner: A Biography of Edward John Thompson, 1886-1946, was published shortly before her death. She bequeathed her extensive collection of manuscripts and books to the MU Libraries in 2001.

The massive correspondence of E. M. Forster, which Professor Lago gathered from archives all over the world, is one of the prominent features of the collection, with over 15,000 letters. It was assembled in preparation for an edition of selected letters that she edited in collaboration with P. N. Furbank, Forster’s authorized biographer. A similar archive of Forster letters has been deposited in King's College.

The collection is supplemented by extensive files related to each of her books, proof copies of these books, and files related to her academic career, honors, awards, and memorabilia. Personal material includes her journals and diaries that depict the tenuous position of a woman in the male-dominated profession of the early seventies. The book collection fully supports research in Edwardian and Victorian literature and also contains a representative selection of recent Bengali literature.

The books in the collection have been cataloged and are now available through the MERLIN collection level heading Mary Lago Collection (University of Missouri–Columbia. Libraries), the University's online catalog. A folder level inventory to the manuscripts and correspondence is also available.

Copyright on all correspondence resides with the originator. Correspondence in the collection not written by Mary Lago may be consulted but not photocopied or published without permission from the copyright holder. 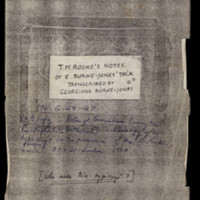 Household stories from the collection of the brothers Grimm / tr. from the German by Lucy Crane, with illustrations by Walter Crane. 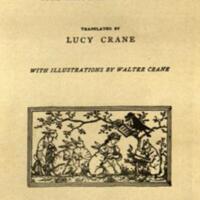