Lanford Wilson (1937-2011) was born in Lebanon Missouri to Ralph and Violetta Tate Wilson. In 1942 his parents divorced, and he and his mother moved to Springfield, Missouri, where she took a job in a garment factory. When Wilson was 11 years old his mother married Walt E. Lenhard, a farmer from Ozark, Missouri. Wilson lived in Ozark until he graduated from Ozark High School in 1955. He enrolled for summer and fall sessions at Southwest Missouri State College in Springfield. The following year Lanford moved to San Diego, California, to live with his biological father. While in San Diego, Wilson worked in an airplane manufacturing plant and enrolled in San Diego State College where he took courses in art and art history.

In 1957 Wilson moved to Chicago and worked as a graphic artist for an advertising agency. It was in Chicago that Wilson realized that the short stories he had been writing for years actually worked better in play form. While in Chicago, Wilson enrolled in an extension class in playwriting at the University of Chicago. In part due to a lack of live theatre opportunities in Chicago, Wilson relocated to New York City in July 1962.

While in New York working odd jobs to support himself, Wilson became familiar with Caffe Cino, a pioneering Off-Off Broadway theater run by Joe Cino that produced plays by many young, would-be playwrights. In August of 1963, his short one-act play, So Long at the Fair, was produced at the Caffe Cino. He soon became one of the regular playwrights working out of the Caffe Cino, writing many one act plays for performance at the playhouse. Caffe Cino premiered The Madness of Lady Bright in 1964 and was one of the playhouse's significant successes. He also produced longer works for another playhouse, La MaMa Experimental Theater Club, in 1965. It was while having his play, Home Free!, performed at Caffe Cino that Wilson met a young director named Marshall Mason. Mason and Wilson formed a professional collaboration and friendship; Mason would go on to direct a large number of Wilson's plays throughout his career.

In 1968 Wilson had his play, The Gingham Dog, premiere in a regional theatre, the Washington Theater Club, and the following year the play opened on Broadway. In 1969 the Circle Repertory Company was organized by Wilson and three of his theater associates: Tanya Berezin, Marshall Mason and Rob Thirkield. For almost two decades the Circle Repertory Company was the place where many of Wilson's most critically acclaimed and successful plays were premiered, including Talley's Folly, Serenading Louie, The Mound Builders, Fifth of July, and The Hot l Baltimore. The Hot l Baltimore was the Circle Repertory Company's first significant success, running for over a thousand performances in 1973 and winning the New York Drama Critics Circle Award for Best American Play and an Obie Award.

A number of Wilson's plays moved from either the Circle Repertory Company or regional theater companies to Broadway. His plays were nominated for Tony awards three times, and in 1980 he received the Pulitzer Prize for Talley's Folly. Wilson was elected to the Theatre Hall of Fame in 2001 and to the American Academy of Arts and Letters in 2004.

In addition to writing plays, Wilson wrote librettos for several twentieth century operas. He wrote the libretto for Lee Hoiby's opera, Summer and Smoke, which was adapted from Tennessee Williams' play of the same name in 1971. Wilson was the librettist for the adaptation at the request of Williams. Wilson also adapted his play This is the Rill Speaking into a one-act chamber opera. In 1984, Wilson adapted Anton Chekhov's Play Three Sisters for the Hartford Stage Company. The adaptation centered on making the existing translations more theatrically and linguistically modern.

Wilson maintained an apartment in Manhattan for many years where he resided when there was a play in production; however, from 1971 until his death in 2011, Wilson lived mostly in an 1845 farmhouse on Long Island. In his Sag Harbor home, he devoted much time to developing his garden and collecting art.

This collection contains personal and professional papers created and received by Lanford Wilson throughout his life and career as a playwright. The vast majority of the collection consists of manuscripts in various forms but especially in the form of plays. In addition to his works there is also a sizeable series of plays sent to Wilson by his colleagues and friends. There are also files of reviews and promotional clippings for productions of his plays. Correspondence received by and created by Wilson dating from the early 1960s until his death in 2011 also forms part of this collection, as do photographs of both a professional and family nature. In addition, the collection contains early family materials from his childhood and records of his personal interests such as gardening and art collecting.

Electronic documents that were recoverable from Wilson's 3.5 inch diskettes were printed on acid-free and buffered paper and integrated into other records series and sub-series. The diskettes have been retained for research purposes.

The books in the collection have been cataloged and are now available through the MERLIN collection level Lanford Wilson Collection (University of Missouri Libraries, the University's online catalog. For manuscript and duplicated materials, a folder level inventory is available.

This Collection is divided into eight series.

Series Three – Works and Manuscripts contains the writings of Wilson from his days as a student to his later plays.
Series Three is further divided into three Sub-Series:

Series Four – Other People's Works consists of copies of scripts and other writings that were sent to and retained by Wilson dating from the 1960s to 2009. The works are arranged alphabetically by the last name of the author of the work. Some authors sent Wilson several titles and some have been hand-annotated by the authors. Many of the manuscripts are not dated and some are unattributed.

Series Six – Awards and Other Three-dimensional Objects consists of various awards and honors received by Wilson during his career as a playwright. In addition to certificates, plaques, medallions and framed photographs, the series also includes honorary degree hoods from several institutions of higher education.

Series Seven – Miscellaneous Materials contains a large group of materials that have purposes not directed to the writing of plays and scripts.
Series Seven is further divided into eight Sub-Series:

Series Eight – Photographs includes a variety of photographs ranging from contact sheets and photographs of plays in production to photographs of Wilson by himself and in the presence of his associates and friends. There are photos of both identified and unidentified individuals and groups. The Sub-Series also contains a small photo album that documents Wilson's naming as Playwright-in Residence of the Signature Theatre for the 2002-2003 season as well as other albums of photos about teaching at Arizona State University. In addition, the Sub-Series includes a multitude of identified and unidentified family snapshots and pictures.
Series Eight is further divided into five Sub-Series:

Copyright on all correspondence resides with the originator. Correspondence in the collection not written by Wilson may be consulted but not photocopied or published without the permission from the copyright holder. All rights of copyright, contractual rights or other intellectual property rights in the materials ("Intangible Rights") are reserved by the donor and/or his designees and licensees. The University has acquired no title or interest in or to the Intangible Rights. 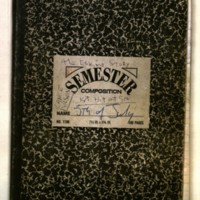 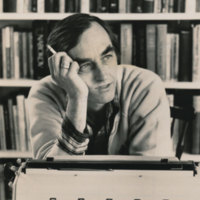