Helen Montgomery Jenkins (1913-2013) was born in Topeka, Kansas, and graduated from the University of Missouri with a B.A. in Journalism in 1935. She worked as a reporter and editor in Nebraska and Kansas before becoming editor of The Bermuda Beacon, a monthly magazine that was distributed to the 3,000 employees of the American air base located on the island. After World War II, she and her husband moved to New Jersey, where she worked as a reporter at the Plainfield Courier-News.

Jenkins began working in libraries in 1955 and earned her master's degree in library science from Rutgers University in 1961. She served as director of public libraries, held offices in the New Jersey Library Association, and published several articles in professional journals.

In the late 1940s, Jenkins and her first husband, Paul Jarboe Montgomery, inherited a collection of Kipling editions from Flora V. Livingston, Montgomery's great-aunt. Livingston was a rare book librarian at Harvard University's Widener Library, and she published a bibliography of Kipling's works in 1927. Jenkins began to buy materials to add to the collection. Her book collecting interests also included fore-edge paintings and pop-up books. Jenkins bequeathed her Kipling and fore-edge painting collections to the University of Missouri Libraries upon her death in 2013.

Kipling Collection holdings: 144 titles. The earliest item in Jenkins' Kipling collection is a second edtion of Departmental ditties and other verses (Calcutta: Thacker, Spink and Co., 1886). The collection also includes a number of early British and American imprints, as well as bibliographies and literature inspired by Kipling.

All titles are cataloged and available through MERLIN, the University's online catalog and can be browsed under the author heading Helen Montgomery Jenkins Collection (University of Missouri–Columbia. Libraries).

A manual of dates : a dictionary of reference to the most important events in the history of mankind to be found in authentic records. 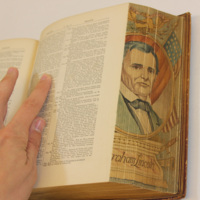