The collection consists of publications released by the Council, including bulletins, circulars,and general letters, as well as specialized publications on topics such as war bonds and wartime cooking.

The collection is available to all researchers, but it does not circulate. Request materials for use in the Special Collections reading room.

All titles are cataloged and available through MERLIN, the University's online catalog and can be browsed under the author heading Council of National Defense Collection (University of Missouri–Columbia. Libraries).

The Council of National Defense collection has been digitized by the University of Missouri and is freely available online through the HathiTrust. 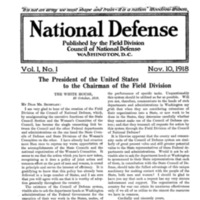 Browse Featured Items in the Council of National Defense Collection