Addison Morton Walker was born in Eldorado, Kansas in 1923, reared in Kansas City and graduated from the University of Missouri. In World War II he served with the U.S. Army in Italy as a 1st Lieutenant.

At the age of twelve he sold his first cartoon. At thirteen he was selling cartoons regularly and at fifteen he was drawing a comic strip, The Lime Juicers, for the now defunct Kansas City Journal. His earnings as chief designer at the Hallmark Greeting Card Company paid for his college education.

After the war and graduation from college Mort moved to New York City to be closer to the magazine markets. His first cartoons were rejected but within a year he became one of the top ten magazine cartoonists in the country. At the top of the magazine cartooning profession Mort decided to enter the comic strip field. Now twenty-six and married, he created Beetle Bailey and sold it to King Features Syndicate.

Walker married Jean Walker and in 1985 Catherine Carty Prentice. His children are Greg, Brian, Polly, Morgan, Marjorie, Neal and Roger. He lives in Stamford, Connecticut. His hobbies are writing, golf and photography.

The focus of the collection is on Mort Walker's visit to the University of Missouri in 1992 as a Scholar-in-Residence. A highlight of the visit was the unveiling of a bronze statue of Beetle Bailey. Prior to that occasion Walker donated original cartoons, animation cels, books, lithographs and posters to the University of Missouri Libraries. Newspaper articles about the visit are in the collection.

Additionally, original cartoons donated by Jean Walker are in the collection.

Also included are reproductions of Walker's work for Showme in 1946 and 1947. Showme was a humor magazine produced by students of the University of Missouri. Walker served as art editor and editor.

Books by Walker, including the titles donated by him, are in the Comic Art Collection. Consult MERLIN, the University of Missouri's online catalog.

The collection's catalog record.
The collection can be searched in MERLIN through the heading Mort Walker Collection.

The collection is available to all researchers. Request materials for use in the Special Collections reading room. Permission to publish original cartoons must be obtained from King Features Syndicate. 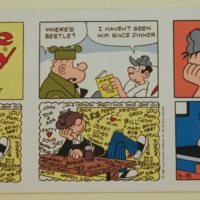 Original artwork for cover of Beetle Bailey, no. 83. 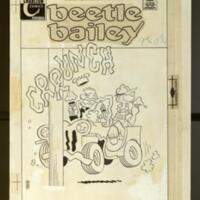