My works seek to define and document surface through the lens of the screen. The work lives between a number of varied states: screen vs. surface, real vs. unreal, the constructed event vs. the happened upon, as well as the distinction between the two alongside the value structures it creates. It is also contextualizing itself generationally, to the way different age groups of people view our phones, laptops, etc. My work aims to be these moments on the internet and the representation of these fragmented ideas or imagery in a familiar way. I incorporate the use of the crop and textural elements as a way to reference the format of the screen and connect the ratios of images with the ratios of screens. The meta aspect of the work frames its position as a critique of the internet, by the internet; without taking itself too seriously. The frame variation, perspectival crop and the documentary nature are aspects of the pieces that result in a work that is informational without being overly complex. The work aims to be placed somewhere between high illusion and impressionism of postinternet ideals. The way that we reference the ratios and a text placement is second nature and can be represented in shorthand in a way that the brain is still able to make the connection. The surface references the printed text, while the painterly marks document the textures and surfaces from a varied perspective, rather than just documenting an image. 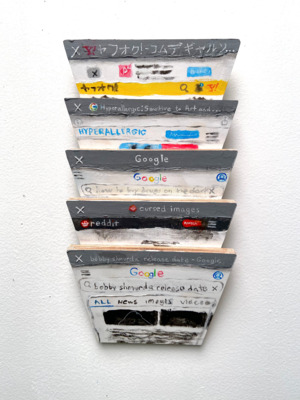 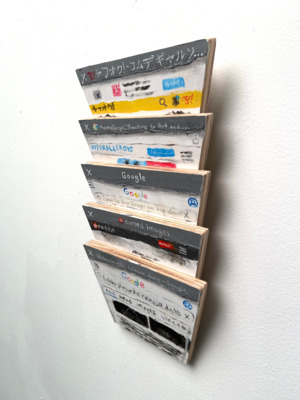 I've always loved Seth's art,with its present  days cultural meanings mixed with his clay works are amazing and I always take toke to just observe and understand ,all of his work makes me think and question how we life life as is.

This is so beautiful. When I see this I feel like the clutter that's in my brain is spread out in front of me. This is calming. I need to remember to clear my history.

I enjoyed Seth's presentation, and the way his Art was Added to it, he has Great instincts.

Seth (aka swamp lizard) is the coolest dude and his art is sick. i enjoy looking at it.

You killed it Seth. Your use of wood and three dimensional "canvases" for the paint are amazing. Hope I can check these out in person!

This is too cool. Amazing piece by Seth!

I thought it was good, I liked the way he did it, I liked all the pictures, he could have been louder, but, Great

Amazing art work, with such a deep meaning in his work.

Seth is an amazing artist. I always enjoy seeing new work of his. His talent never seizes to amaze me.

This work alone is amazing and has so much to offer his viewers. When I look at it I can see the norm of my life.  So many times we open our browsers and see this.  I personally work with several browsers open on a daily basis jumping from screen to screen all day. However, when I this I see the dimension that Seth provides apposed to the flat screens that we normally see. Then there is the texture that is displayed...it brings a whole new perspective to the display.

Keep up the great work, Seth!

The video was amazing and that boy was devilish handsome.

Really digging this direction, Seth. I particularly like the establishment of a physicality to the normally slick, ephemeral environment of the internet. The banal, everyday engagement we all have with the net is given a fresh, strange inflection through your decisions and approach to the images. Solid.

Thank you Seth for the wonderful presentation of your work